A little bit of history  Back in the heyday of the flex nib, one that flexed as readily as a slice of soggy pasta was known as a ‘wet noodle’ (whereas non-flex piston-fillers were, of course, dry fusilli).  Then, many years later, a nice chap by the name of Nathan Tardiff started making inks designed to work well in a flex nib, and decided to claim all the enterprise as one for Noodler’s everywhere.  Well, fair enough – we’ll feature some of those inks next week.  But one thing led to another and sooner or later a few pens to accompany those inks were, surely, inevitable. There’s quite a range of these Noodler’s pens now, but the model we’ve all tried is the Moby-Dick themed Ahab.

How it looks  A large rounded-end pen with a clip which faintly resembles a whale floating on the sea’s surface, about to dive.  The demonstrator versions are translucent rather than transparent, and there are some marbled opaque versions available now too.

How it feels  Big, but not uncomfortably so, and the resin is usually warm to the touch. For flexing purposes the grip is about right, even if the body is perhaps a little light; all the down-force is going have come from your own muscles.

How it smells This is admittedly an unusual category for a United Inkdom meta-review to consider, but in this case we’d probably be ignoring the elephant in the room if we didn’t mention the Ahab’s distinctive olfactory appeal.  Actually, it’s not so much an elephant in the room as a goose – it honks.  There is just no ignoring the distinctive whiff of the vegetal resin used to make the Ahab (and several other of the Noodler’s pens), and it seems to be one of those love-it-or-hate-it things.  Ross at Pure pens has got used to it, but tells us he always knows which part of his stock-room he’s in because the Ahab draw is detectable even with his eyes shut.  Ian finds it so objectionable that he’d be embarrassed to turn up with such malodorous matter at meetings.  It’s a hard aroma to describe but imagine, if you will, a rubber sack of forest fruits that’s been left out in the sun for a couple of days.  It does fade over time, and inexplicably some of us actually rather like it.  There is also the odd distinction that, alongside the recycle-ready steel fitments, the rest of the pen is biodegradable – although why you’d want to do that to a pen we can’t imagine.  Still, it’s not a plume-perfume for everyone, it’s fair to say.

How it fills  The Ahab comes fitted with a proprietary syringe-style piston.  This is simple to use and has an impressive capacity, so it’s a good way to get started.  Once you find an ink you want to write with all the time, it’s a fairly straightforward job to convert the barrel to an ‘eye-dropper’; Pure Pens also sell the o-rings recommended to make the seal watertight, and the ink capacity which results is huge, even if – like all eye-droppers – the price to pay is the occasional ink-burp on the page. 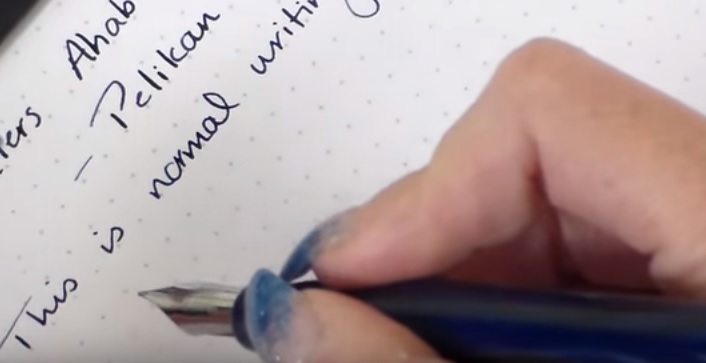 Crucially, how it writes…  The best reason – and honestly, probably the only reason – to reach for an Ahab is in order to try your hand at flex writing without the experiment costing you a fortune.  This it achieves quite comfortably.  The nib is semi-flex really, but it’s a good introduction to the process of generating line variation with differential pressure, and unlike exotic gold flex nibs it’s cheap enough that you can afford to give it some abuse while you’re putting it through its paces.  The results can be rather impressive, once you get used to it!  These days a lot of Ahabs are despatched with a non-flex nib included too, which is a considerate touch even if it’s a bit pointless really; if you want a non-flex nib, there are plenty of other choices out there in this price range.

Pen! What is it good for?  It’s great for trying a flex nib for the first time.  Once you’ve got the bug and started moving on to posher flex nibs, as is quite likely (be warned!), it’s good for jotting shopping lists and the like.

VFM  Even if it should really come with a free nose-peg, this is impressively inexpensive for what it does. Only FPR flex options really compete.

If this isn’t quite your cup of tea, but almost…  Then have a look at the many flex-nibbed models available from FountainPenRevolution.  Some of those are a little ‘aromatic’ too, but starting flex the affordable way makes good sense.

Our overall recommendation  If you’ve always wondered what the flex fuss is all about, don’t want to spend a fortune, and aren’t too particular about your choice of cologne, go for it.

Where to get hold of one  Naturally we’d recommend heading to Pure Pens, the sole ‘proper’ UK stockist – if for some reason they don’t have the colour you’re after, they’re happy to order in more stock too.  Ebay is also a useful import source at times, but the waiting times can drag rather.

Thanks to  Pure Pens for lending Ruth an Ahab and selling Scribble one too.