A little bit of history  The Calamus fountain pen is part of a three-piece writing instrument set also featuring a ballpoint pen and a rollerball pen. This very distinctive pen set has been put together by the German distributor Aratrum as a leaving gesture from their outgoing head of operations, Mr Pflug.

Aratrum is apparently one of Germany’s biggest writing product distributors and their list of prestigious companies include: Kaweco, Platinum, Recife and ACME to name but a few. So yes, this was always going to be a proper bit of kit! The look and feel of this range is the result of two decades of handling and selling pens, and it looks like Herr Pflug has tried to incorporate all his favourite details.

The term CALAMVS is a nod to the Roman reed pen, made from a leaf of Acorus calamus; an intriguiing plant also known as beewort in English, which apparently has psychoactive properties and was even supposedly used by Walt Whitman as a metaphor for ‘forbidden love’ between gentlemen. Golly.

How it looks The Calamus comes in a slick matt black cardboard tube with minimal tasteful graphics in white. The pen is made from brass with a black chromium finish and is piston filled from the back end with the twister hidden under a small screw-closure section. The main barrel features two ink windows, one on each side, with three engraved decorative rings. The clipless cap seamlessly pops on and off and features two engraved rings, a shallow engraved logo and a small steel stud to prevent roll on the opposite side. The Schmidt nib unit features a smoky grey medium nib with an iridium point.

How it feels The pen is made of brass and has a nice heft to it. Uncapped, the balance point is in the middle of the ink window – if that’s by design, it’s a nice touch. In the hand when writing the balance is towards the nib, which many of us prefer but maybe a slight issue for left-handed ‘over writers’ who seem to prefer the weight towards the rear, possibly as a counter to the angle they have to rotate their hand when writing. Another possible issue is the two ink window cutaways; one of our reviewers thought they felt a little sharp. 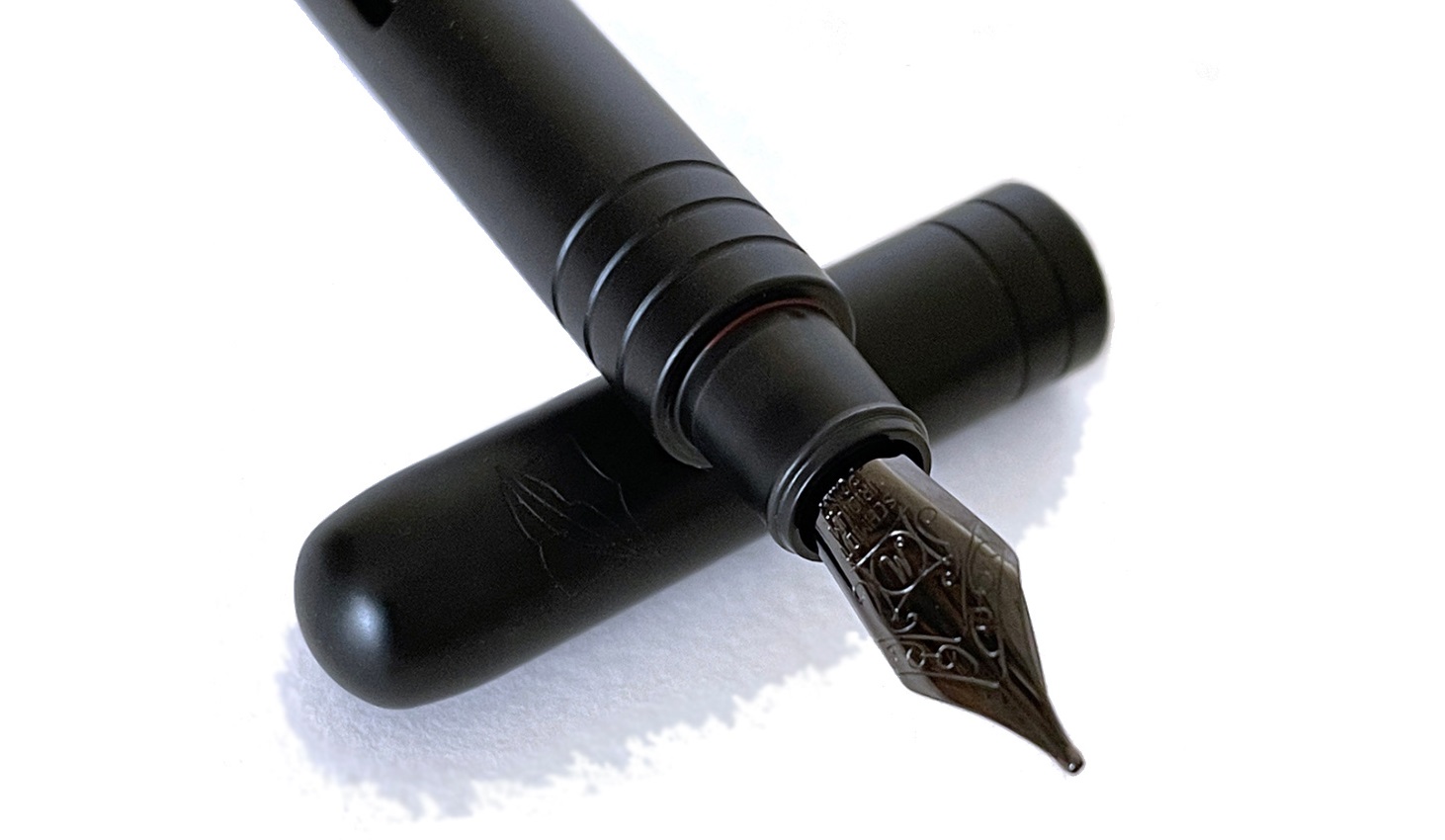 How it fills At the back of the barrel you have a blind cap, which once removed reveals the end of a captive piston filler. To fill, carefully twist anti-clockwise until fully down, put the nib into the ink source and twist clockwise to fill. One of the design features is the two long and prominent ink windows sitting opposite each other. It is very easy to see the ink level through these when filling the pen.

Crucially, how it writes…  The nib is a ruthenium-plated Schmidt size #5. The pen was tested on Tomoe River paper and in a Rhodia Webby with no issues whatsoever. It feels comfortable in the hand and is very smooth to write with. Interestingly there was a tiny bit of squeaking audible from the iridium point for the first sentence or two.

Pen! What is it good for? This is unquestionably a good quality pen with a unique look; it works for handwriting, and also as a fashion accessory.

VFM  Remembering this is a limited edition pen, made of brass, and with visual/tactile features that require work, well it may surprise you that at present the pen is just €59. Unfortunately, postage to the UK is another €25, which is a pity, but if you happen to be in Deutschland…

Our overall recommendation  For this money the Calamus is a great-looking pen for both writing and accessorising. If you have contacts in Germany, bag one!

Where to get hold of one  The Calamus was provided by Papier und Stift, where you can also buy the devil-stick or gel alternatives, presumably for the Muggles in your life.

Thanks to Anja at Papier und Stift for providing the pen to test.