A little bit of history  Much as we all mourn OMAS, ink wasn’t their strong point. Their spiritual heirs, Scribo, have apparently set out to correct that. We put the whole range to the test.

How it arrives Packaging isn’t everything, but my goodness do Scribo make an event of it. The cubic cardboard boxes slide out like drawers to reveal stackable square-based bottles which positively shout “we’re special!” – and so they are. 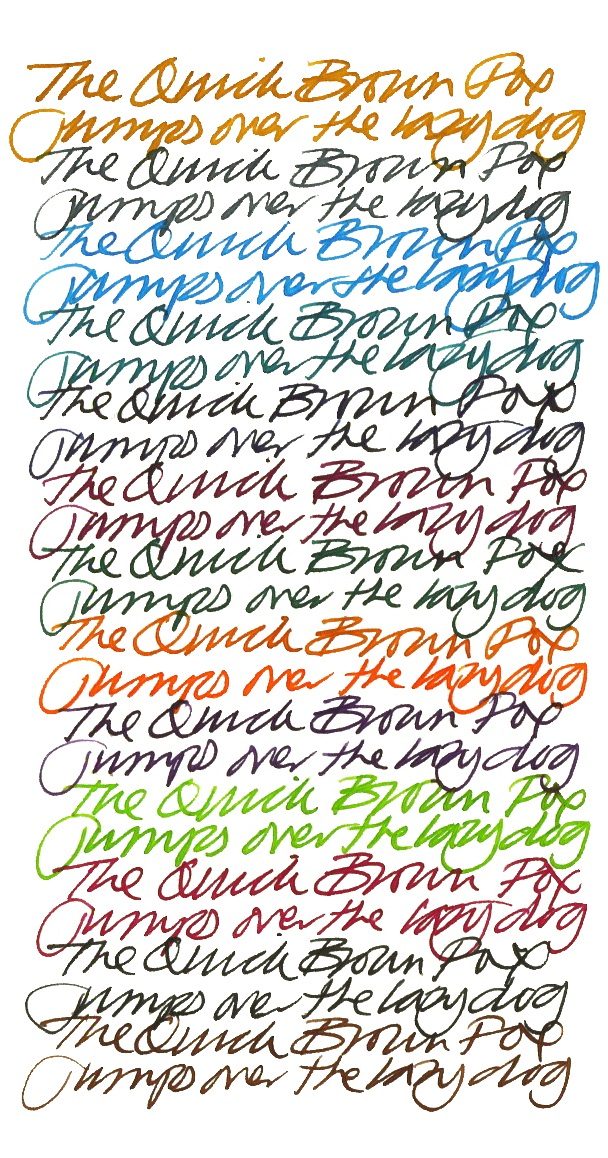 How it looks  This is a big range, and the different components deserve detailed attention:

The inktelligentsia The orange and purple offerings immediately won many fans, the purple dark enough to take to work and the orange stiff competition for any similar shade. If you have only the pocket money for the one bottle, either would be a good place to start. 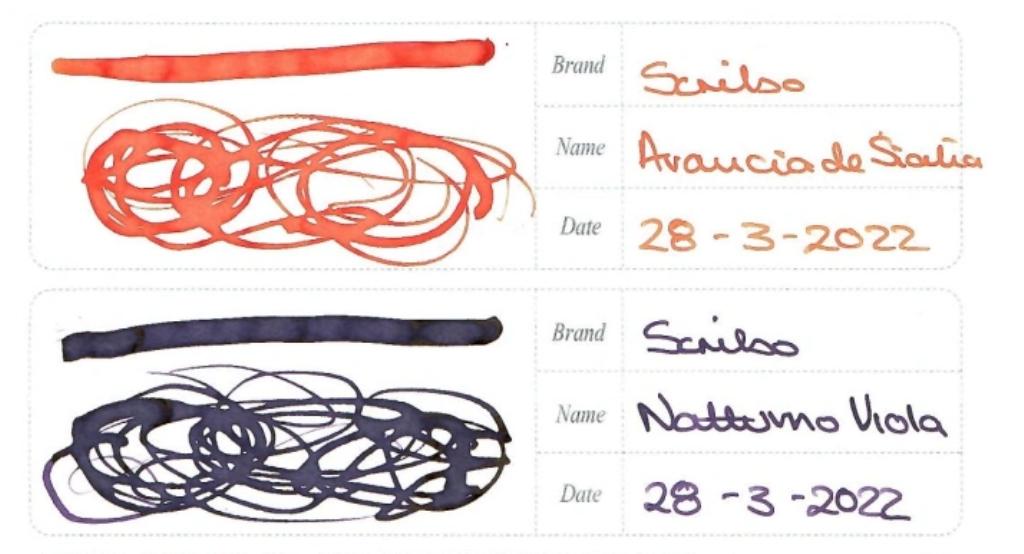 The patricians Some sturdy blues and very black black here, with an empirical link; Capri was the childhood home of Caligula, uncle of Nero. 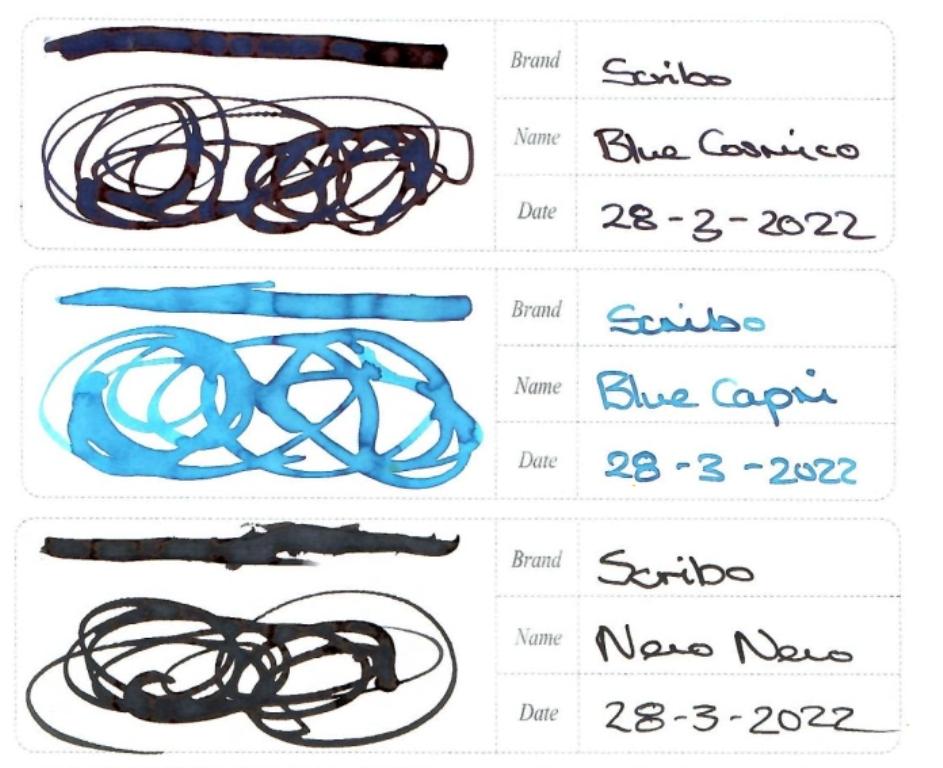 The communards Should you wish to raise the red flag, you can do so with a juicy pomegranate, or, err, with a nice Chianti. 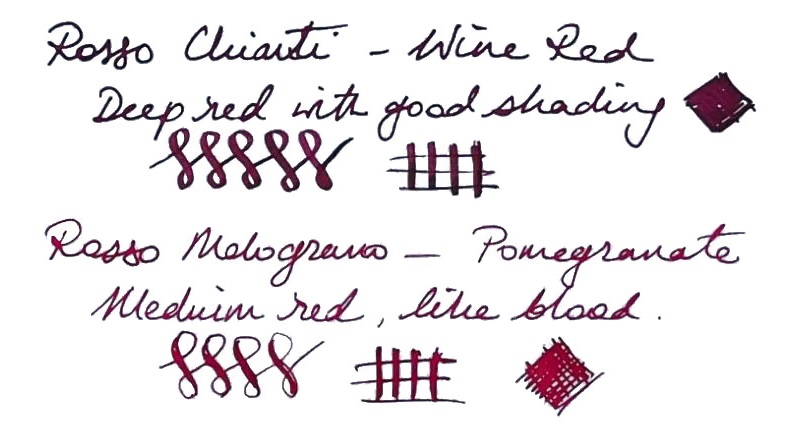 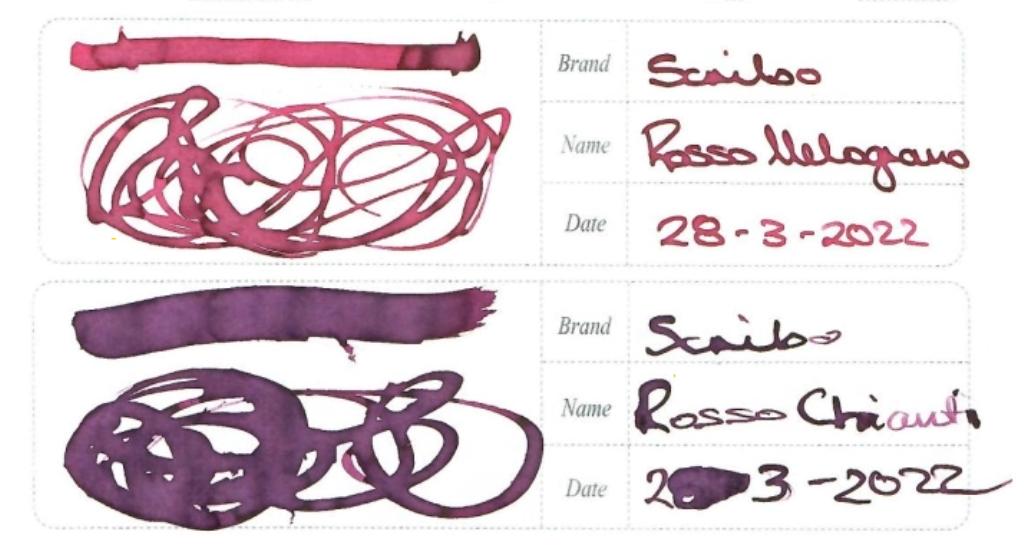 The ecologists That’s a lot of green for a modest range, but there’s a shade here for everyone – with a civilised teal probably taking the prize. 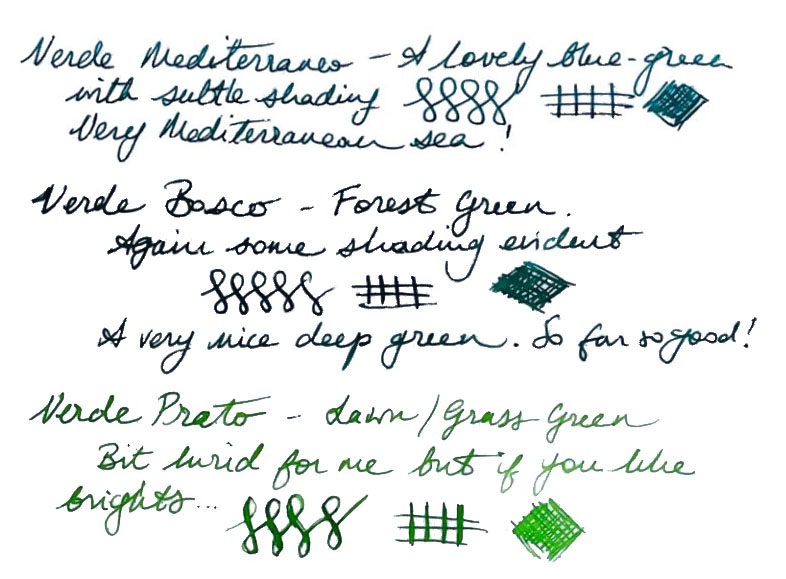 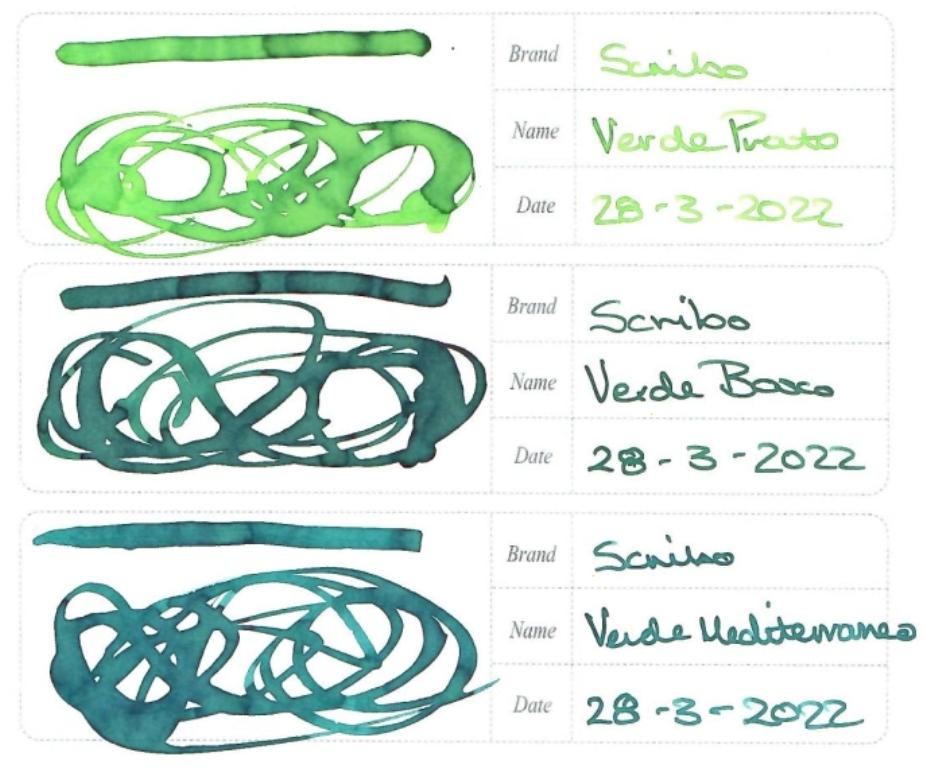 The dullards It’s a little harder to get excited about browns and greys, but they do have an audience – and these at least do it with a bit of class. 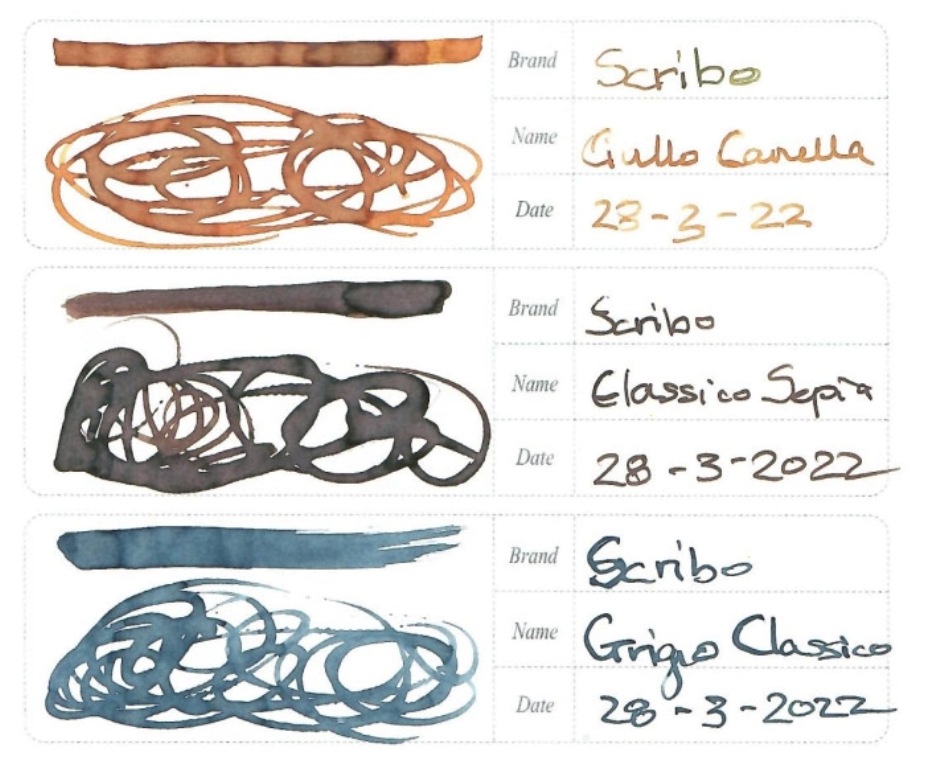 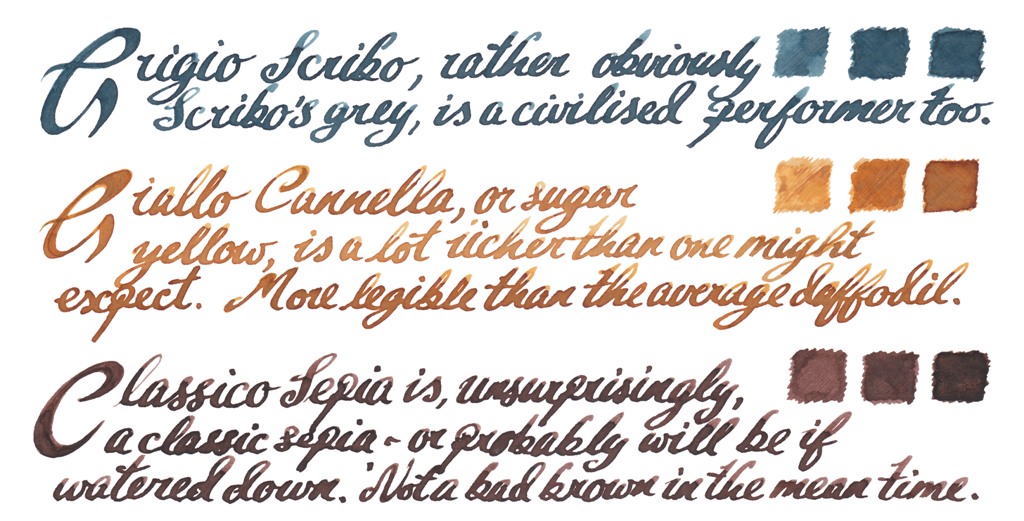 Crucially, how it writes…  Actually, that varies: some were found to be a touch dry for our testing panel. However, as Scribo pens themselves tend to run very wet, it’s a good match for the right nibbage.

Ink! What is it good for?  If you work in design or fashion, perhaps you can take one of these inks to the office. For the rest of us, this is probably best for writing a diary, making private notes or correspondence with friends – and none the worse for that, of course.

VFM  These aren’t cheap, by any stretch of the imagination, and are priced comparably with Iroshizuku inks. As a result we would hesitate to advise rushing out and buying the whole range, as the outlay would be equivalent to the price of a very good pen. But if you have treated yourself to a nice Scribo pen and want something which complements it, a bottle of your favourite shade might not be too crazy an indulgence.

The only way is ethics  The inks are made in the EU (we think) and the packaging is eminently re-usable, so it scores fairly highly on this front. 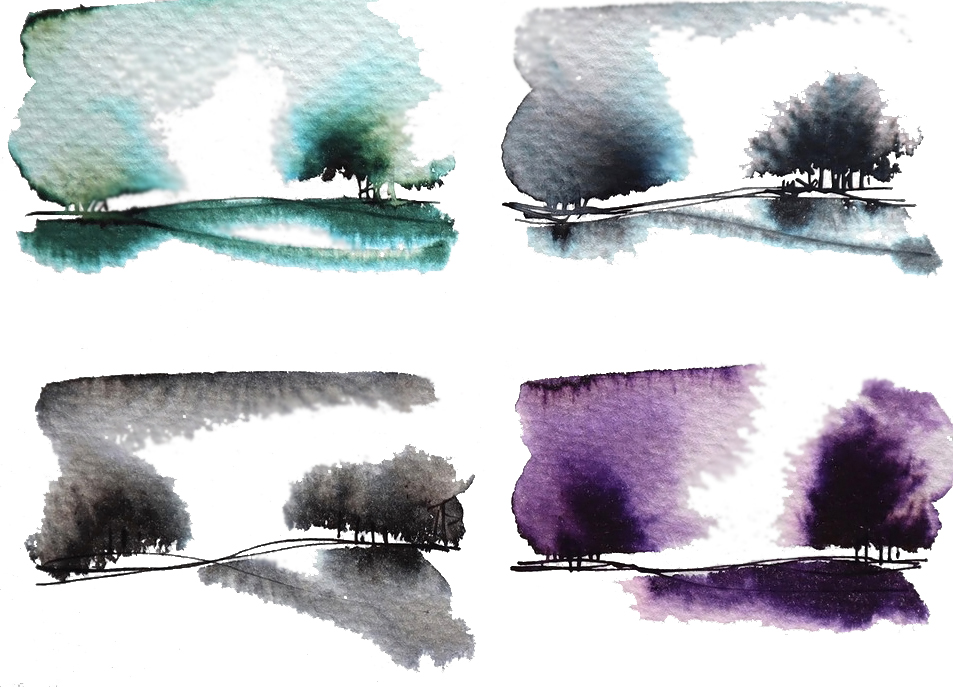 If this isn’t quite your cup of tea, but almost…  You could try some KWZ – although be prepared that a Scribo pen thus equipped may double as a small fire-extinguisher in emergencies. In terms of the colour palette, Italy may have little to compete with this but over in Japan Sailor and Pilot both have ink ranges which cover similar ground, at similarly ‘premium’ prices.

Our overall recommendation  Scribo have done their pens justice with some grown-up inks in really impressive packaging, but they do cost accordingly. Our tip would be to choose just the one which which matches your pen.

Where to get hold of some  Our samples were donated by Write Here, the only UK stockist we’re aware of thus far. If you happen to be in Bologna, Scribo may also sell direct. 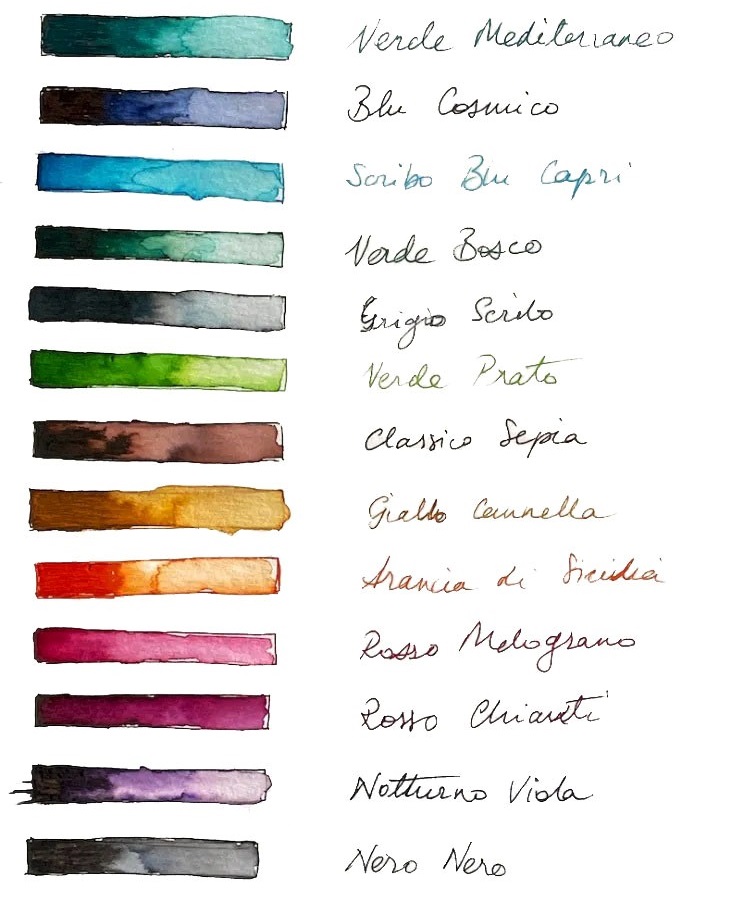 Thanks to  Write Here for the samples 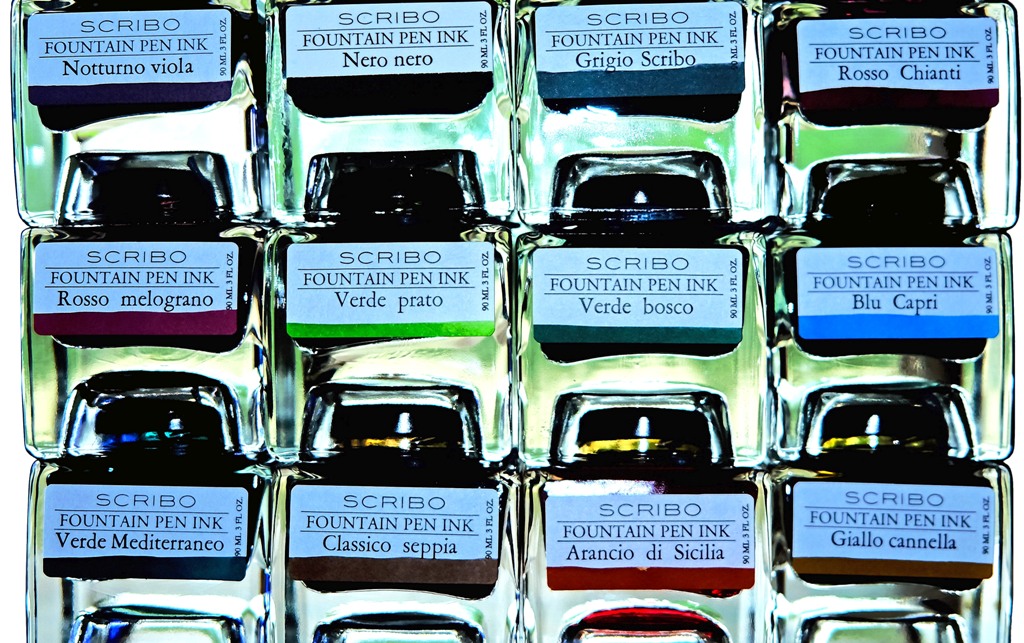