A little bit of history  The Pen Shop is a rare beast – a small chain of actual bricks-and-mortar writing kit specialists, with a website attached.  Based in the North East of England, they’ve been epitomising the archetypal canny Geordies recently by creating their own  brand, Dex.  There are two sizes of Dex fountain pen, the larger ‘soft’ (which describes the plastic of the body rather than denoting nib feel), and the smaller ‘compact’, the mini version that we’re reviewing here.  The Dexs, Dexa or Dexii (depending upon your etymological preference) have been around for a few months now and are attracting quite a fan-base in the fountain pen message boards, so we were very pleased when the Pen Shop sent United Inkdom its first dedicated test samples…

How it looks  It looks pretty good, for the money.  The clear barrel shows off the ink colour in the cartridge rather nicely, and it looks like it it’s going to be a fun thing to pick up and play with – which, actually, it is! 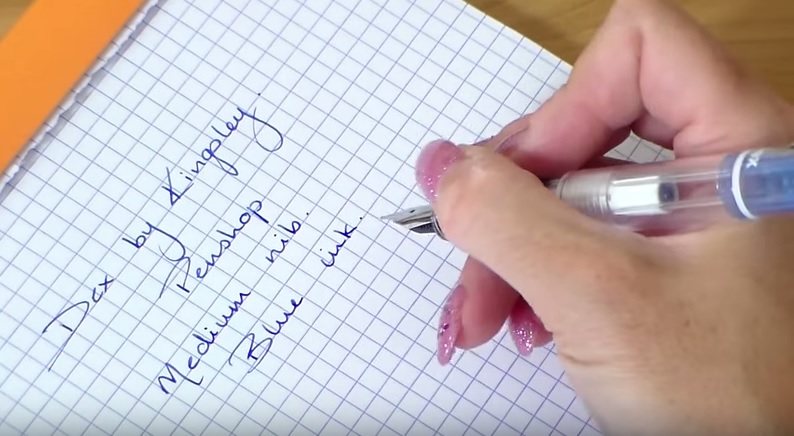 How it feels  With the cap on, we think it should be about the right size for most people’s needs, and it posts fairly securely so it feels reasonably robust too.  It’s very light indeed – the other end of the scale from the chunk of heavy metal we reviewed last week – but that’s often good news for beginners.  The rubber section is slightly shaped to add good pen posture, which is again quite helpful for anyone getting to, err, grips with writing properly.  It feels comfortable to grab and have a go with. 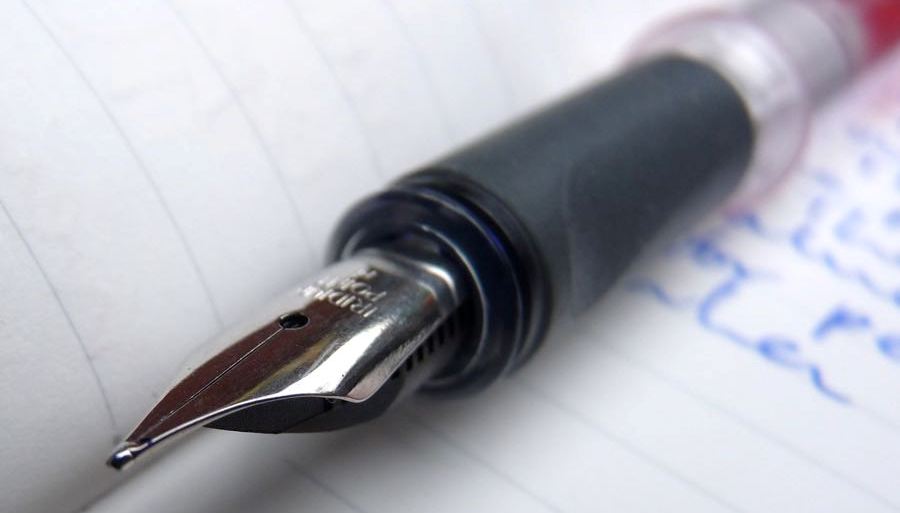 How it fills  This is a straightforward whack-in-a-cartridge job, and for the likely purposes of most owners that should be ideal.  The blue it comes with is perfectly adequate, and of course there are many tempting alternatives from Diamine which we’d recommend.

Crucially, how it writes…  Considering the tiny price tag, it writes rather amazingly.  The Dex pens use a steel nib made by Bock, whose reputation for quality probably needs little introduction to most people reading this.  It’s only available in M size as yet, but we don’t blame The Pen Shop for starting there as it’s a good size to get started with.

Pen! What is it good for?  This is one for the classroom, without a shadow of doubt – indeed, our test samples have been enthusiastically ‘adopted’ by pupils and teachers already (and cats, of course).  Some of our reviewers are just little envious that there wasn’t a school pen this nice to use when they were getting started too…

VFM  For a beginner’s fountain pen. this is just about the best value for money there is.  High-street stationers will sell you pens which perhaps look a little shinier on the outside for only a little more, but for £10 this has everything a budding scribbler could need; that Bock nib really is built to take some abuse and still write well, and we suspect (although for obvious reasons it has been neither confirmed nor denied) that the body is made by Diplomat.  So it’s both Geordie and German, and should be flying off the shelves as an export if there’s any justice in the world… Auf Wiedersehen, Pen. 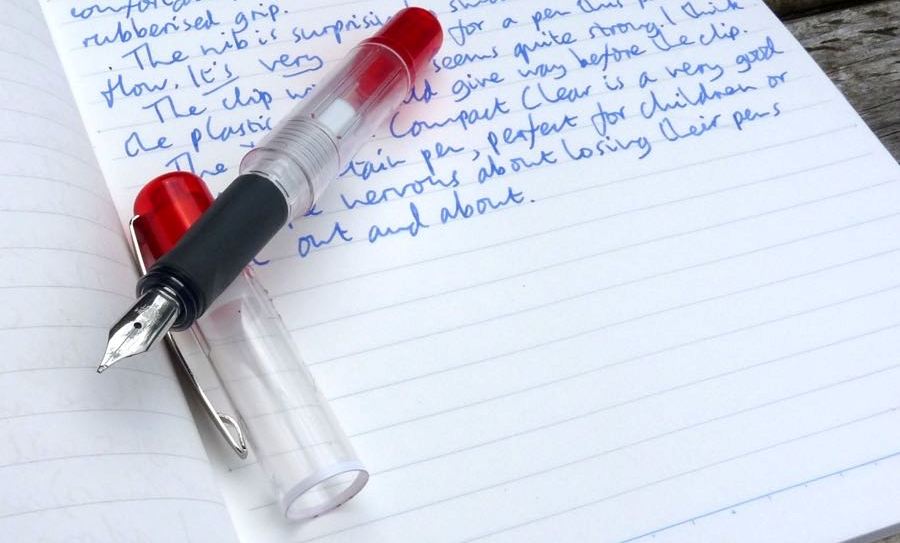 If this isn’t quite your cup of tea, but almost…  then other purveyors of appalling puns based upon 1980s television comedy dramas are available.  But, getting back to the Dex compact, the diminutive size might be the one thing that puts off some potential purchasers, but the larger Dex ‘soft’ model solves that quite easily.

Our overall recommendation  Buy one of these for a child who you want to see enjoying writing  – and a bigger Dex ‘soft’ for yourself!  This is brilliant value, and the Dex fountain pen deserves to be a success.  We’d really like to see a wider range of nib sizes available (and maybe an italic too), but we’re informed such developments are on their way soon… 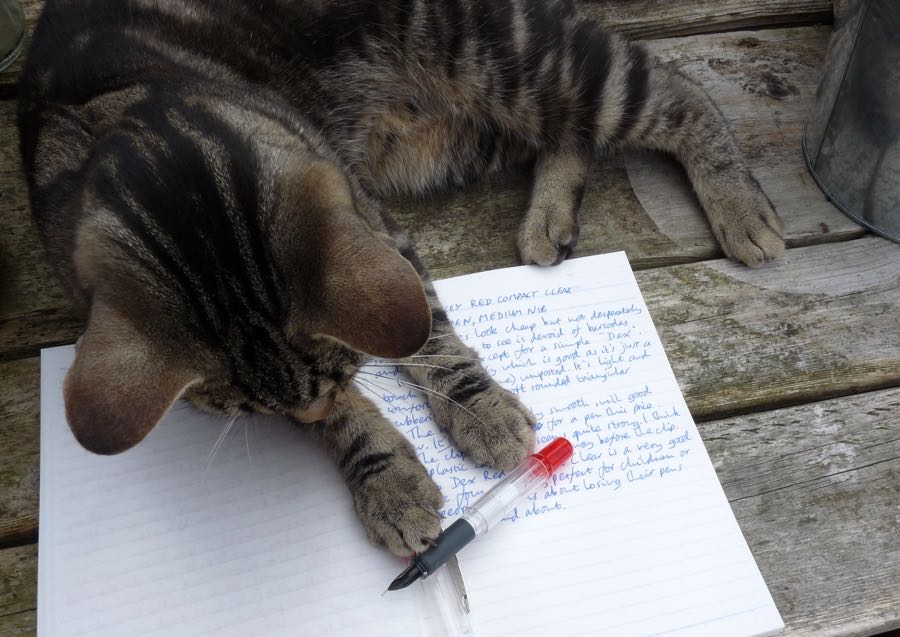 Where to get hold of one  Obviously, enough, from the Pen Shop.  You can drop into one of their bricks-and-mortar establishments if you wish, or order direct from their website.

Thanks to The Pen Shop for providing review samples and a handy discount for the first few weeks after the meta-review was published.  We do love a bargain…

A little bit of history  Kaweco go back a long way, and this design does too – to the 1930s, in fact, by way of a few company ups and downs and a rebirth via the Gutberlet family.  The Sport remains a classic, and a rightly popular one – it’s the pen that the term ‘small but perfectly formed’ could have been coined for.  Our first reviewers all have their own Sport story; Ian Hedley actually got started in fountain pens with one, Scribble Monboddo’s review of a basic plastic Sport ‘Classic’ is one of his most frequently-read posts, and Ruth Hanson has promised never to get it mixed up with the lipstick ever again… but they have all been impressed already.  So when Kaweco offered United Inkdom the chance to review the new nakedly-brass Sport, well, how could we refuse?

How it looks  It looks seriously handsome, and we’re unanimous about that.  The plain brass finish isn’t plain at all; it does very bouncy things to reflected light, and with regular use it will take on a well-loved sort of patina.  So few manufacturers have had the courage to use plain brass without hiding it behind paint that it also looks seriously distinctive – that shape, in that colour, with that shine, and it could only be one thing.  Frankly, we’re all smitten.

How it feels  In a word, heavy.  But in a good way.  Brass is not the lightest metal, and the cap, barrel and section are each lathed from solid blocks of the stuff.  As this is such a small pen, the weight is pretty much perfect; you certainly know the pen is there when you pick it up, but it isn’t tiring to write with.  In our view, it’s spot on.

How it fills  Now this is a small pen, and that involves some sacrifices.  If you want exotic filling systems, a miniaturised pocket model is probably not the place to start!  There is space only for a small international cartridge, but that’s not such a bad thing; there are many good ink-makers producing pre-filled cartridges these days, and getting any ink of your choice into one with a syringe is really not so difficult.  There is a tiny squeeze converter available too, but the ink capacity is so minuscule that we wouldn’t bother.

Crucially, how it writes…  Well, as always that depends upon the nib!  Kaweco nibs are interchangeable and screw-in quite easily, so there is a fair range of options to choose from.  Two of our reviewers chose the standard round steel nib, and that certainly works well enough; it’s not especially distinctive, perhaps, but for a small nib it writes quite enjoyably.  Also available, and sampled by one of our three reviewers, is a proper little gold nib – and this 14k number writes very nicely indeed, with the combination of smoothness and springiness you’d expect.  So either way, it’s a real pen, despite its proportions, and all of our reviewers found it a pleasure to use.

Pen! What is it good for?  We’re not sure that this is one for the boardroom, and it’s probably a bit on the expensive side for the classroom.  But popped into a jacket pocket or a handbag, it’s pretty much the perfect thing for whipping out on the spur of a moment to note down ideas while out and about – and if those ideas turn out to be long-ish ones, your writing arm won’t get too tired either.  Better still, everyone who sees it will want to ask all about it; there’s a reason we started with this review, after all…

VFM  While not exactly a cheap pen, the brass body itself is excellent value; it’s solid, comfortable, and the appearance will gradually change to a nicely ‘vintage’ look with extended use.  None of the three reviewers have any intention of letting this leave their collections (or indeed, their persons, it seems!).  So the Brass Sport looks like great value for money at its standard retail price.  The balance sheet looks a bit more questionable when the gold nib is added as, lovely as it is, at the moment it can only be obtained as an expensive add-on accessory; it’s currently on sale for £99 in the UK, which is £34 more than the pen itself costs, and that’s difficult to justify.  We have suggested that Kaweco consider how to ‘bundle’ the pen with a gold nib ready-fitted at a more attractive price – and the CEO is exploring the options to do just that.

If this isn’t quite your cup of tea, but almost…  Then take a look at the Lilliput, another Kaweco model which The Pen and Inkwell will be reviewing soon.

Our overall recommendation  Go ahead and get one; you won’t regret it.  That goes for any of the standard steel nibs, at least.  For the gold nibbed-version, we’d suggest holding on for just a little longer; once Kaweco and their retailers have had an opportunity to combine brass and gold as a more reasonably-priced package it will become an irresistibly attractive option.

Where to get hold of one  We’d advise buying from a specialist pen retailer; in the UK, Kaweco is stocked by several of the best including The Writing Desk, Cult Pens, and Andy’s Pens, all of whom know their stuff.

Thanks to  Kaweco for lending us the Sport (and subsequently helping us find a way to keep them, as we all like them so much!) – that doesn’t influence our meta-review, but we do appreciate it.