A little bit of history  This special edition harks back half a century, apparently to a school pen originally.  It won’t be around for too long, we suspect…

How it looks  It looks distinctly vintage, which is probably the intention.  One for those who prefer understated class rather than in-your-face bling, for sure, but it does stand out from modern designs.

How it feels  Based on the M200 (from which it borrows its mechanicals and proportions), this is a very light pen, even when full of ink.  It still feels fairly robustly constructed, nevertheless.  This is a small pen in terms of length, which also has an unusually narrow section; whether that’s desirable is very much a matter of personal taste.

How it fills  This is fitted with Pelikan’s rightly famed piston mechanism, which shouldn’t raise any concerns.  In an emergency, you can also unscrew the nib and pour in some ink from syringe or pipette, eyedropper-style.  The barrel holds enough for everyday purposes, and includes an ink window so there’s adequate warning when you’re running low.

Crucially, how it writes…  Well enough, for most.  This is a gold-plated steel nib with some rather nice engraved squiggles on it, and it has a bit of ‘bounce’ as well as the usual Pelikan smoothness.  The unit we tested doesn’t always work happily with all inks, and even some of Pelikan’s own ink was a bit dry.

Pen! What is it good for?   Vintage enthusiasts, we imagine, and especially those who aren’t concerned about getting a gold nib and want something which looks distinctly different from many modern pens. 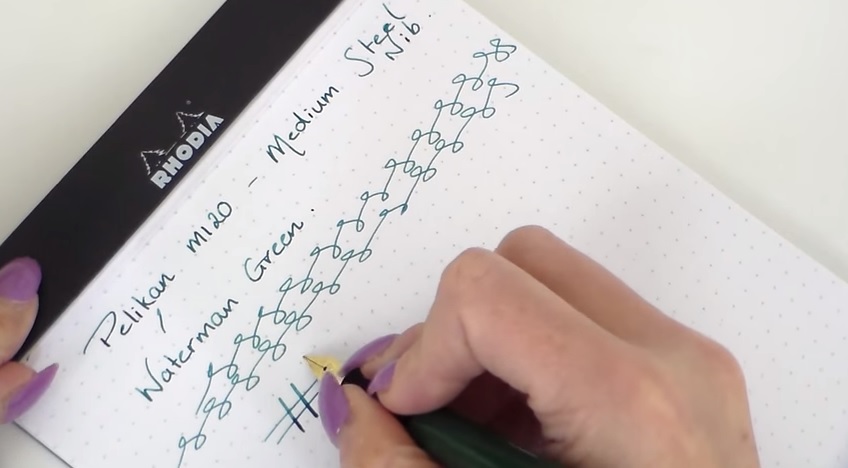 VFM  £120 is not too bad for an unusual and well-made pen like this, we think.  It’s possible to get a piston-filling fountain pen with a gold nib for the same sort of money, it’s true, but it’s unlikely to have quite these distinctive looks.

If this isn’t quite your cup of tea, but almost…  Buy it anyway – there’s very little immediate competition, other than vintage Pelikans.

Our overall recommendation  If this floats your boat, don’t delay – it looks unlikely to be around for ever.  But if you just want a small Pelikan and would rather not pay quite so much, a standard M200 is also worth considering.

Where to get hold of one  Pelikan specials go to Pelikan specialists.  As Pure Pens lent us this test unit, naturally enough we’d suggest that as a first port of call.  We know that The Writing Desk, Cult Pens and Andy’s Pens also have M120s in too – although at the time of writing one of these retailers had already run out stock! 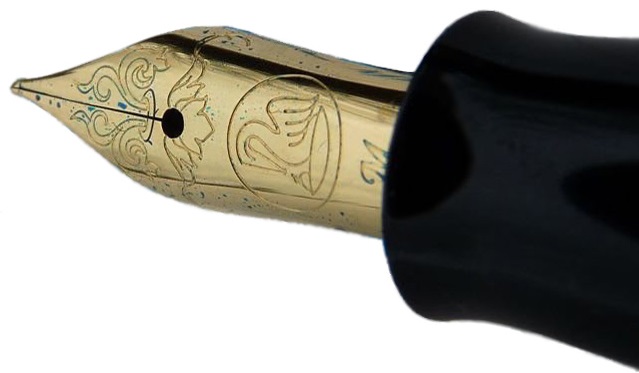 Thanks to  Pure Pens for lending us the M120 – they still have just a few left.

Diamine 30ml sample bottles are brilliant; a huge range of good-quality inks, at very reasonable prices, and they’re even British too.  There’s just one catch – those bottles.  The plastic is fairly robust, but so many pens just can’t get their sections through that tiny neck – and the bottom seems such a long way down.  That’s fine if you’re filling an eye-dropper, but there’s more to nibbage than that filling system, after all.

There is another way and that’s to buy one of Diamine’s remarkable box sets; both flowers and composers come in rather nice glass cubes with a sufficiently wide neck to accommodate most pens.  But they don’t sell them individually!

So we needed another other way and our newest United Inkdom member has found it. Rob has explored the arcane websites of various pharmaceutical and catering suppliers and assembled a fascinating test-pack of alternative glass and plastic bottles along with the pipettes to fill them up.  Scribble and Ian have been trying them out too – and you can win one of these experimenting kits as well (see below)!

The results are impressive; for just a few pennies you can get all sorts of hardy alternatives. Admittedly one of the ‘biological sample’ bottles acquired a rather suspicious crack in the post, but all the glass bottles survived and Ian tested the full set for leakage without any tell-tale dribbles appearing. Our team consensus is that alternative glassware is probably the way forward.  For further details and links to suppliers, see Rob’s extensive blog article.

These alternative bottles make for handy mixing kits too – all you need is a syringe or pipette and you’re ready to roll.  There’s even likely to be a new purple on the scene soon as a result… 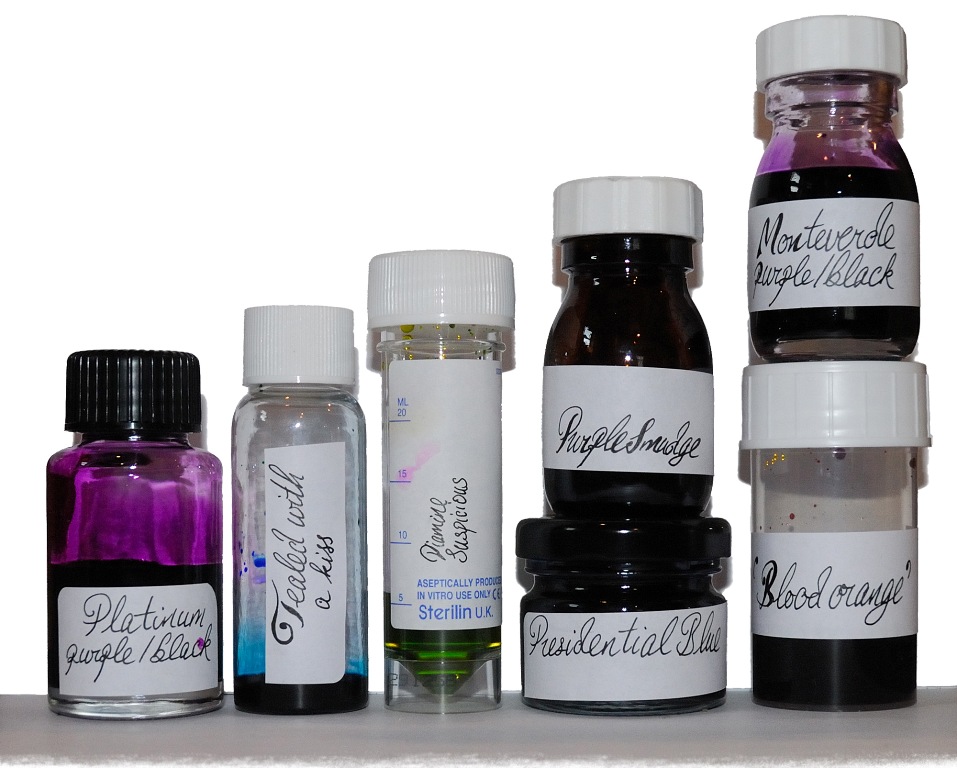 You can win one of these kits too, along with a fine 30ml Diamine sample to decant into the bottle of your choice and a dip pen for testing your inky cocktail creations. Just leave a comment below telling us which colour you’d like to be able to dip a big fat nib into  – we’ll pick a winner at random but we’re genuinely curious to know! NB this competition has now closed and the kit is winging its way over the Atlantic, but comments are still welcome!