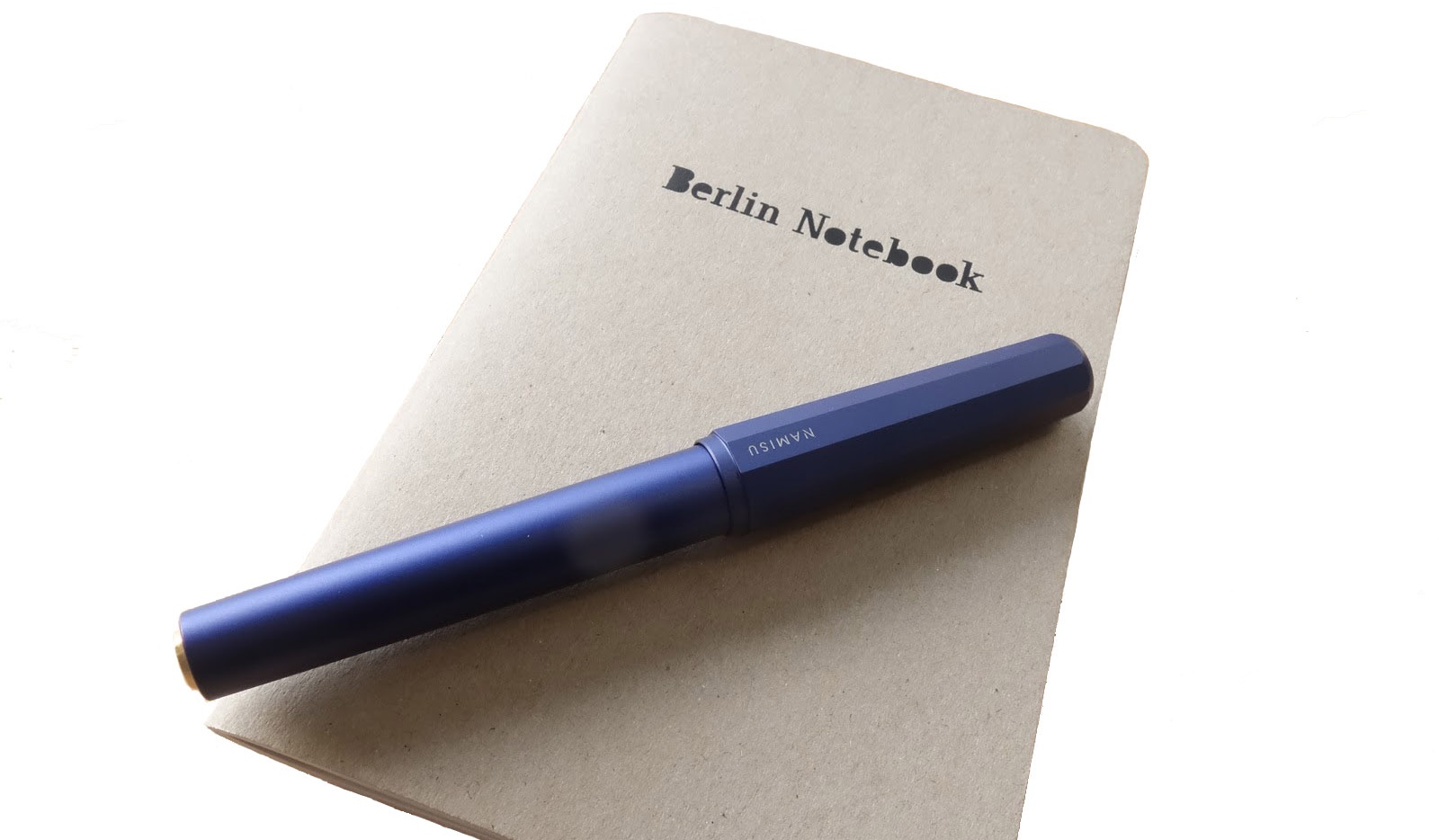 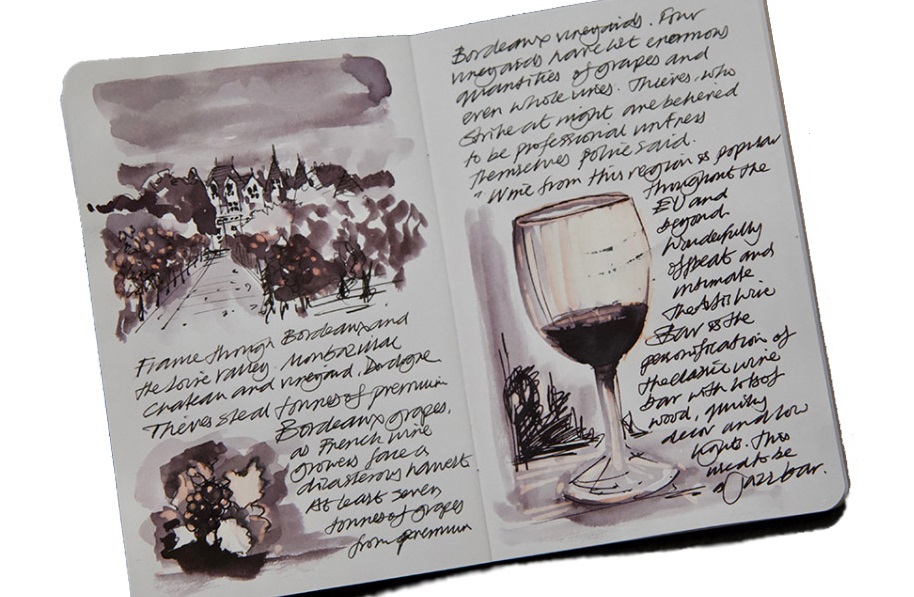 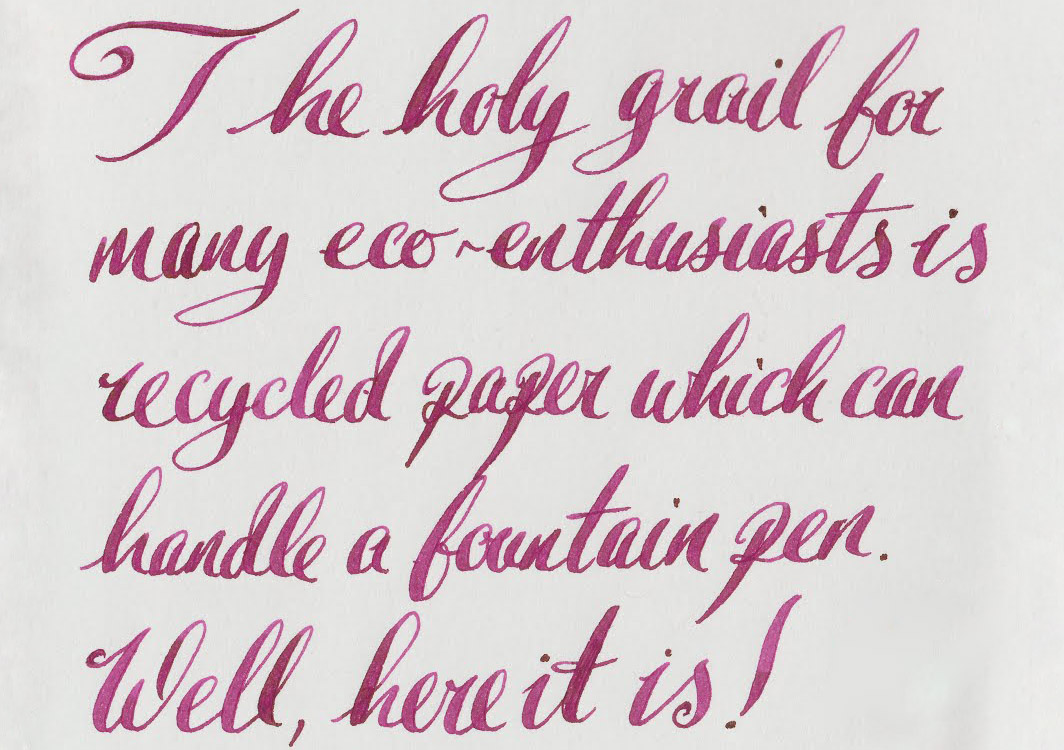 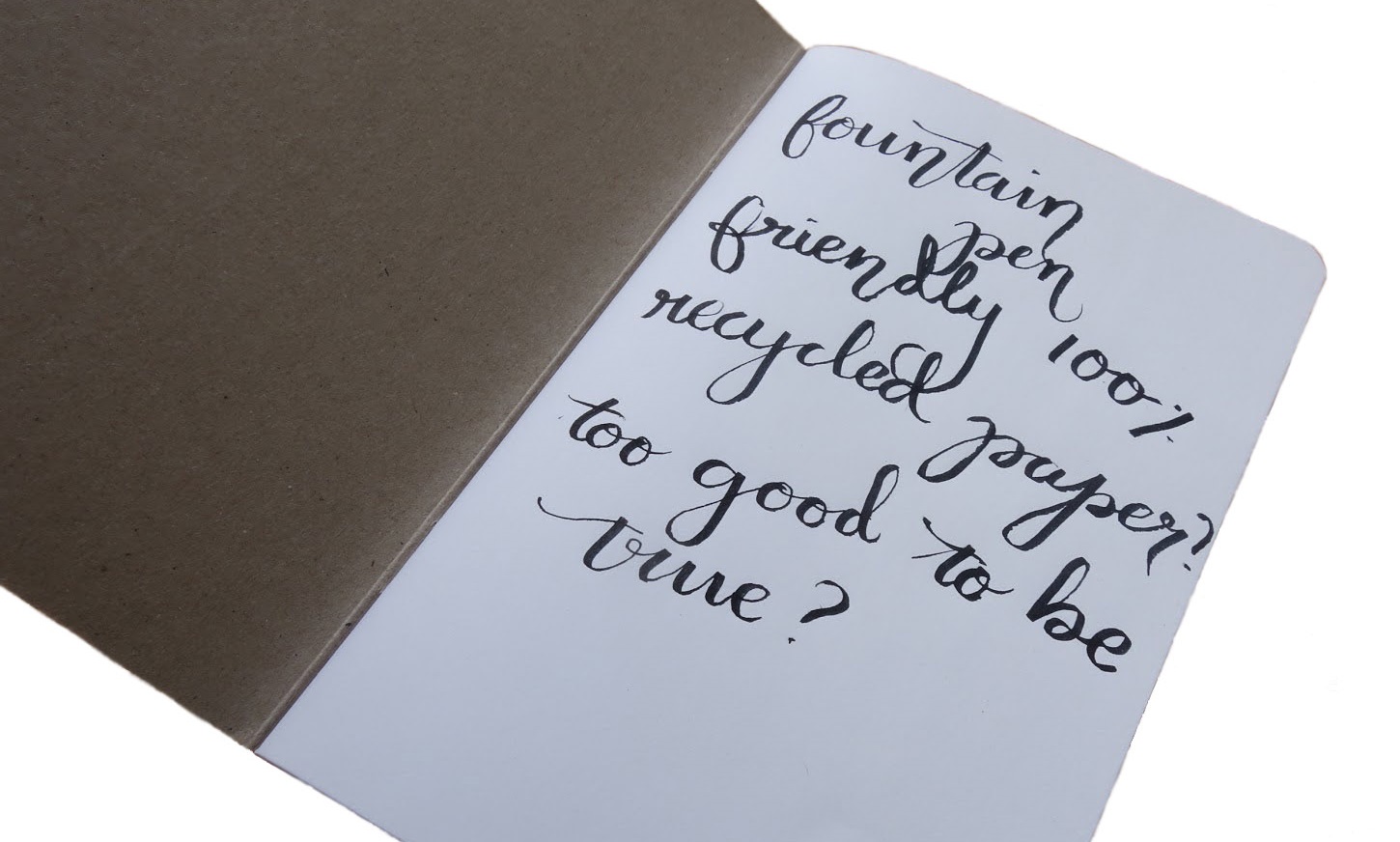 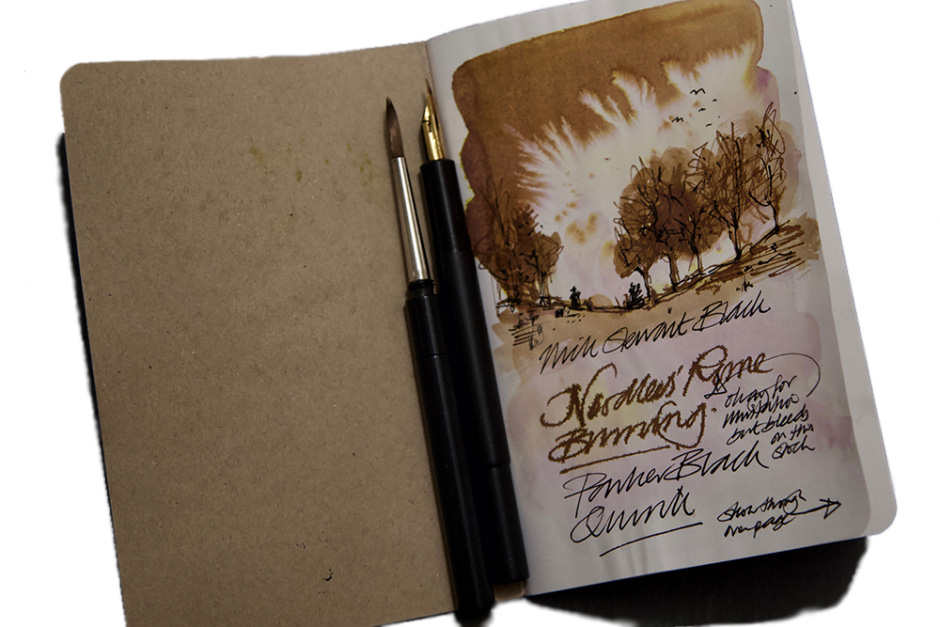 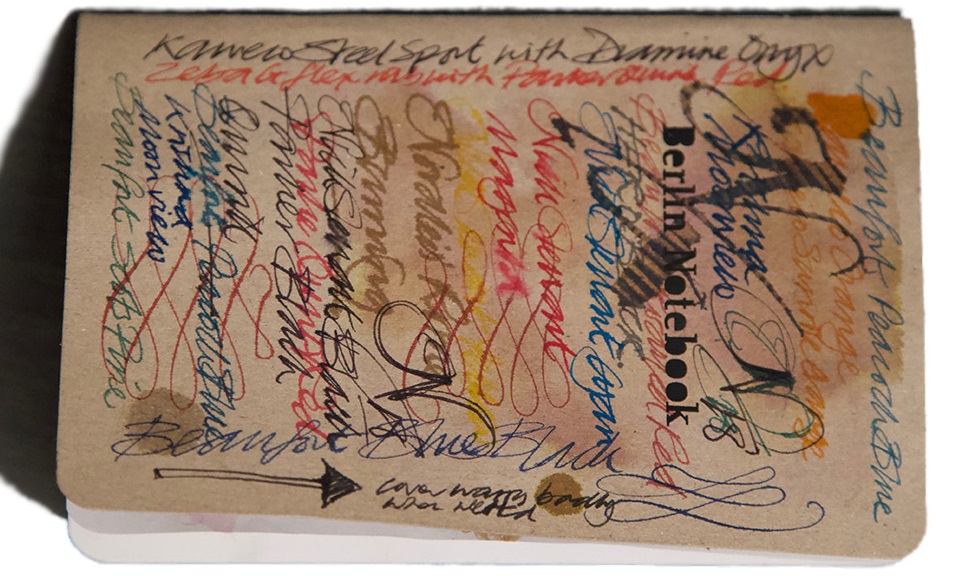 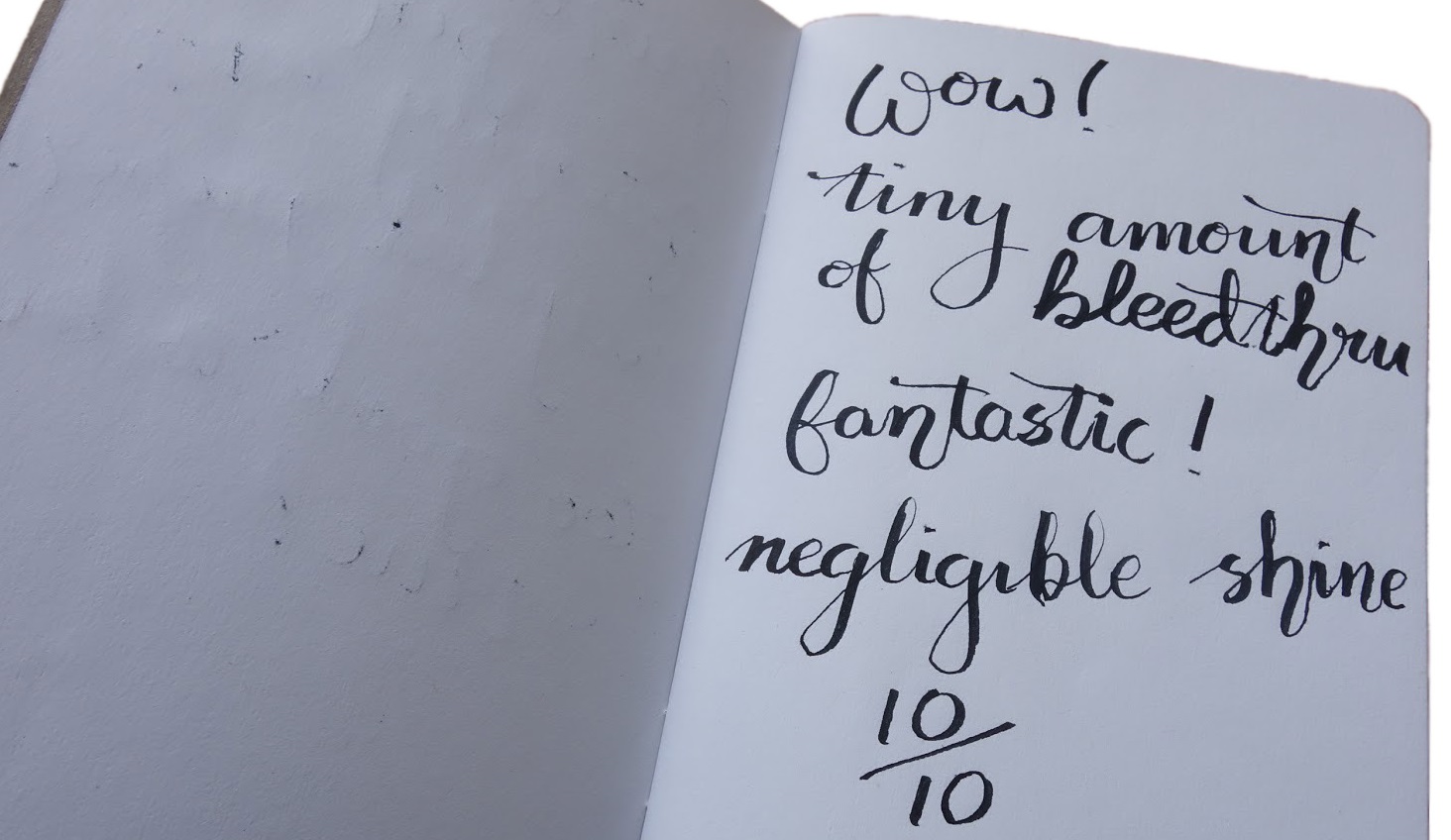 We’ve survived the Valentine’s Day web-promotion fandango! Phew – congratulations all ’round. Amidst all the rosy-hued retreads there was probably a decent fountain pen or two somewhere, but for a bit of variety we’ll just mention Lamy’s ‘Vibrant Pink’ ink. Another of their limited-edition offerings, it follows hard on the heels of the well-received but infuriatingly unobtainable Dark Lilac and the widely remaindered Petrol. So, good for obsessive pink fans, but the question remains; if there’s no chance of buying it again when you run out, why buy it once? Available at all the usual emporia while you ponder that conundrum.

If you want to make your inks work harder, you can do remarkable things with a squirt of bleach. If that sounds like the sort of thing best left to professionals, now you can get some professional training – for the Inkdom’s very own master of the art is running a workshop on the 17th of March! Click poster below for more details. 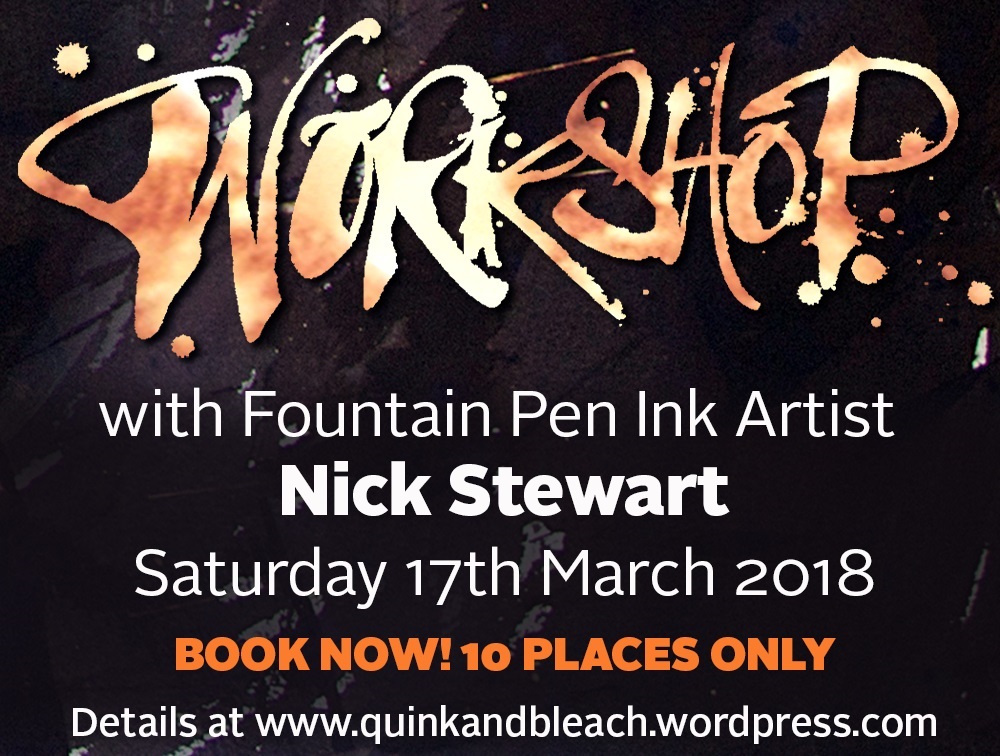 If you’re looking for something to put future ink purchases in, some of us are already rather excited about the forthcoming offering from Ensso. One of their exotic Piumas is doing the rounds of United Inkdom reviewers as we speak, but the ‘XS’ pocket pen in the works looks even more temptingly portable – and the Kickstarter price is more tempting still (link on the pic).

While the XS will be coming all the way from California, sadly there’s no sign yet of Robert Oster’s new pearlescent Shake’n’Shimmy inks making it here from Australia. Nevertheless, here are some depressingly sparkly images of what we can’t have. We’re never short of cheer! 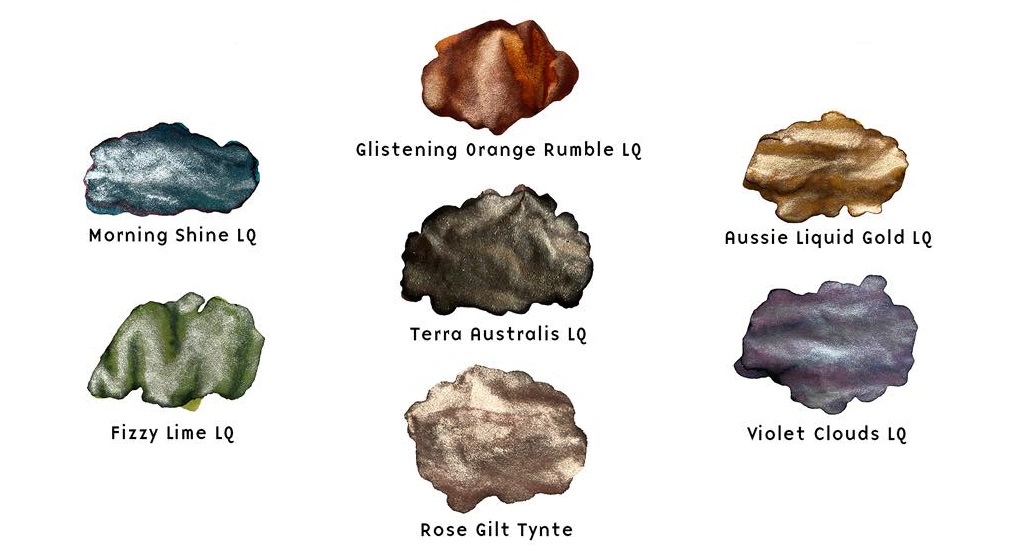 Finally, as increasingly customary here’s something you won’t want. Yes, it looks colourful, thanks to using the same technique as Kaweco’s famous ‘fireblue’ pens. Yes, it’s named after a very naughty drink which is going to compete with even your finest inks for interestingness [not actually a word]. But no, Montegrappa, a steel nib is really not OK on a pen which costs over £300. What were they thinking?

A little bit of history: Kaweco has a long association with fountain pens. Originally established in the German town of Heidelberg in 1883 as a manufacturer of wooden dip pens, it first introduced a pen called the Perkeo back in the 1920s. The design has evolved since then, of course… 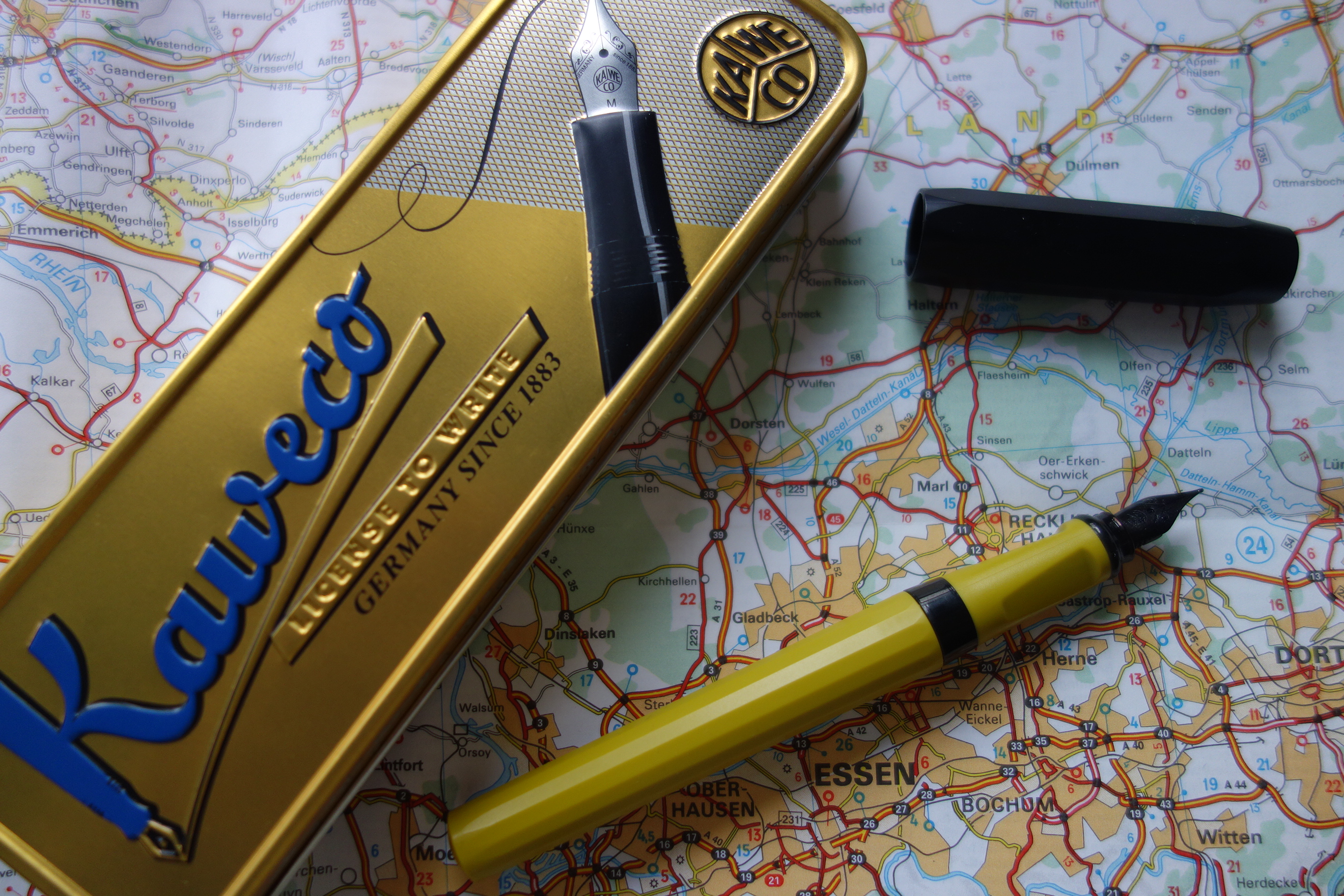 How it looks: While retaining the easily recognisable octagonal Kaweco shape in the cap, this pen is quite a departure from the look of their existing lines with some natty new bright colour combos, and is a goodly size rather than a pocket pen. It’s available with a Fine or Medium nib.

How it feels: It has a triangular grip, so if you like a Safari then you’ll like this grip too. It’s really light to hold, and perfectly suited for endless hours of essay-writing.

How it fills: The pen comes with three Kaweco cartridges and you can even stash a spare ink cartridge within the main body for emergency refills – or you can use a standard fountain pen converter filled with the ink of your choice.

Crucially, how it writes: The pen itself gives a little scratchy feedback but can also deliver some line variation with that Kaweco nib, but you do need to give it some pressure.

Pen! What is it good for?: Students, pupils, or anyone who just wants a lightweight, different-looking fun pen, really.

VFM: Sure, you can get less expensive pens from the far east, but this is a real German-made pen and you can have all that history and fountain pen experience for about £15. It represents very good value for a European pen.

If this isn’t quite your cup of tea … you could try a Lamy Nexx fountain pen, which is at a similar price point and comes in a wide variety of fun colours (although it will only accommodate proprietary cartridges and converters, so bear that in mind).

Where to get hold of one: Most good on-line fountain pen retailers stock the Perkeo; see Kaweco’s own site for a list of retailers.

Thanks to Kaweco for the samples that Alison and Scribble tested.

A little bit of history Karas Kustoms first dipped their toes into the world of pens via Kickstarter back in 2011. That pen was a machined aluminium affair that used the Hi-Tec-C refill. In the following years they branched out into different styles, including fountain pens, but nearly always using metal. The Decograph, therefore, is unusual in being a Karas Kustoms pen made from a different material: thermoplastic, no less. 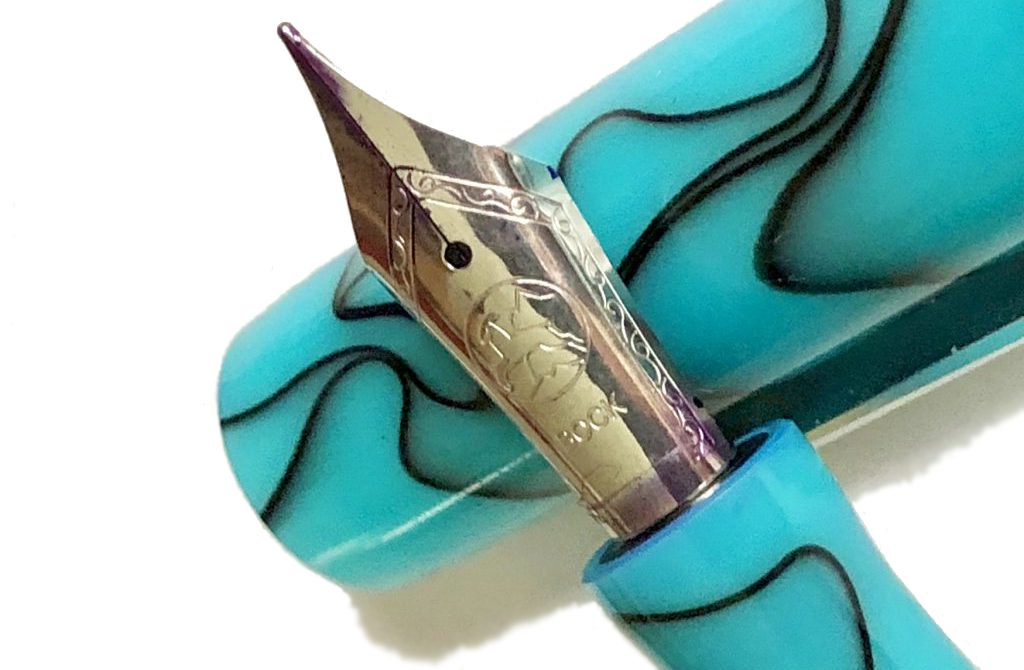 How it looks This particular model is called ‘Sleeping Beauty’, after a kind of turquoise found in Karas Kustoms’ home state of Arizona. The stone has a reputation for being very beautiful and Karas have done it justice, with a stunning cap and barrel of blue with black swirls. It’s complemented well with metal finials and clip. In short, it’s a stunner.

How it feels The Decograph is a light pen but doesn’t feel flimsy. Being so light, balance isn’t an issue whether posted or not. It’s a good length, too. It’s comfortable to hold. 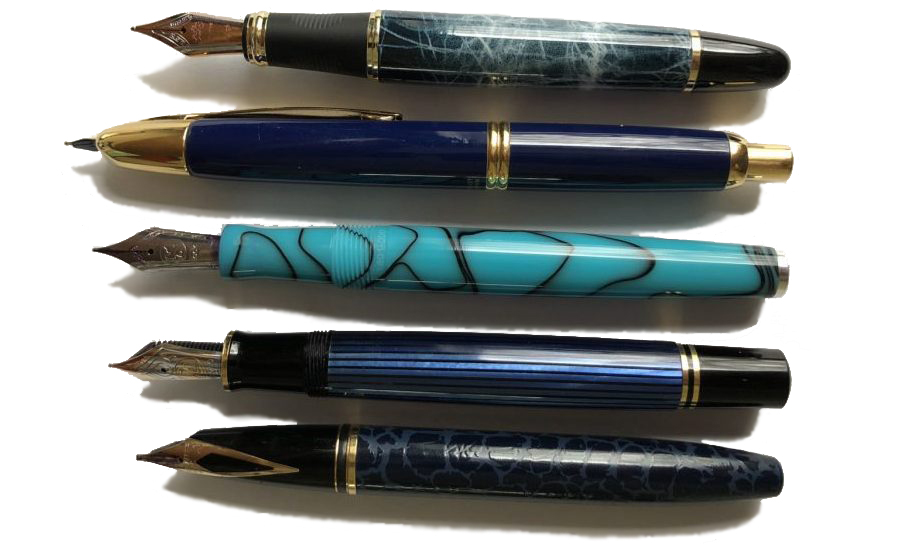 How it fills A standard international converter or cartridge.

Crucially, how it writes… The Decograph uses a stainless steel #6 Bock nib. The one in our pen was great. It was smooth and had excellent flow. It was a real pleasure to use. 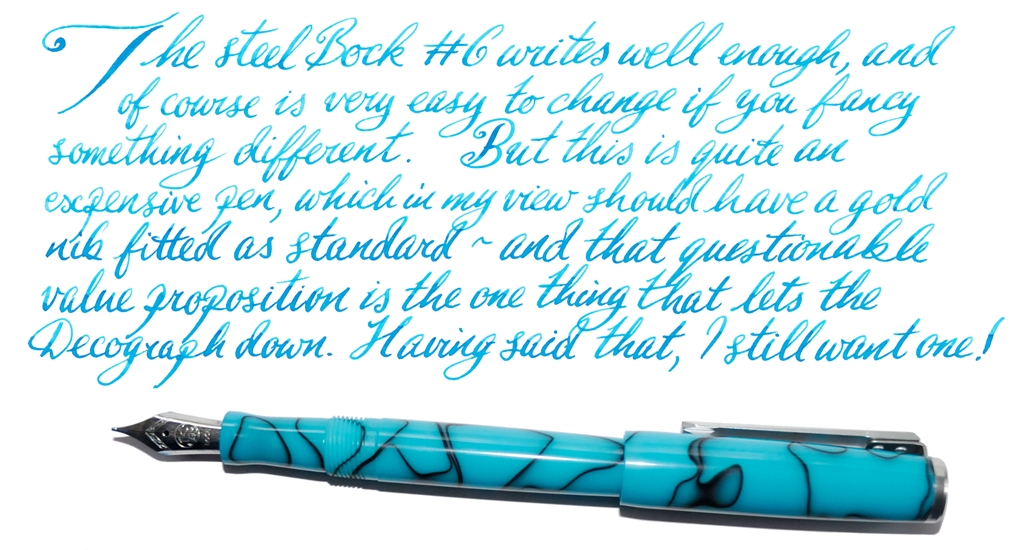 Pen! What is it good for? The Decograph is a pen that will make you want to pick it up and write. It’s perhaps a little too jolly for a staid business meeting but it will surely bring out the poet in you.

VFM At $165 this isn’t a cheap pen, particularly if buying from the UK, with exchange rates and shipping and the potential for import charges. There’s a case to be made for it having a gold nib at this price. However, it’s beautiful, writes well, is made by a company that really cares about what it does, and is a limited edition, too. 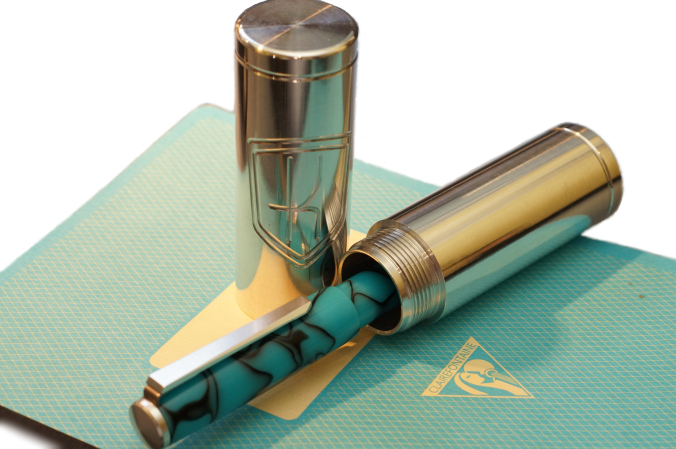 If this isn’t quite your cup of tea, but almost… If you’re in the UK then, once you’ve taken into account the cost of getting this pen into the country, you’re in the same price bracket as a custom made Twiss pen, with all the interesting barrel options available there. Alternatively, there are dozens of pens at this price or lower that use steel nibs and are made with lovely acrylics, as well as Platinum (in the UK) or Pilot (in the USA) that have gold nibs but (often) less inspiring designs.

Our overall recommendation Despite being made from plastic, this is a pen that still manages to be a Karas Kustoms pen. It’s expensive, especially this side of the pond, but it’s well made and lovely.

Where to get hold of one Direct from Karas Kustoms

Thanks to Karas Kustoms for sending us this pen to review. 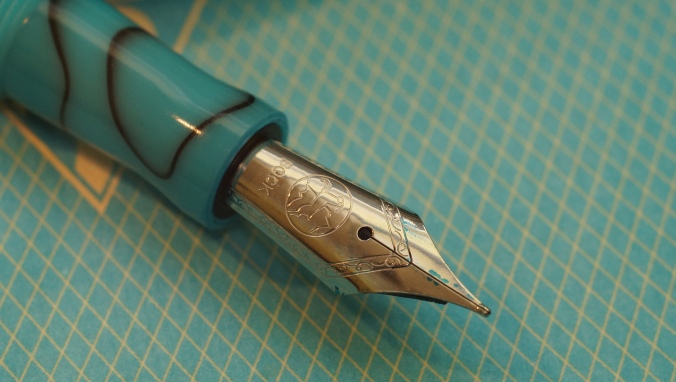 It’s been another busy week of ups and downs – but which is which, you have to choose for yourself!

First, let’s start with some unalloyed good news. The company formerly known as Pocket Notebooks still sells pocket notebooks but is now branded in honour of its honorary canine CEO, so a huge bark of approval please for Nero’s Notes! It’s hard not to feel that Nero’s designated biped feeding unit has been awfully clever.

Less cleverly, the Kickstarter of Doom has started to grind to a messy end with the trickled dispatch of the benighted Namisu Ixion. Some United Inkdom readers (and contributors) have it in their hands now, and early reports suggest that, in the end, a jolly decent fountain pen turned up. We’ll publish a meta-review here if we can. The customer service experience, sadly, has left some vocal disgruntlement in its wake.

Surprisingly, another retailer we know and love has been making moves this week, with Cult Pens announcing that it has been bought out by WHSmith. For international readers, WHSmith is a long-established general stationer, which used to be as ubiquitous as Woolworth on every high street and still sells newspapers and snacks at most railway stations and airports. It does stock a few basic fountain pens, but combining this broad offer with the USP of a specialist pen boutique is, well, an ‘interesting development’. The move’s raised a few eyebrows amongst enthusiasts, but fingers crossed that it works out.

Finally, we have been completely baffled this week by a Korean ink which costs three times as much as a good fountain pen. We have plenty of time for the retailers, who know their stuff and sell some cracking gear, but seriously – £45? Shiver me timbers! Colorverse is  offering an 80ml package for that handsome sum, with some of the sets featuring two different hues. This one is highly unlikely to end up on a United Inkdom meta-review, though, for the simple reason that none of us can afford it. Can you?