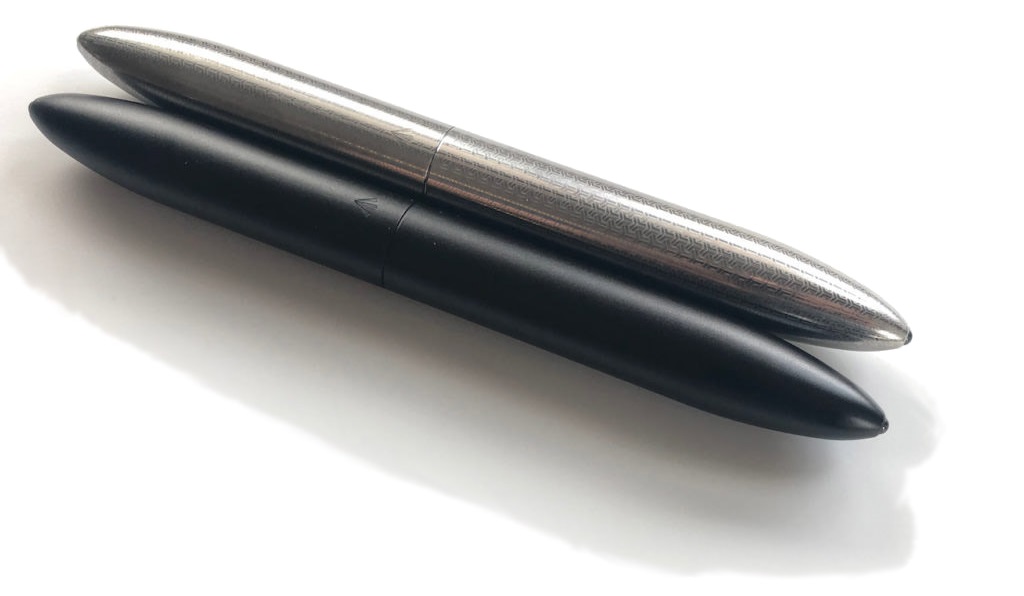 A little bit of history  Ireland doesn’t have much of a tradition of fountain pen making. That has all changed, changed utterly, as Ben Walsh’s Gravitas has brought a clutch of innovative metal-based designs to the market. They are typified by modern design, attention to detail, interesting material and eye-catching (and smelling) packaging.

Gravitas’ production base is in the port town of Drogheda, some 50 kilometres north of Dublin, in a region which is home to the 5,000-year-old Neolithic stone-age Newgrange (a UNESCO world heritage site). There’s also a strong Irish cultural dimension with the use of Ogham symbols on the packaging and heraldic escutcheon similar to the ermine of Breton coats of arms or the fleurs de lys from the family crest being branded on the pens and the packaging (although not on the bronze pen). Walsh, by the way, is a Norman family name from Breathnach, the Gaelic for Breton, foreigner or Welshman. The Normans invaded Ireland in the 12th century and fairly quickly became completely Hibernicised. As it happens, the logo is also rather reminiscent of the benchmarks left around these islands by the Ordnance Survey to ascertain how the ground rises or falls by, well, gravity. Choose the influence you prefer, but either way it looks good. 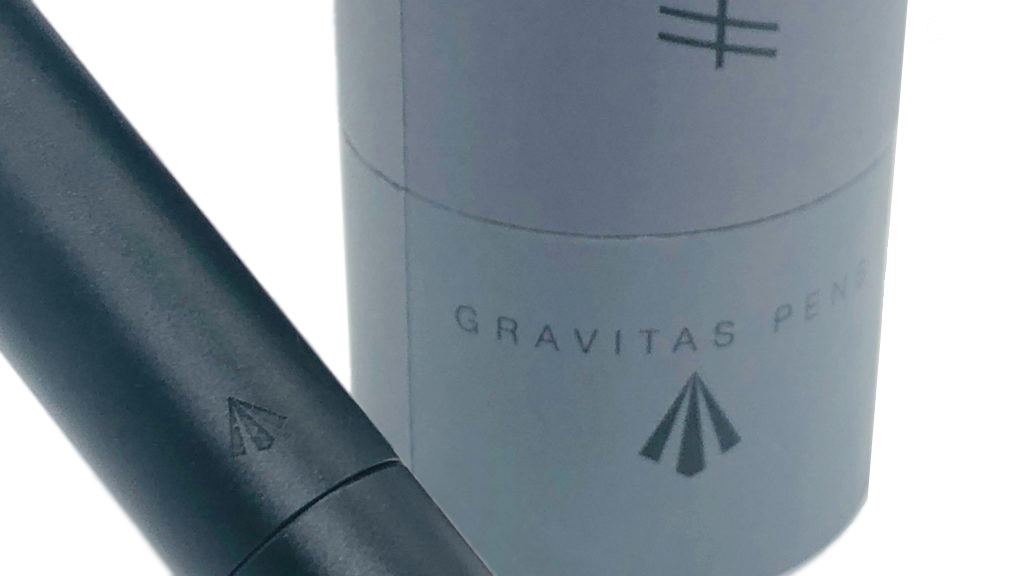 Ben Walsh had previously made pens in concrete before developing some prototype fountain pens as a Kick-starter project. It did not reach its initial target and he opted to execute the project himself. He asked many people in the pen community for their thoughts and feedback, and the results show him to be a good listener. In late 2020 Gravitas pens hit the market with a series of products in different materials and nib widths. Fountain Pen UK Facebook group members were offered a 10% discount and many took the plunge, including quite a few United Inkdom bloggers; a meta-review was inevitable.

How they look  These Gravitas fountain pens are cigar-shaped and made of metal (aluminium, steel and bronze) and come in a variety of finishes. Four models are considered here; a bronze, a stainless steel, a stunning eye-catching rainbow finished Skittles and a beautiful Celtic knotwork pen.

The Gravitas bronze model came well-packed inside a jiffy bag in a cardboard tube. The pen was wrapped in Gravitas-brand grey-black tissue paper and tightly plugged into the tube’s base, which keeps it safe in transit. The tissue paper comes powerfully perfumed, a touch which delights some and appals others, but attention from those now ubiquitous surface wipes removes the worst if that’s not to your taste. The exterior of the tube sports Ogham alphabetic runes translating to: Gravitas Pens and “May your blessings outnumber the shamrocks that grow and trouble avoid you wherever you go”.

The bronze material is a nickel-free Ampco 18 alloy of aluminium (10.5%), iron (3.5%), and the rest copper, and heat treated to provide a high strength, ductile and unusually tough metal typically used for aircraft parts (gears, bearings, etc). The finials are silicon nitride embedded in cap end and barrel end matching the toughness of the pen body. At 147.5mm long (capped), 15mm width and 97.15g capped (70g uncapped) this is a big, heavy pen, even compared to other metal-bodied fountain pens such as the Kaweco Supra (48g in stainless steel), aluminium-based Diplomat Aero (a substantial 41g), and four and a half times heavier than the ubiquitous Lamy Al-Star yardstick (a lightweight 21.7g).

At 74g capped (49g uncapped) the stainless-steel model is lighter than the bronze version but the design and dimensions are identical. The model we reviewed had a distinctive textured finish which extended to the section and which eliminated any of the typical slipperiness that many experience with metal sections. 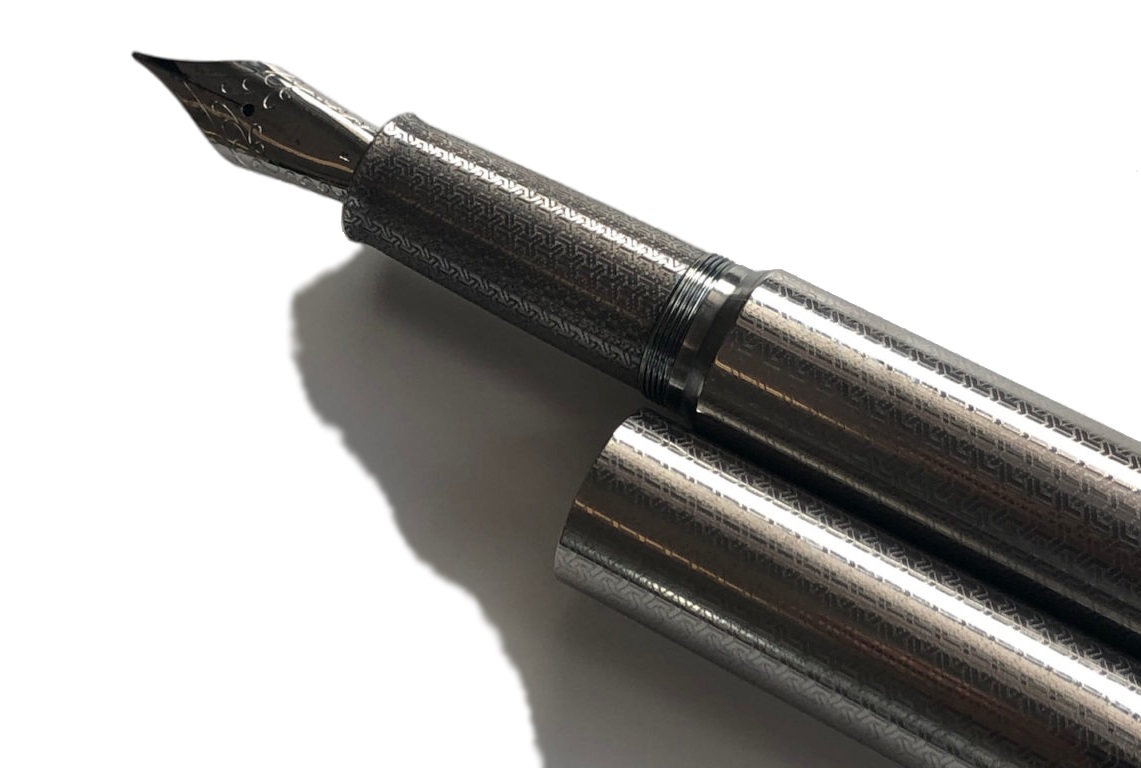 If Ben Walsh impresses as the serious mind behind Gravitas, you can see he has a sense of fun in his design of the Gravitas Skittles fountain pen. It is a stand-out ‘wow’ model which is quite hard to describe without sounding like a complete hippy. There is nothing subtle about it, be it the weight, the size, or the rainbow colours. If Jim Morrison were to grab a fountain pen, it would be this one, and he would quite probably stare into it for hours.

This psychedelia is reflected in the packaging, a very attractive tube, which gives you a sense of the colours of the pen even before you open it. Ben’s sense of fun carries through in the packaging because he infused it with a violet scent which persists for months after the pen is opened. The pen is made from 304 stainless steel with a precision machine finish, lightly brushed with a titanium nitride rainbow physical vapor deposition (PVD) coating, also known as thin-film coating. The attention to detail is seen in the continuation of the PVD coating inside the pen cap and body. This hefty pen is 74g capped and 49g uncapped but again feels comfortable in the hand. It is available in matt or polished finishes.

Ben Walsh’s father is a graphic designer and friend of Ireland’s foremost Celtic artist: Jim Fitzpatrick who is renowned for a series of Celtic mythology artworks and this prompted Ben to make a pen sporting Celtic knotwork decoration for his father. From these prototypes Gravitas offered the model to the fountain pen public. Celtic knotwork is famous in designs in Ireland and an echo of the traditions that monks scribed in the 8th century Book of Kells. In Celtic iconography the starting point is the square King Solomon (the reference of ‘Divine Inscrutability’ and wisdom) and foundation knots which are then extended to a plait structure of the Josephine knot. This is perfectly executed on the pen, showing as a silver laser-etched pattern on the anodised black aluminium or on 304 stainless steel precision machine finish and bead-blasted with a black PVD coating. Our reviewer with the steel version partnered the pen with a gold Jowo nib, a near perfect match of a stiff body with a more flexible and versatile nib.

How they feel  These are wonderfully tactile, beautiful and stylish pens that are a genuine pleasure to hold and use, not least because of the balance. All the models had the same triple-start square threads that meant the cap came off in one turn to reveal a generous some 30mm length section. The threads feel unobtrusive and comfy on the fingers. There is a 60-degree bevelled drop from the 15mm diameter body to 12mm of the section at the top, which then gently tapers down to 11.5mm at the bottom of the section. 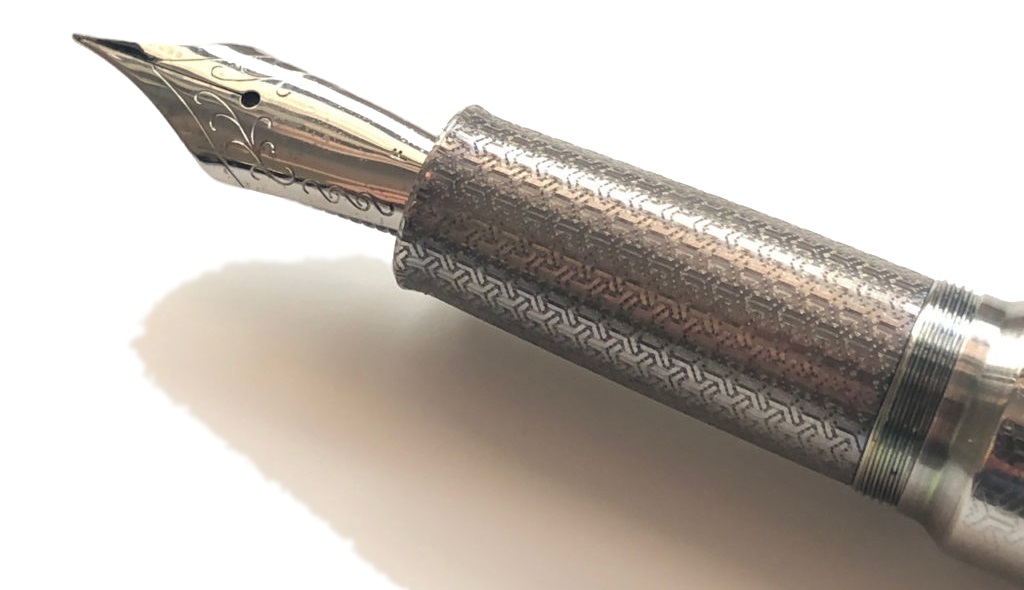 Universally the reviewers felt the pens were well-balanced; their heft snug and comfortable, with even the weightier models not too tiring for normal use. The bronze beast at 70.7g uncapped still felt ergonomic and stable in the hand. The bronze body has a very fine micro-texture to it that makes the surface easier to hold, while the stainless-steel model has a textured pattern which extends to the section which allows for a firm grip too. The steel-based Skittles model looks stunning in the hand and feels balanced and firm for writing. The weight is mainly in the barrel and thus is supported in the crook of your hand rather than by your fingers. Consequently, it doesn’t strain your finger joints in the same way that some heavier pens do. There’s no clip to get in the way, and this model doesn’t post either; it has been kept simple.

How they fill   Gravitas’ models are all cartridge/converter types, coming with a packet of small international cartridges in blue or black as well as the robust Schmidt K5 converter.

Crucially, how they write…  There was universal consensus on the comfort of the balance and feel of the different pens in the hand and how the #6 Jowo nibs performed. One reviewer wrote several long letters and others tested their pens at length with notes, letters and EDC tasks. One even attempted to copy some Uncial script and Celtic knot-work. With a variety of different steel nibs tested and one experimental gold nib fitted too, these pens all wrote faultlessly. 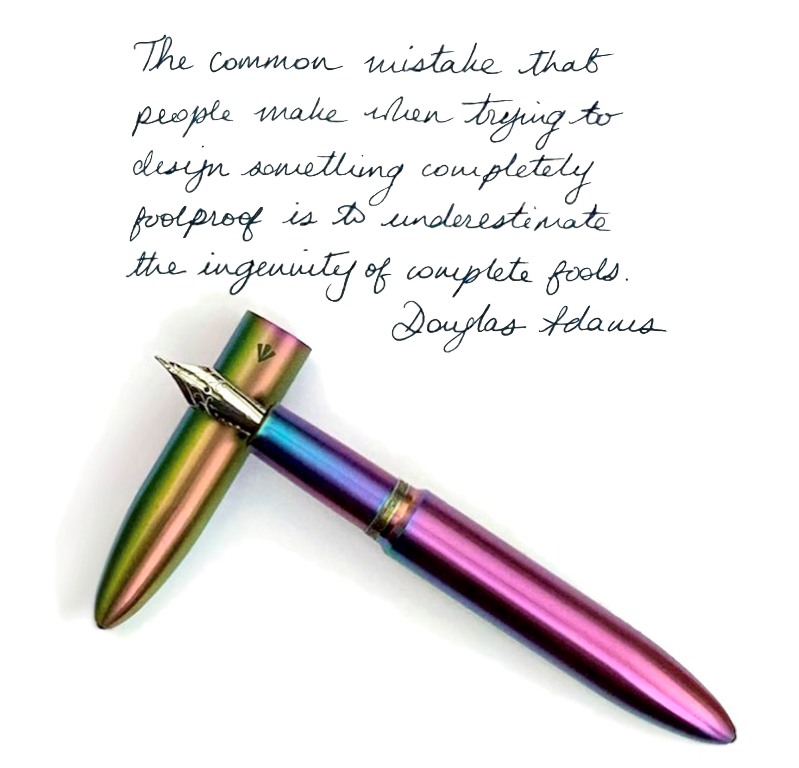 Pens! What are they good for?   These pens are a pleasure to use and the overall look and feel incite you to pick them up. For one reviewer, simply picking up the psychedelic Skittles model and turning it in the light was pleasure enough. They are versatile, easy to use, and the aesthetics of the different models makes this a ‘go to’ pen for many owners. 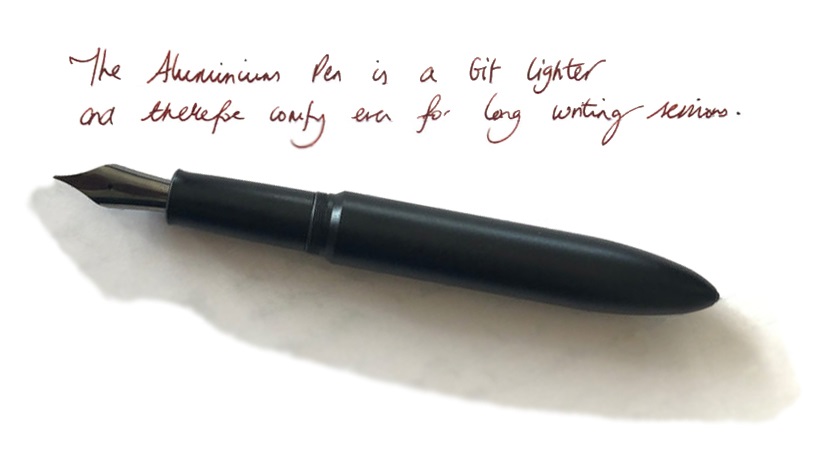 VFM   The Gravitas fountain pens are good value for money and compare favourably against other metal-bodied fountain pens. Depending on the finish and patterning the standard Gravitas pen ranges from €70 to €105 (£60-£90, or $85-$125). Postage to the UK is about €10-€15.

The only way is ethics  The pens are designed, prototyped, finished and packaged in Ireland by a micro-business (less than 10 employees). You can talk directly and easily with the owner Ben Walsh, which as many remarked makes the experience it all the more attractive. 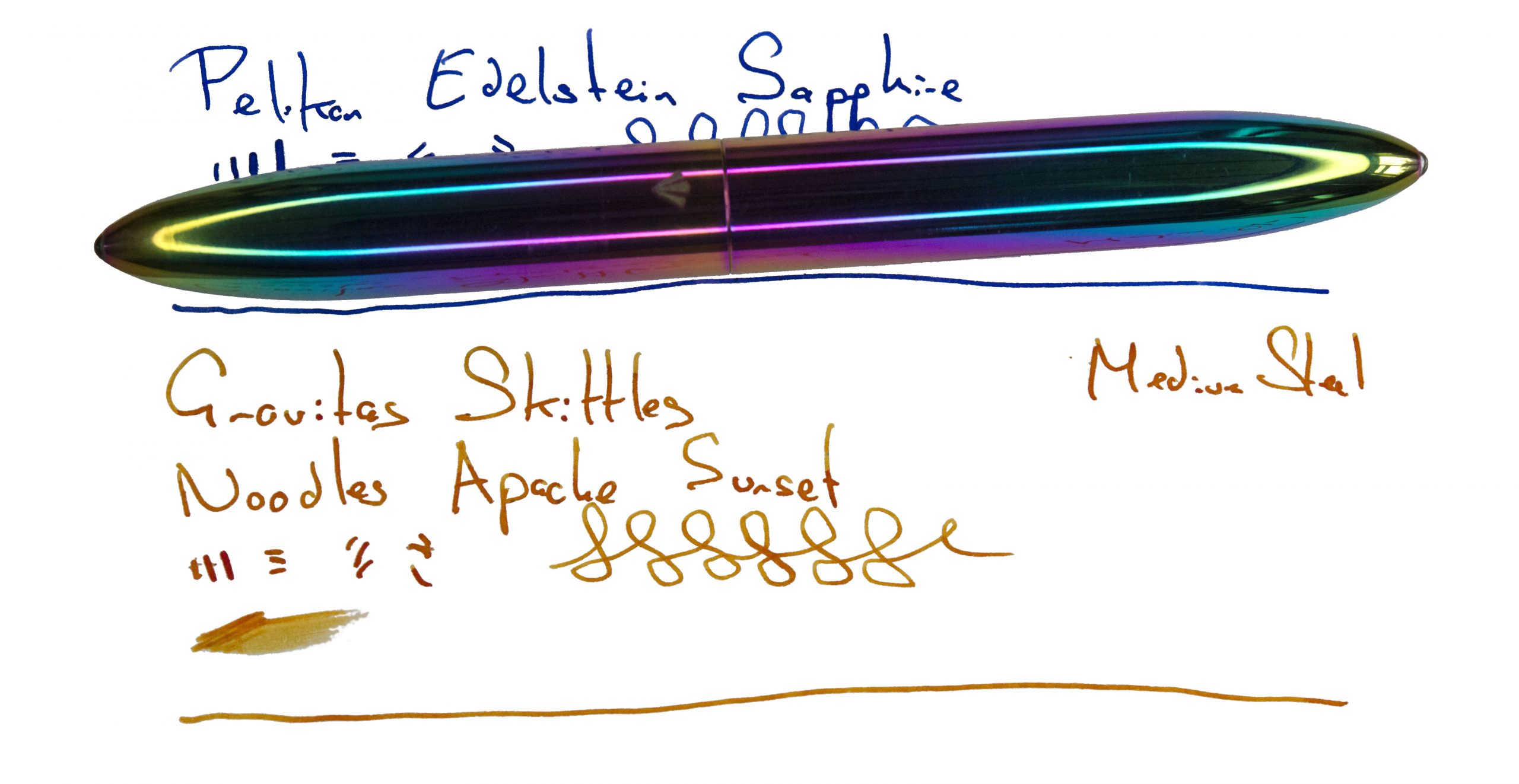 If this isn’t quite your cup of tea, but almost…  Metal pens often divide opinion, especially where they include metal sections whose lack of easy tactile connection can let the whole package slip. However, all reviewers noted how easy to use these pens felt. If the main Gravitas design is nevertheless a bit too big for your hands, the more recent ‘entry-level’ design may be more to your taste.

Our overall recommendation  Even reviewers with long-standing aversions to metal found Ben Walsh’s fountain pens striking a welcome chord. For a pen with such precise and determined design they represent great value for money. Buy one and watch the brand grow! 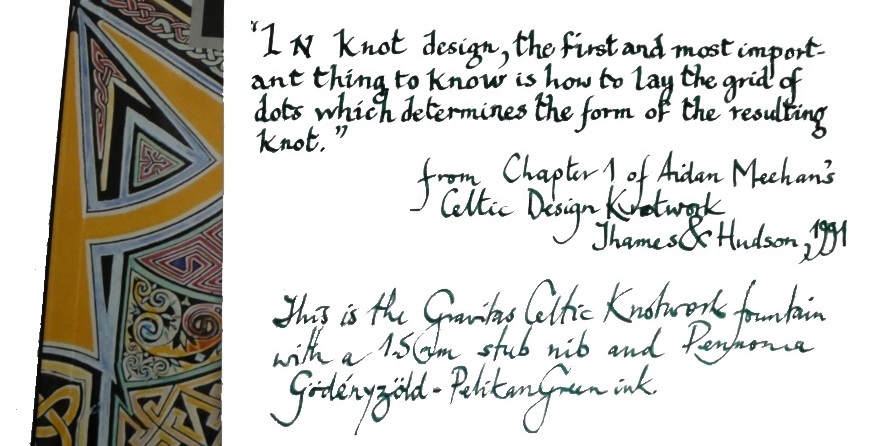 Where to get hold of one  Gravitas is purely an on-line operation, but our view is that you can buy with confidence. Bag yours at: www.gravitaspens.com 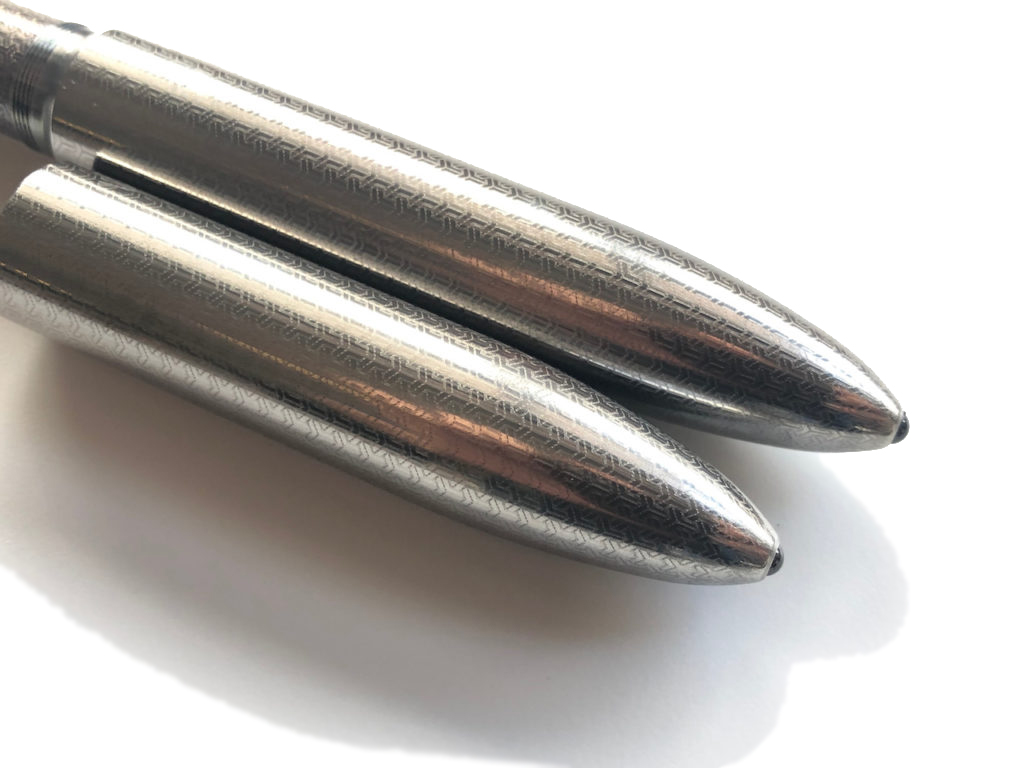