This week, we profile a brand new name in the fountain pen retail firmament – the exotically-monikered Izods, of exotic (OK, we’re stretching a point here) Ipswich.  Izods has come to many readers’ attention as a result of the growing interest in Robert Oster inks, which we’ll come on to below.  But we start by catching up with Roy, the founder of the company.

So, where does that curious name come from?  Well, I wanted a name which was short and snappy, and my grandfather had a yard in Birmingham called Izods – somehow it just seemed to fit!  I got into selling vintage pens the way many people do in this world; I like fixing things, and after preparing a few fountain pens for my own use found I had rather more on my hands than I’d planned, then one thing led to another.

You’re obviously fond of Montblanc, a brand which not everyone in the fountain pen world has kind words for – so what does it for you?  MB is a big conglomerate selling all sorts of things these days, and that’s perhaps not everyone’s cup of tea of course.  But many of the vintage pens were made of really good-quality materials which hold their value and usability for a long time, and even people who aren’t fountain pen fans say they have something of an ‘aura’ about them.  The trouble is, buying vintage Montblancs on the internet can be a fraught business, with some in variable condition and even counterfeits to trap the unwary.  That’s where I come in; I check everything properly, including the provenance, and carry out any cleaning, minor repairs etc. if needed so that I can be sure that anything I put on sale is in top-notch condition.  My favourites are the special editions like the Agatha Christie pen (pictured above), but they all seem to have their fans.

How did Australia’s Robert Oster inks come your way?  After selling pens for a while, ink seemed the logical next step – but I wanted to offer something a little different.  There was already quite a bit of interest in Robert’s range of inks on this side of the planet, and few outlets, so that seemed a niche which needed filling.  Robert was great to talk to and we got on immediately – he even found himself buying a couple of pens from me! We’ve just picked nine inks so far – there are plenty more colours where they came from – but they do seem to be selling like hot cakes already. 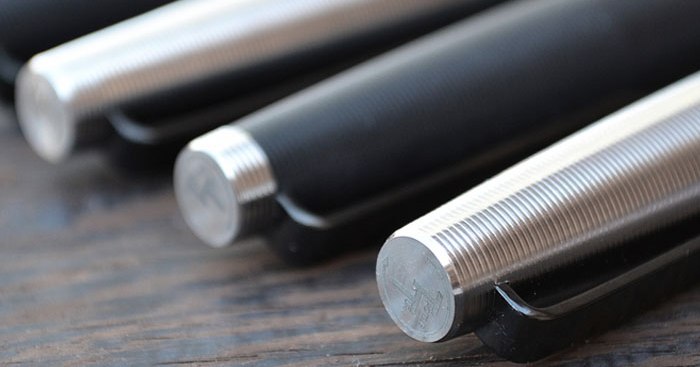 How did Tactile Turn join the collection?  Again, like Robert this was a personal connection as much as anything; Will from Tactile Turn is a real enthusiast who takes such a pride in being hands-on, and the Gist is a lovely pen – it looks and feels different, in a good way! We’re stocking most of the materials Will makes the Gist in at present and may well broaden out to a wider selection of nib options, and perhaps even some of Will’s other models, if demand is as strong as we expect it to be.

United Inkdom will be reviewing the Tactile Turn Gist and a selection of Robert Oster inks soon. Meanwhile, you can see all of Roy’s wares, including the Darkstar notebooks above, at the Izods website.