A modest gaggle of us hit the second day of the show this year, and found it quiet enough to make contact with a quite a few firms we’d like to work with in the months ahead – so here’s a quick summary.

Starting with well-known brands, Sheaffer / Cross have some pens which are more impressive in the hand than you might have expected, and we’re going to see if we can test some out soon. Similarly, Montegrappa’s nibs turn out to be better writers than we’d realised and we might be trying some of them too. Oh, and Lamy are astonished that we’ve not reviewed the Safari yet so we shall what happens…

Meanwhile, those Ystudio pens are still looking quite tempting, the new rose gold version of the aluminium Kaweco Sport is really rather impressive, and the limited edition colours of the Silvine Originals are quite classy too.

The Manuscript stand was a joy as ever, complete with Joyce’s ‘Artsynibs’ calligraphy tutorials and the interesting site of Bock nibs making an appearance in the Helit-bodies Clarity fountain pen (very similar to the Dex we have reviewed in the past). But more outrageous than any pen was their latest remarkable breakthrough – yes, they’ve only gone and invented the italic mechanical pencil! We’ll be putting that to the test as soon as we can get our hands on one.

Finally, we encountered some rather delectable paper too.  Ludlow Bookbinders had made some really cute leather-bound pocket notebooks – expect to see more of those – and another Italian paper-maker were launching their PuntoRiga brand in search of a UK distributor, which surely can’t be hard to find with such a good writing surface and some very interesting binding  ideas too. 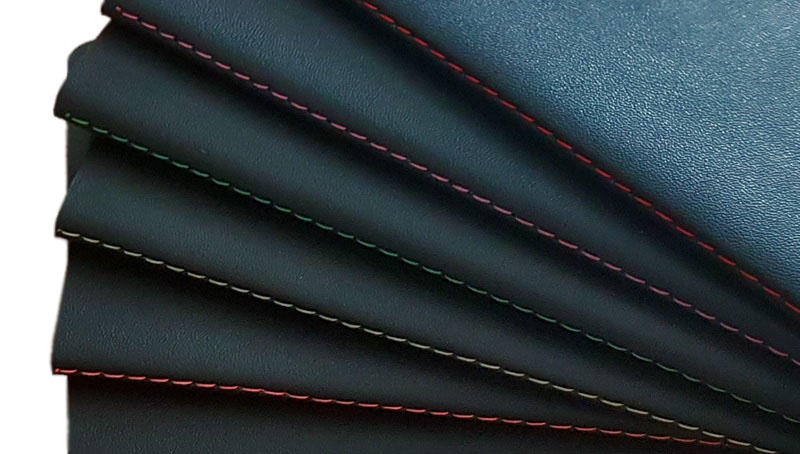 As ever, a good opportunity to meet some old friends and make some new ones!

Your dogged correspondent trekked down to the London Stationery Show for a second year, and as previously there was an embarrassment of riches.  Many of this year’s ‘finds’ are ones we’ll come back to, so here’s a quick report to whet your appetite. 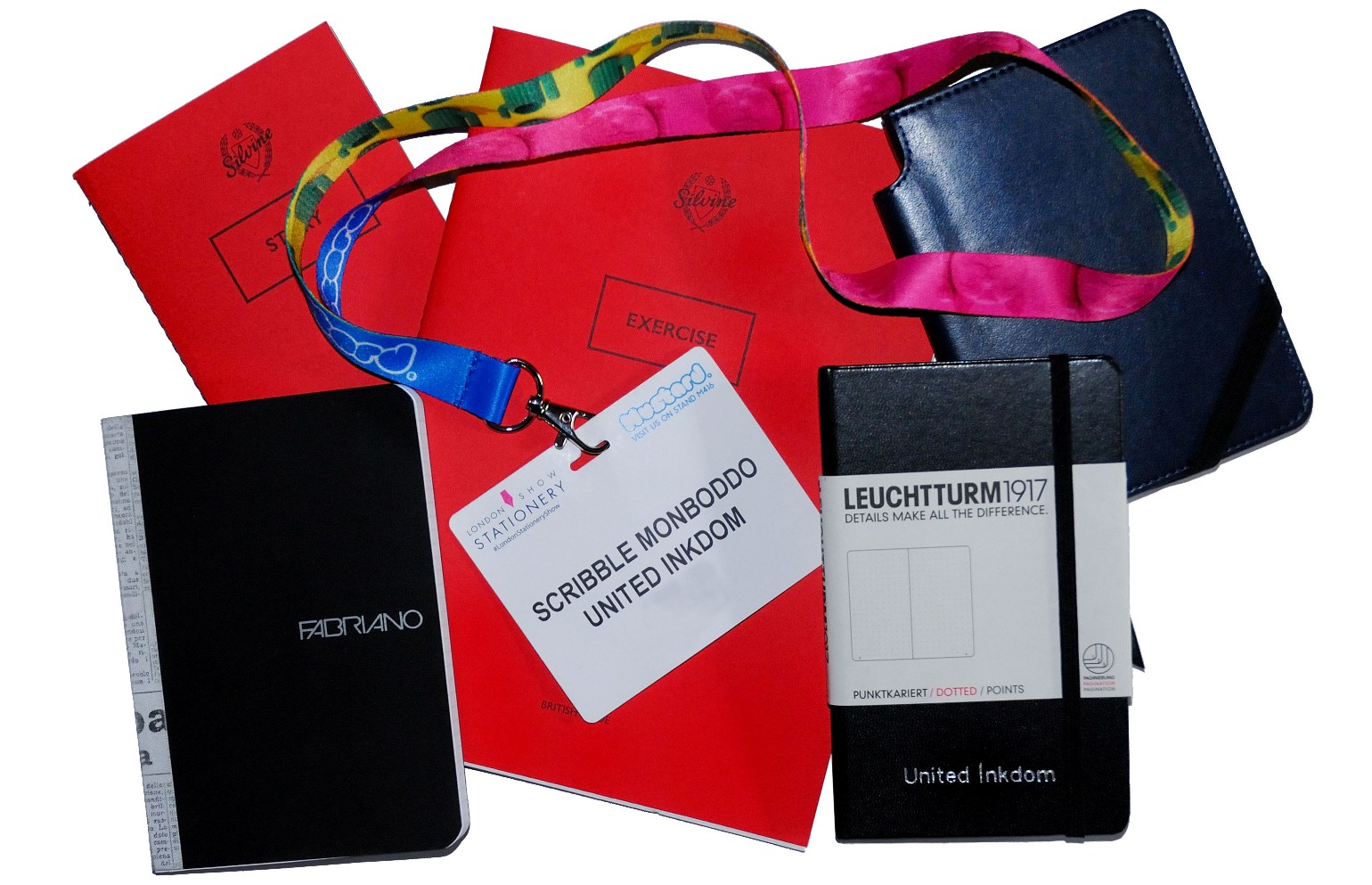 Leuchtturm kindly embossed our name in a silver on a unique United Inkdom A6 notebook, and with only one of them in the whole world we couldn’t possibly divide it between our team so we decide to hand it over to you!  We asked for comments with weird and wonderful ideas about what you’d do with such notebook in your pocket (or indeed in your hand), and the winning answer was, well, world domination.  How could we argue?

United Inkdom counts as a media channel these days (about which a modest degree of smugness is hopefully forgiveable), and that hallowed status gets us into trade fairs too, when we ask nicely.  So your dutiful correspondent popped up from the subterranean railway at the Angel, and sauntered in for a browse…

Now, this was a general stationery show rather than a nib-fest, as is reflected in the line-up of best-in show winners – none of which were fountain pens, horrifyingly.  But there were diamonds in the rough, nevertheless.  Stationery in the wider sense does matter to us pen-wielders, after all, and it was good to catch up with the team from Exaclair (i.e. Rhodia and Clairefontaine), who weren’t yet aware of the recent growth in fountain pen owners moving over to the disc-binder system and needing good A5 FP-friendly paper.  Well, they are now, and we look forward to seeing what develops.

Within the high-street emphasis were some other nice surprises, too.  Zebra, for instance, contributed a surprisingly nice extra-cheap fountain pen, disappointing only in the sense that it is disposable; it turns out to be good enough to want to keep.  Caran d’Ache, while not making much of their fountain pen range, sadly, at least had the kindness to give everyone one of their rather nice water-soluble colouring pencils.

Looking at what’s on the high street rather than the focus of specialist fountain pen retailers highlighted some different emphases, as you might expect.  Lamy presented rack after rack of endless Safaris, rolling on into the savannah until even the mildest-mannered visitor would reach for the elephant gun.  A certain brand who shall remain nameless invested in flying executives out from Japan rather than attending to their dubious UK pricing structure, but the least said about that the better. Then again, a high-quality German pen manufacturer you’ve never heard of was around the next corner – largely unknown in fountain pen circles because they sell mostly through jewellers rather than stationers at present – and of course, we’re going to see if we can help them with that profile in future. Also spotted was a potential new ink source, and a rather interesting fountain pen brand you have heard of who we’d love to review too – but those will have to stay unidentified for a little longer while we parley with them!

Pen people are lovely, as you know, and one of the highlights of the day was talking to some of them in person.  Louise from The Pen Shop, aka the ‘Queen of Dex’, handed over some interesting material for a United Inkdom meta-review coming up very soon indeed. Tony from Pocket Notebooks was a mine of information (as you get a flavour of in Ian’s interview with him a few weeks ago) and we’ve passed-on a few ideas in return – plus he donated some Tomoe River paper which we have all sorts of ideas for!

Getting back to the exhibitors for a moment, there was one outstanding triumph, and that of course was the historic yet bang-up-to-date Federhalter-Fabrik Kock, Weber & Co – OK, that’s Kaweco to you and me.  While they massively flattered a certain scribbler’s ego by confirming that this was the very first Supra sold, they also had the coolest hands-on exhibit in the whole place: the build-your-own-Sport assembly line!  Putting the components together and operating the machinery under the watchful eye of Sebastian Gutberlet himself (son of the CEO, so no pressure there) was far more convincing than any glossy sales brochure can be, and the results aren’t bad either.

We offered readers the chance to win this hand-made unique creation – plus a selection of purple cartridges, of course – by dropping us a line below telling us what sport you think this Sport is most fitted to accompany.  The results make for quite entertaining reading, starting with Quidditch and getting more creative from there on!