A little bit of history  The disc-binding concept has been around for so long that the copyright lapsed long ago, as we covered in our previous article about the system.  But, despite the binder design being out there for all to use for quite a while, until recently there were few really smart-looking notebooks which employed it.  Then we discovered that a new brand had been born, right in the heart of little Britain – and in a trice, our band of hardened critics had all bought one!  So, what makes this disc-binder so thoroughly irresistible?

How it looks  Well, how it looks is certainly part of the magic, coming as it does in a very tasteful array of colours. The outer leather is tough enough to knock about in most bags and come up looking handsome, whereas the inner suede-style leather can be selected in a range of rather groovier shades like purple and turquoise. It looks seriously classy.  For a little extra, you can also specify the colour of threads and get a monogram embossed onto the front as well.

How it feels  It feels pretty classy too. The outer leather is nicely tactile, and the inners are hard to resist stroking. The pages turn easily, and of course they pop in and out quite easily when you need to re-arrange them, too. Writing in one of these feels rather luxurious, which may sound an odd thing to claim from the humble act of putting nib to paper – but everyone who has tried finds themselves reporting the same experience. It also feels pretty good pitching up to a meeting knowing that you have the coolest notebook in the room, honestly.

How it fills  Now this is where life can get quite interesting for those who wish to have something very custom-made. The first thing that has to be mentioned is the impressive refill service available from William Hannah directly; the brand’s own paper (recently upgraded) came out very favourably in our tests, and as well as coming pre-punched for the disc-binder (naturally enough), it can be printed with dots, lines or grids in an ink which complements or contrasts with the colour of your notebook. There are also rather neat subject dividers available from the manufacturer now, so it’s perfectly possible to keep the whole thing ‘in house’ and have it working very well indeed.

Come on now, that’s not the only way to fill it  Well, naturally enough we were also tempted to try out the alternatives, which anyone with a guillotine and a punch can do (the Atoma punch works perfectly but is shockingly overpriced, whereas the Arc punch just about works but is much more affordable).  Our testing panel came up with some surprising conclusions, as well as one or two entirely predictable ones!  For fountain pen obsessives, it’s perhaps no great shock that Clairefontaine Triomphe still rocks many scribbler’s worlds.  Slightly more surprisingly, competitor Atoma’s paper, while not notably fountain pen friendly, fares much better in tests with a pencil carried out by Matthias.  Rob introduced us to the splendidly-smooth British Advocate Xtreme, and the impressively multi-purpose German Gmund Tactile paper. Fabriano’s Italian offering seemed one of the most effective for dot-grid paper, while despite the impressive range of colours available, even apricot could not convince our contributing classical musician that Swiss Artoz1001 was quite the best thing since sliced bread when it comes to finding a surface which you can actually write on!  For anyone wanting a good wallow in the dizzying range of options (and pointers on a few to avoid), Rob has a very detailed blog post and Scribble has set up a complete new blog on the subject.

Crucially, how it works…  You open it up, slide a pen out of the optional pen-holder, and write!  Of course, the really handy thing is that you can re-arrange the pages to your heart’s content without the annoying clicking and grinding of ‘traditional’ ring binders.  When you have filled it up, you can decant your notes into one of the excellent archive packs which William Hannah has just started selling, featuring some of the largest aluminium discs available (they have holes in them, so technically they’re rings, but let’s go with standard nomenclature for now).  The whole system has clearly been properly thought-through and does just what it should do.

Book! What is it good for?  Plenty of owners take one to work, and in most professions that’s probably a great idea; it looks the part, and you can smuggle in some personal notes without embarrassment. But it’s also great for journal-writing or, as Ruth often demonstrates, reviewing fountain pens!

VFM  Value is a subjective thing with this as with all products, of course. £95 sounds like quite a lot of money – until you pick one of these up and see what you’re getting. This is a seriously high-quality product which will last for years and years, and apart from the Italian leather the whole thing comes from Britain; the metalwork is custom-made in Leicester, and the covers are sewn in Melton Mowbray.  Bear in mind the development and production costs, and it becomes more of a surprise that this is available for anything less than a three-figure sum. To put it in context, a rather prominent international stationery brand (yes, you know who) makes a boring black A5 leather organiser which retails for more than four times as much, and that doesn’t even feature the disc-binding system – so isn’t half as useful.  The William Hannah notebook is perhaps something of a luxury, but it’s one that really works for its living.

If this isn’t quite your cup of tea, but almost…  We respectfully invite you to reconsider! Seriously, this is lovely, it works brilliantly and there’s not much out there to compare with it.  Atoma and Arc both sell leather covers for their versions of the disc-binding system, and in the US Discbound Marketplace offer custom-made binders using Arc-style plastic discs, although it’s probably fair to say that many of these would struggle to compete with William Hannah’s form and function.  If you like the look of the notebook but would just like it in different size, there may be hope on the horizon; an A6 version is in the pipeline (probably as a custom offer initially) and there may even be an A4 version to follow one day.

Our overall recommendation  You have probably guessed by now; we recommend saving up for one of these and treating yourself, if you can.

Where to get hold of one  This is only sold ‘direct’, and the customer service is so good that we really don’t think that’s a bad thing.  You can catch the maker himself at numerous pen shows, or just head straight to the user-friendly website. Be prepared to be tempted if you do. By the way, if you do give in to that temptation any time in the next couple of months, mention United Inkdom in the comments/requests box and you’ll get an extra pack of paper included in the deal. 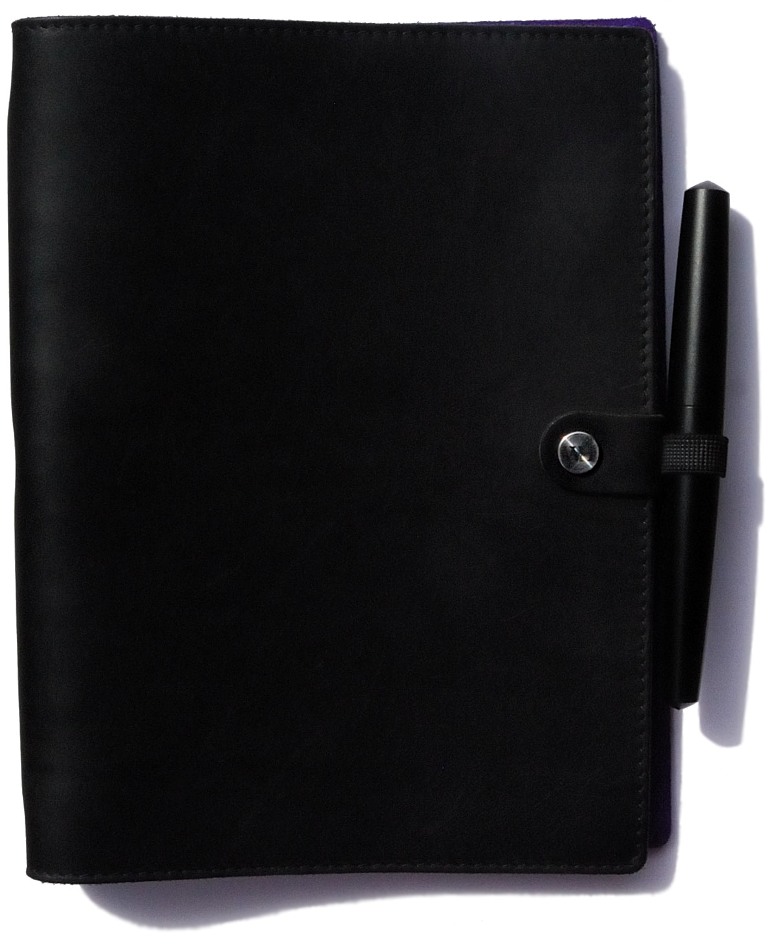 As well as the hyperlinks above (thanks to ‘James’ and Matthias for you contributions too), this meta-review references: 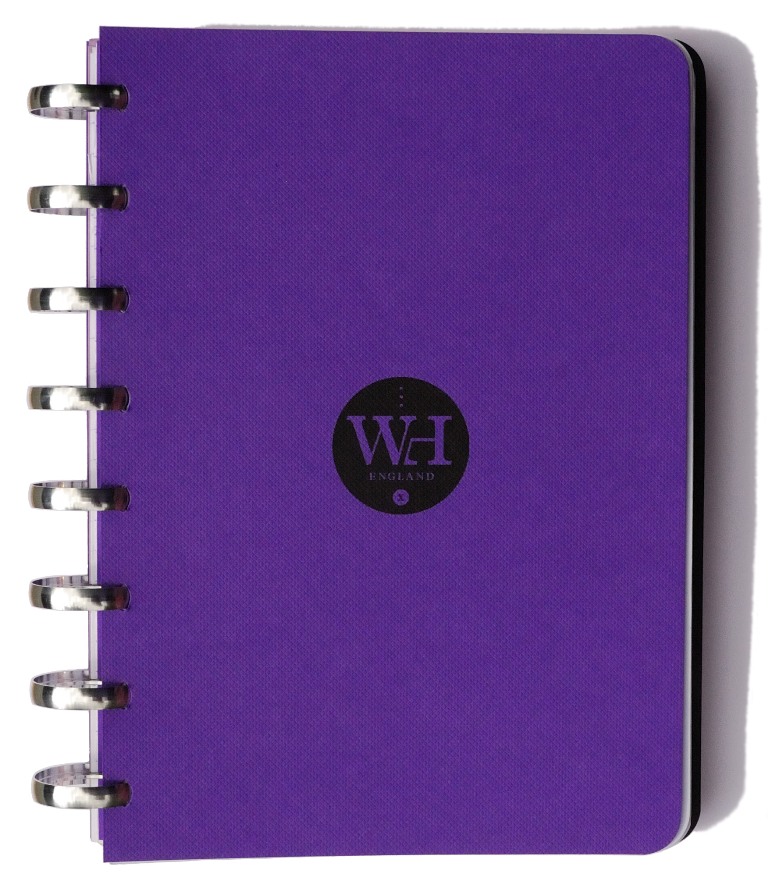 Thanks to  William Hannah for helping some of us reviewers get hold of the notebook (and various add-ons) early for reviewing purposes.