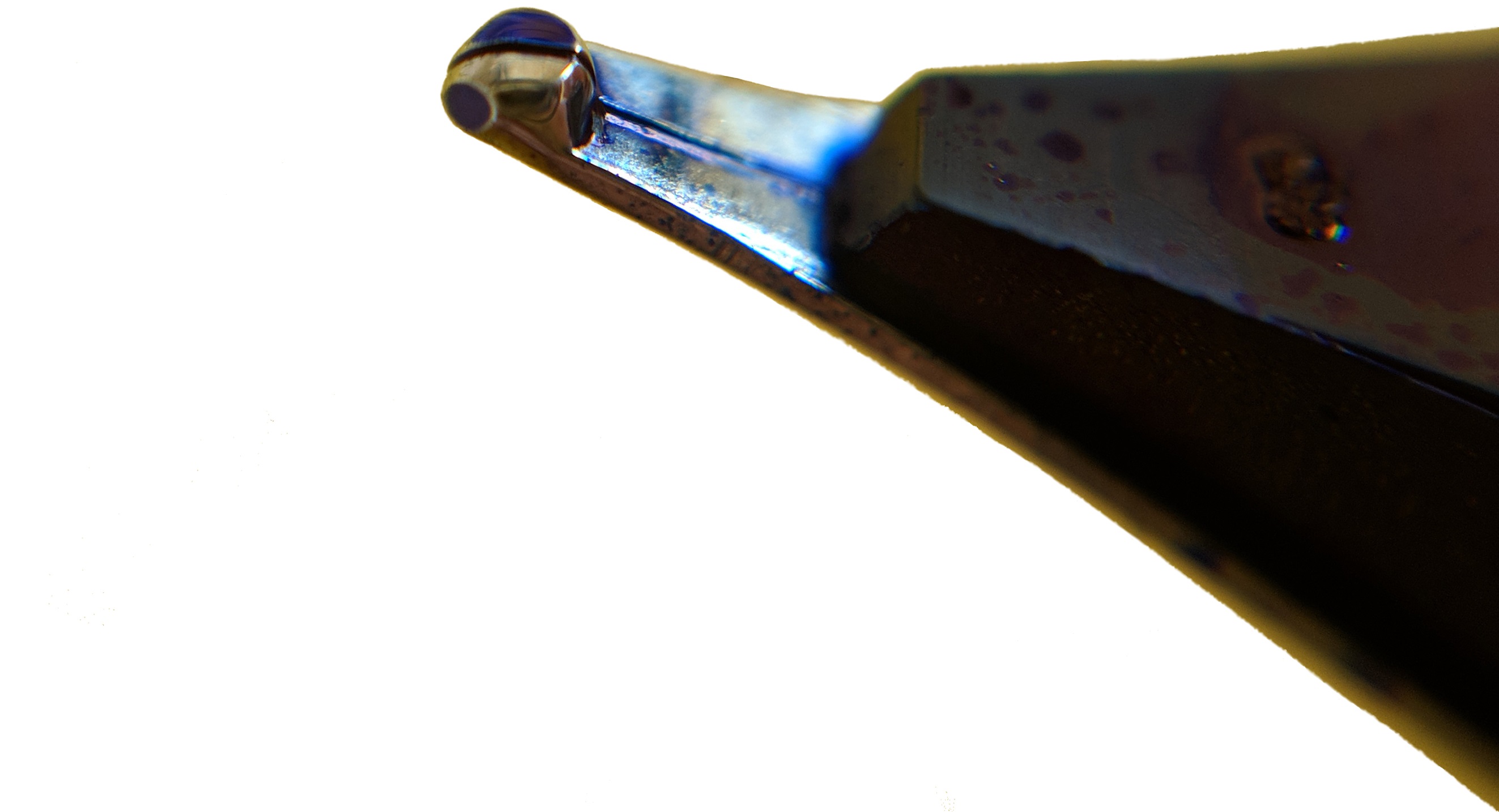 A little bit of history: Opus 88 is a newer brand to have found its way into our pencil cases. While the likes of Pelikan have celebrated their 175th anniversary this year, Opus 88 is still on its way to reach its 50th birthday. Hailing from Taiwan, the brand has made its mark with a pen that has become quite popular and sought after, particularly within the internet pen community.

How it looks: There are a number of different flavours to choose from with this pen. There’s blueberry; a slightly greyer blueberry, orange and strawbe.. I mean, blue, bluish-grey, orange and red as well as an oversize clear demonstrator version (available at a slight premium). Besides the clear demo’, all the pens follow the same design scheme which is a rather vibrant acrylic main body with ebonite accents in a slightly duller (though certainly not to say this is a bad thing, as it compliments the pen very well) colour of the acrylic.

How it feels: The pen is on the larger side, and of course the ‘oversize’ version will be even larger still. It sits nicely in the hand, however, and is nicely balanced. The cap screws off but there are no sharp threads and the section is quite long anyway, so it’s not uncomfortable to hold. The acrylic is very smooth and even when it’s capped it’s quite nice to run your fingers over the ebonite.

How it fills: Not something that’s often found in the majority of modern pens, but the Opus is an eyedropper pen. This is a rather easy system to use (though its convenience may be debated), as you just fill an eyedropper (or syringe) with your ink, expel it into the barrel of the pen and you are able to use the entire barrel-full (if you so desire) giving a fuller fill than if you were to have a piston system, for example. Slightly confusingly, there is what looks like a plunger arm within the body of the pen, but this is actually used as a shut-off valve like those found in pens such as the TWSBI Vac 700 and the Pilot Custom 823, as eyedroppers are prone to “burping” out ink. A very useful system!

The pen arrives with an eyedropper pipette so all you need is to supply the ink from a bottle and you’re ‘good to go’.

Crucially, how it writes…  The nib is a steel JoWo – typically very reliable.

Pen! What is it good for?  If you need a large ink capacity and something fun to show off, this is a great pen to consider. Though, while precautions have been taken to prevent any leakage, it may still be prone to typical eyedropper problems and so therefore care should be taken when carrying this around.

VFM  This pen comes in at $93 for the regular ‘normal size’ models and $120 for the ‘oversize’ demonstrator – that’s upper £60 and lower £80 respectively. That doesn’t break the bank and you get a nice looking pen with an interesting filling system that also feels great. While the occasional dryness was experienced with the nib of the test unit, this is usually fairly simple to fix (of course, at one’s own risk) and the pen writes reliably, bar the flow.

If this isn’t quite your cup of tea, but almost…  Many early vintage pens were eyedropper -filled – Mabie Todd, for example, made several. Other pens can sometimes be converted into an eyedropper though this requires a bit of work and maintenance on the user’s end. If you’re interested in converting a pen into an eyedropper, make sure you know how to do it properly and research whether or not the materials of the pen mean you can (metal parts, for example, are a no-no) – as well as ensuring the pen is actually convertible (such as there being no holes in the barrel, such as with a Lamy, or that it’s not all one piece). Some piston-filler pens can be used as an eyedropper as well, but some of the barrel is taken up by the piston mechanism. A TWSBI may also be considered which would run to about the same cost, if not cheaper (certainly when considering buying from within the UK as you’re not going to pay as high a shipping cost or potential customs). Or if you fancy just this pen but with a gold nib, a screw-in JoWo #5 is available as an after-market upgrade.

Our overall recommendation: A pretty decent pen from a company relatively new on the scene. There’s a lot of potential with these pens, and some interesting colour choices that should appeal to most people.

Where to get hold of one: These are available at Pen Chalet, where you will find both the regular Koloro and the oversized demonstrator model.

This week, our roving eye takes a little way out of the world of quaint market towns with nice pen shops in the corner and all the way to… Arizona. If that seems a bit of a leap, it will soon make sense.  We caught up with founder Ron Manwaring, ably assisted by marketing supremo Zach Jolley.

So Ron, how did you end up opening a pen shop in a chalet in Mesa?

Well, I actually moved here at first to work in software! Then I got interested in the potential of online retailing, and while I searched for an underserved niche a lot of my friends started telling me that I should take a look at fountain pens. It’s been quite a learning curve since then – but now I can see what fuss is about.

There isn’t really a chalet, though?

Sorry to disappoint you! It’s more of a warehouse, although a warehouse with some pretty cool stuff in it, it’s got to be said.

You said it was quite a learning curve. What drew you in?

Well, the pen community is very well-connected – everyone knows everyone, and everyone seems to have an opinion. That keeps us honest; you have to treat people with respect and customers really know what they’re doing! It’s great dealing with people who are so enthusiastic, and it’s nice to hear good things in return. We try to go the extra mile when we can and that seems to be appreciated.

So this probably isn’t going to be the first time you’ve talked to pen bloggers.

Oh no, we talk to bloggers all the time! We get to see a lot of the US bloggers at pen shows and the like, and we’ve already worked with a couple of United Inkdom members (Ian and Stuart) so you were never going to escape.

So let us in the secret – what sells?

It’s not such a big secret. Everyone loves big exciting gold nibs, right? But the other thing that really gets people interested is interesting design, and there are a couple of unusual brands which are doing that for us. One is Opus 88, who are doing a great job of reinventing the eye-dropper, and the other brand which leaps to mind is Taccia, who are the only company we can think who get to re-badge Sailor nibs. Actually, we’re going to see if we can United Inkdom to try both of those out.

So, here’s the killer question; what are you both writing with today?

Ron: I love the Pilot Custom 823, which is a serious fountain pen, but a Retro 51 roller can be useful too – I hope the nib fans will forgive me!

Zach: I’ve taken to an Opus88 – that smooth nib takes some beating!

OK, you’ve sold it to us! We’ll have to put those pens through the review mill…