Once upon a time, Birmingham was the engineering design capital of the world.  Products imagined by nineteenth-century draughtsmen in Brum can still be seen all over the planet, from tea-packing machines in the Azores to boats on Lake Titicaca.  With the gradual demise of heavy engineering, you’d be forgiven for thinking it’s all in the past, but a part of that heritage lives on in the city’s Jewellery Quarter, which has been making pens and pencils since the days when they kept the bureaucracy of the British Empire running. There dip-pen enthusiasts can visit the pen museum and try for themselves the hand-pulled stamps that made steel nibs by the thousands to ship all over the world – and just up the road, there’s something even more fascinating going on…

Victorian and Edwardian machine-tooling was evidently built to last, and Yard-o-Led are still using it to impressive effect.  The name comes, of course from the pre-metric measuring system that all the machinery and designs still employ; each of their original propelling pencils still comes with twelve three-inch leads, which when lined up constitute a while imperial yard of lead.  It’s for that reason that the company responsible is now called Imperial Yard, reasonably enough!

There have been a few experiments with different alloys over the years, but these days each pen or pencil is made from scratch of silver.  ‘Scratch’ in this case means silver tubes, which head over to the Assay Office for those mystical hallmarks, and then return for a range of fascinating time-honoured processes.  Stretched and squeezed to form points, the resulting blanks are than patterned either by hand, or by hand-powered machinery.  The hand-powered machinery  is the number-controlled mill which you can see two examples of in the background of the photograph below – they are not CNC because, of course, in the days these were built a computer was a human being with a slide-rule (and, quite probably, a pencil). 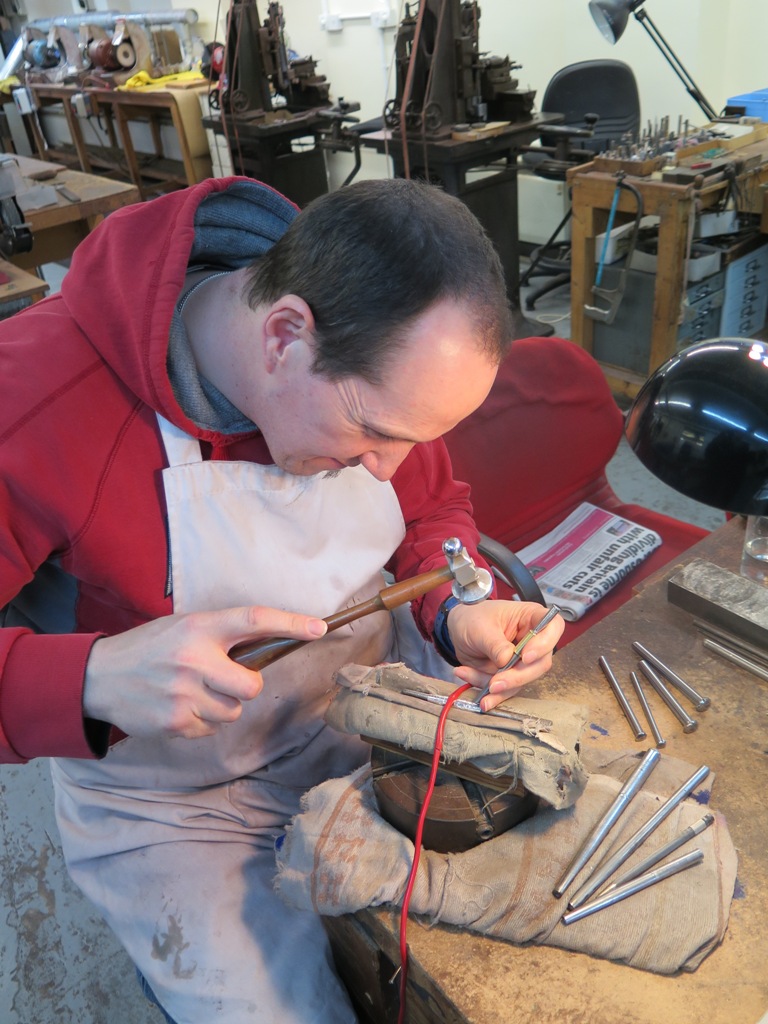 The number-control mill makes the lovely barley-corn patterns, whereas the distinctive comma-and-apostrophe patterns are hammered-out by hand.  One of two current experts, Alex, is doing just that in the picture above.  The red cable serves as a clamp, to hold the blank in place without marking the surface.  Other than that, and a soft cloth, the equipment consists of a range of vintage specialist chisels, a light hammer, and one very patient operator; each pen takes hours to complete.  The harmonious result of these ministrations is a remarkably organic-looking surface (in some lights, more vegetable than mineral), and each pen or pencil produced this way is inherently unique. Naturally, we’ll be reviewing examples of both processes in the next couple of articles.

Yard-o-Led as a brand, and as a team, has inevitably been through some ups and downs. The brand has recently been released from ownership by Filofax – another great British name, of course, but in retrospect perhaps not the most obvious combination (a Filofax you take to work and bash around, but you probably wouldn’t want to do that to an all-silver YoL). The workshop, too, has moved, but given the irreplaceable nature of many of the vintage tools and machines in use, that’s unlikely to happen again in a hurry.  These days, it’s a hive of activity which is a real treat to visit if you get the chance – a place where proper craftsmen still produce labours of love which also happen to work as tools themselves. When you see the fountain pen and propelling pencil the company has lent us to review over the next few weeks, we’re pretty sure you’ll fall in love too.

One thought on “Yard-o-Led profile”