To complete our series of articles about The Pen Shop and its wares, we really needed to foray into the world of Montblanc at least briefly.  This presented a bit of a challenge as, for various reasons, none of us have their pens and there was no way to borrow one either. But the canny folk at Pen Shop HQ found a Montblanc product that we could put through its paces and is perhaps of wider interest too – the MB ink range.  It’s a bigger range than many fountain European pen manufacturers promote, so the big set of cartridges (and one or two bottles) which turned up presented us all with a few challenges – and Ruth gets the prize for being the only one of us who has tested every single colour so far, as you can see on  the illustration below. 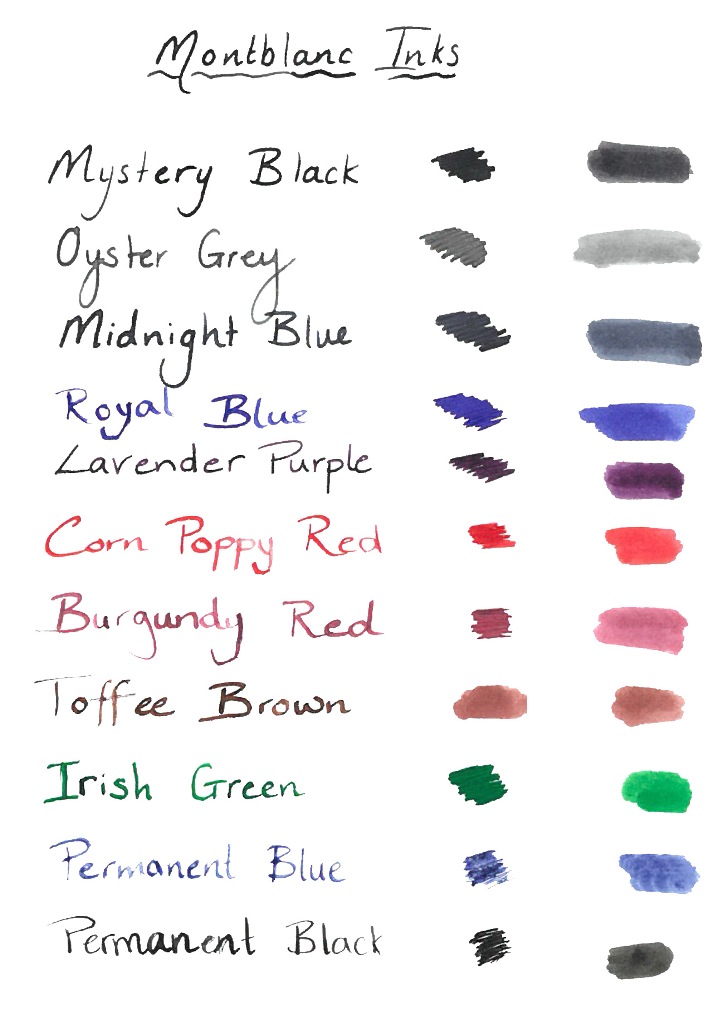 Trying to be all things to all people is a hard trick to pull off, and on balance our collective assessment was that Montblanc only partially succeeded – but with a few modest gems in the mix.  Perhaps the biggest achievement is to put out something under the Montblanc brand which is both good-quality and quite reasonably priced.  The black, like that famed ‘precious resin’ is consistent (if nothing to write home about), and only the grey seemed to be a real disappointment.  The standard blue divided opinion, but more because it reminded some of us of school days than the ink’s own properties – and to be fair, it’s safe in almost any pen you can find.

Three inks seemed to stand out as winning a fair share of approval.  Lavender Purple, firstly, isn’t the lightly pinkish-blue that most of us expect from an ink of that name, but is a rather pleasing dark purple which works well in fat nibs.  Scribble had a bottle already, which will surprise no-one – speaking of which, the bottle is quite impressively over-engineered and eye-catching, in a look-at-me-in-my-BMW sort of way.

Ian likes a bit of green, and this one went down rather well; not too bright to be usable, and not so dark as to be dingy, it’s a good balance.

While none of the inks have quite caused uproar and outrage of Lamy Dark Lilac proportions, the overall pick of the bunch for us was probably Corn-Poppy Red, which both Rob and Scribble find themselves using in ‘regular rotation’ pens now.  So there you are – there is a Montblanc product we can recommend.

For more on the range, see:

Thanks to Hannah and the team at The Pen Shop!