A little bit of history  Are you sitting comfortably? The history here is a quite a long one. When Padraig was kidnapped by pirates and taken to slavery in Ireland – prior to his subsequent visit which, in the long run, elevated him as Saint Patrick – some accounts record that his sister Lupita was carried away with him.  Her life story is obscure indeed, but somehow legends ascribed to or connected with her found their home at the edge of Lough Ennell.  What may have been an isolated area of the now-drained bog at the edge could conceivably been named in shaky Norman French as L’Isle de Lupita, but this too is conjecture; somehow, nevertheless, the name was corrupted to Lilliput.  Many centuries later the Dean of a cathedral – St.Patrick’s Cathedral, as it happens, for in our world all things are connected – was staying by the lake when he looked across and saw tiny figures, diminished by perspective, on the far side of the shore.  According to literary legend, there an idea was born; for that Dean was none other than Jonathan Swift. 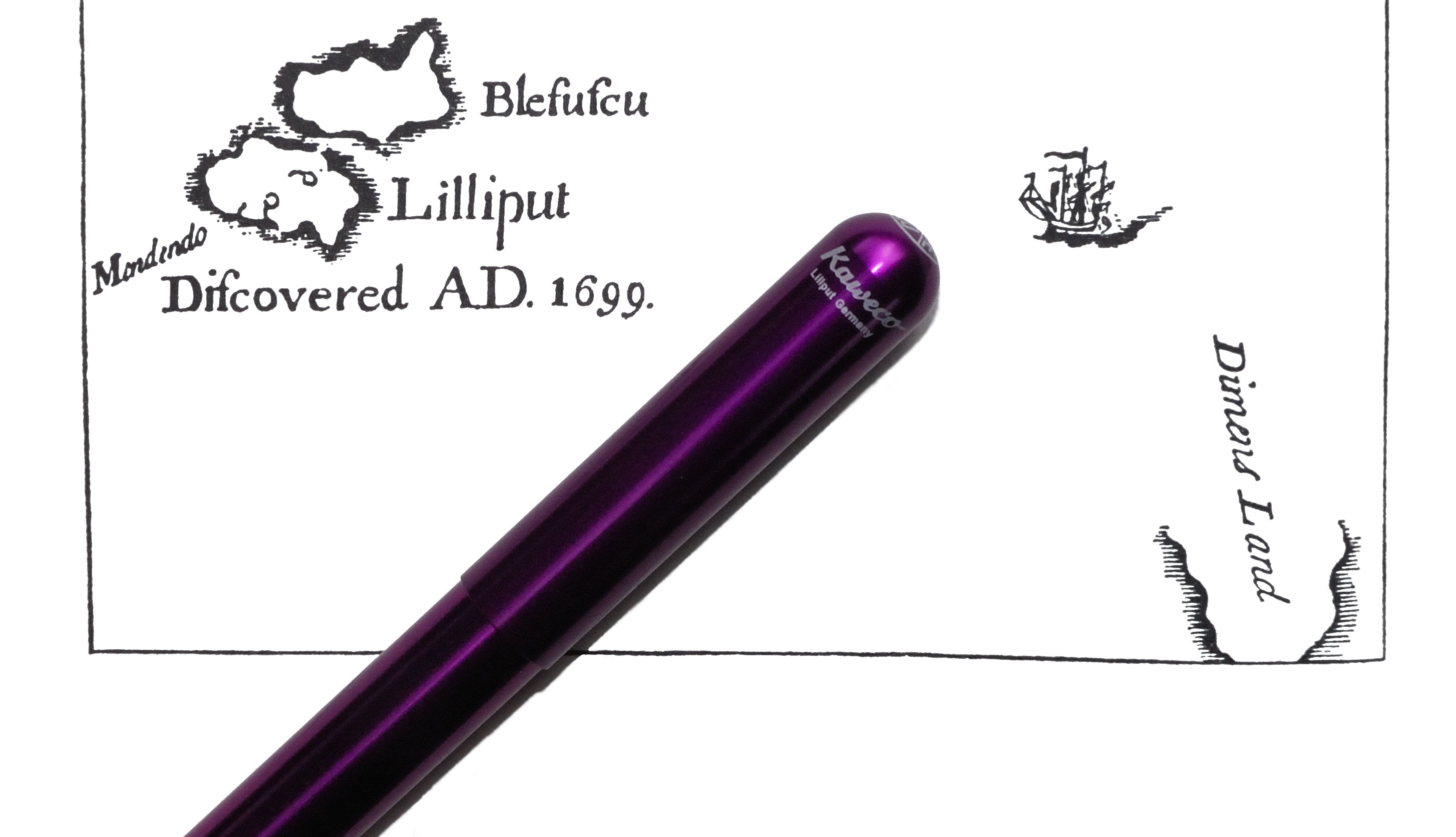 A little bit more history Jonathan Swift was a rapier-sharp satirist in his time (see ‘A Modest Proposal‘ for his critique of the way some governments behave towards the poor), but his best-known work these days is a rather subtler satire on tribal folly, Gulliver’s Travels.  Lemuel Gulliver’s first port of call, of course, is Lilliput, where the people are astonishingly diminutive – around six inches in height, typically.  If the fountain pen had been available at this point, a good century and a half before its invention, the proportionate writing implement for a true Lilliputian would have been about 1cm in length.  In setting out to make an exceptionally minuscule fountain pen it is greatly to the relief of all diligent scribes that Messrs Koch, Weber and Company of Nuremberg, late of Heidelberg, aspired to virtues beyond mere portability…

How it looks  Oh alright, it’s still tiny – just not quite as tiny as that! This simple metal tube (well, simple in most versions, at least) is the smallest serious fountain pen currently in production.  It looks small and, at least in basic black, inconspicuous.  Unscrew the cap, screw it onto the back to extend to the pen’s full length, and it looks a bit more like the pen concept we’re all familiar with.  Then different finishes separate the subtle from the unsubtle; the plain black aluminium gives way to flashy pink and purple versions, encounters with flame-throwers turn the stainless steel version into ‘fireblue’, and the rippled finish of the ‘brass wave’ turns a basic pipe into something which looks like it just fell out of a grandfather clock.  There’s a lot of visual variety for such a small pen.  Oddly, a typographical error misses the third ‘L’ in Lilliput from the barrel imprint, but Swift’s own spelling was so haphazard that he probably wouldn’t mind too much.

How it feels  Did we mention this thing is small?  It really feels it!  For most of our reviewers, the Lilliput is ideal for a light, unobtrusive pocket pen which does a good job of taking quick notes. One of our reviewers found it too small to do anything much with, while another actually wrote an entire examination paper with one.  This is certainly a size and shape which divides opinion quite sharply.

How it fills  There is room for a small international cartridge in the barrel, and that’s all. Kaweco’s new small converter does fit into the section, but with little free space in the barrel the piston cannot be safely pulled far enough to get more than about 0.1ml drawn up, so that’s unlikely to be helpful. Thankfully, a wide range of decent tints are available in cartridge form these days, including all ten of Kaweco’s own inks, and refilling an empty cartridge from a bottle with a syringe is fairly straightforward.

Crucially, how it writes…   As ever, that depends upon the nib you choose.  The Lilliput uses the same nib as most other small-ish Kaweco fountain pens including the Sport, Student, Special and Dia, and the whole nib, feed and collar assembly is a simple screw-fit so you can swap and change to your heart’s content.  The standard steel units are usually pretty good, and if the quality consistency is perhaps not quite as stellar as that achieved by Diplomat and Faber-Castell, the enthusiastic and friendly customer service more than makes up for it; no Kaweco pen owner is left for long without a pen they can use, in our experience. The gold-coloured nibs work similarly well, while the black-painted nibs tend to run a little drier but can be coaxed back into life by refilling with a very wet ink, such as KWZ.  If you really want to go crazy and spend more on a nib than you did on the pen, you can even fit one of the excellent gold nibs – and those are indeed not cheap, but Bock gold is very reliable.

Pen! What is it good for?  For most people, this is a trusty little  stand-by pen to write quick notes with. True eccentrics will write reams with the thing, but it’s a free world and we love the variety!

VFM  This depends upon the finish you go for, and how far it fits your writing style.  The brass wave and ‘fireblue’ versions do take considerable expertise and time to make, and are priced quite reasonably for what they are – but perhaps only represent good value if you are actually going to use them.  The more basic aluminium  versions are incontestably good value as robust but real pocket fountain pens.

If this isn’t quite your cup of tea, but almost…   Buy a bigger pen.  Seriously, there is very little of comparable size and quality in the current market. There are some tiny vintage pens, which you may find if you’re lucky, and some other cheap and rather less durable pocket pens from a few other manufacturers are still around, but if you want an ultra-small pocket fountain pen which will last the distance this is probably the best option.  If you like the minimalist shape of the Lilliput and just want it scaled-up for comfort in the hand, however, you might consider its larger sibling, the Brobdingnag*.

Our overall recommendation  If you have a need for a pocket pen and are determined to avoid the wretched Ballpoints of Blefuscu, Lilliput is the destination for you.  One contributor to this meta-review’s team is returning their sample as too small for their needs, but probably a good half of our bloggers have a Lilliput tucked into a pocket somewhere.  Pick up a friend’s before you buy, test-drive one at a shop, or purchase one from a dealer you can trust to take it back if it’s just too, errm, Lilliputian for you.

Where to get hold of one  Any number of fountain pen specialist sellers – in fact, nearly all of them – carry the Lilliput. However, the purple, pink and champagne versions are only available from Mostwanted Pens.

Thanks to  Kaweco for helping with access to several of the Lilliputs we reviewed – some of which we couldn’t let go of.

*The Brobdingnag is now marketed as the Supra, the original Swiftian soubriquet having proved a little long even for this barrel. ‘Cracking pen, though.