A little bit of history  Glaciers, weathering and tectonic plates were all involved to a greater or lesser extent in separating the Lothian volcanoes from the kingdom of Fife, but ever since the Forth Bridge became the world’s largest project management metaphor, both sides of the firth have been part of an on-and-off industrial heartland.  That engineering heritage was recently sparked in to life in one local business unit by the Kickstarter project which brought Namisu into being, and they’re now producing a couple of models in an increasingly diverse range of materials.  Some of us have been interested since those heady Kickstarter days, but the word is spreading fast…

How it looks  Like a streamlined version of the Nakaya-esque ‘bullet’ shape, polished-up for use as a prop in 1950s sci-fi B-movies – which is a long way round to saying that it’s minimalist, and we like that.  It looks exceedingly cool, whatever the material it’s cast in. The only catch is that said minimalist tube does rather like to roll off any surface you place it on! 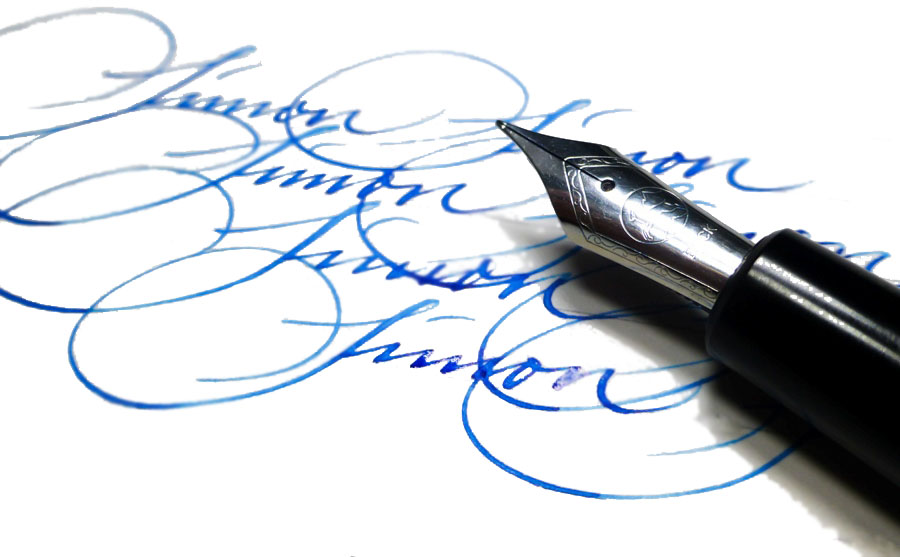 How it feels  Large but really rather comfortable.  Obviously, the different materials available make a quite a difference; the aluminium version is sturdy and light, the ebonite version is very warm to the touch, and the brass version is satisfyingly heavy – probably too heavy for many writers, but marvellous if you like a weightier pen.

How it smells  This criterion doesn’t feature in every meta-review, but appears here thanks to the ebonite version which Namisu kindly lent several of us to test.  Ebonite is a rather old-school material for a fountain pen, and it’s essentially just very hard rubber. That makes it tactile, light and warm to hold, which are all good things, but for those with sensitive noses there is also the detectable whiff of burnt tyres on a warm summer’s day. Of course, whether that’s a noxious pong or a nostalgic aroma is very much a matter of olfactory taste.

How it fills  Cartridge/converter.  There should be space in there for a longer international cartridge, and Namisu often provide a good Schmitt converter with the Nova too.

Crucially, how it writes…  This is very much dependent upon whether you go for one of Namisu’s nibs or fit your own. Namisu stocks Bock nibs, usually either the standard steel (occasionally black-coated, as above) or titanium.  The Bock #6 steel nibs are firm but quite pleasant to use, while the titanium option offers a bit of flex – although we had mixed feelings as to how smooth they were on the paper.  The feed and collar unscrew, and any other Bock #6 assembly will screw back in, so if you happen to have spare nibs from the larger Kaweco or Diplomat pens, for example, they’ll be easy to swap.  It’s also possible to buy unbranded Bock replacement nibs from sources such as Beaufort, although the gold option is as pricey as you might expect.  Helpfully, the actual metal is a standard shape, so other #6 nibs, for instance those made by JoWo, can be transplanted into the Bock feed and collar assembly without too much difficulty.

Pen! What is it good for?  The aluminium and ebonite versions are both good for longer writing sessions or quick note-taking – as long as you put the cap somewhere safe! The brass version could probably double up as some form of defensive weapon, but we wouldn’t recommend doing that with it.

VFM  At £45 the aluminium version is really very good value for a distinctive British-built fountain pen.  The brass and titanium versions get pricier, but are both still quite competitive for enthusiasts of those metals.  Ebonite nudges the ticket into three figures, which seemed a little steep to us for a pen which only has a basic steel nib, but it’s an unusual material, and while rather expensive this is hardly daylight robbery.  Match a Nova with a really good nib of your choice and you get something truly splendid for the outlay.

If this isn’t quite your cup of tea, but almost…  Namisu also make the Orion, a fairly similar shape but one which hasn’t appealed so much to us.  Or, if you like the look of the titanium Nova and want to spend ten times as much, there’s a Nakaya made from the same material.  Hmm.

Our overall recommendation  Go ahead and get one while you can!  The aluminium version is an affordable design classic, and you can always upgrade to other materials later on.  If you covet the brass version, though, move fast; Namisu took some persuading to make it at all and we understand that it is intended as a one-off at the moment (you could prove them wrong, of course).

Where to get hold of one  Right now, buying from Namisu directly is the only way. Some purchasers have found that customer service is not always their strong suit, so this is one where ordering carefully and waiting patiently are sensible strategies.

Thanks to  Namisu for lending several of us an ebonite Nova to play with.  The rest we bought with our own money!