A little bit of history  Online may be a bit of an unlikely name for a company which sells analogue tools digitally, but it’s working well enough for this German brand to be all over the schools and hobbyist market – in German-speaking countries, at least. As well as fountain pens for pupils who want to write properly, they’ve been branching-out to the calligraphy world for a couple of years – and as is often the case calligraphy is a synonym for ‘italic’. They handed a calligraphy kit to each blogger attending the Insights-X stationery fair in Nuremberg back in October, and since one of the United Inkdom team was there and a couple of locals (relatively speaking) wanted to join in, it was always going to be tempting to give it the full treatment. So, thanks to Natascha and Christian, it’s time for United Inkdom’s first pan-European meta-review!

How it looks  The first thing you see is a rather handsome bamboo box, which looks hardy enough to store the pen and spare nibs for a good few years. The pen itself looks like it’s largely made of wood; whether that’s solid wood or a composite, we couldn’t really tell, but either way there’s certainly some lignin in there. The cap and barrel both flare at the ends, so it’s the diametrical opposite to the over-used ‘cigar’ shape, and that makes a refreshing change too.

How it feels  Warm and comfortable, for the most part, as you’d expect from a wood finish. As a professional calligrapher, Natascha did find that the metal section was a little too short for total comfort in long writing sessions. Overall it’s a sensible size, though.

How it fills  It’s a standard cartridge/converter job, and impressively the kit comes with both. The small blue international cartridge may not get much of a look-in once you notice that there’s also a decent converter and even a bottle of brown ink included.

Crucially, how it writes…  There are three italic nibs of varying sizes; 0.8, 1.4 and 1.8mm, and they all write well, with a nice bit of bounce. The shape creates fairly crisp lines without having sharp corners which can tear up the paper, which is a good balance of attributes. The 0.8mm nib in particular can be used for every-day writing if you are an italic enthusiast, while the two wider nibs can do impressive things in the hands of an ambitious experimenter.

Pen! What is it good for?  This one’s for amateur calligraphers rather than professional, but it’s a promising way to get started. With the 0.8mm nib fitted, it wouldn’t be too outré to sneak this into a business meeting – depending upon the nature of your business, of course.

VFM  At around £50 this is not the cheapest calligraphy starter set out there, by any means. Nevertheless, it’s not bad value; the pen itself is well-made , those are surprisingly good nibs and the storage box is a desirable accessory itself. 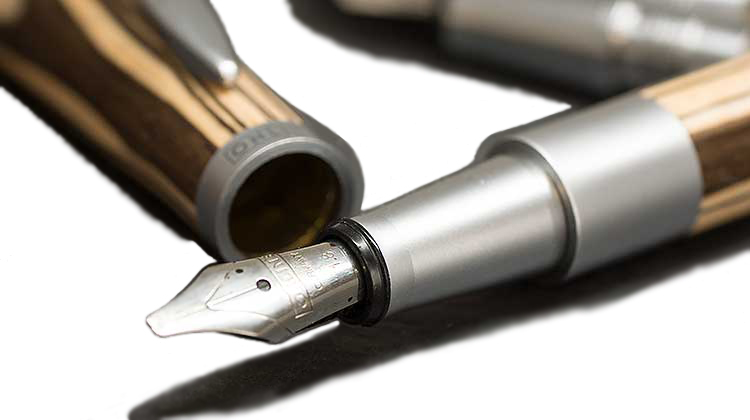 If this isn’t quite your cup of tea, but almost…  Online make a lot of other calligraphy sets, and there are comparable offerings from Sheaffer, Lamy, Kaweco and even Shropshire’s own Manuscript. Most of the cheaper alternatives are plastic, though.

Our overall recommendation  If you know someone who wants to get into italics and likes a kit which is well-presented, this is a good bet. It’s a pen for enthusiasts rather than professionals, but only a few of us can really aspire to earning our living from calligraphy anyway!

Where to get hold of one  This is easy enough on the continent, but surprisingly tricky in the UK. The surest method is probably to buy from Online, ermm, on-line.

Thanks to  Online for donating the review samples – and of course Natascha and Christian for being our international correspondents!