A little bit of history  It’s probably safe to say that TWSBI is a Marmite brand; you either love ’em or you hate ’em. However, the Precision line is one that those who love TWSBI will warm to, but also something that those who currently don’t indulge in TWSBIfication (mainly due to their reported quality control issues) may want to give a chance, as this pen and pencil set are rather robust in their build and look likely to be reliable. We quite enjoyed them! 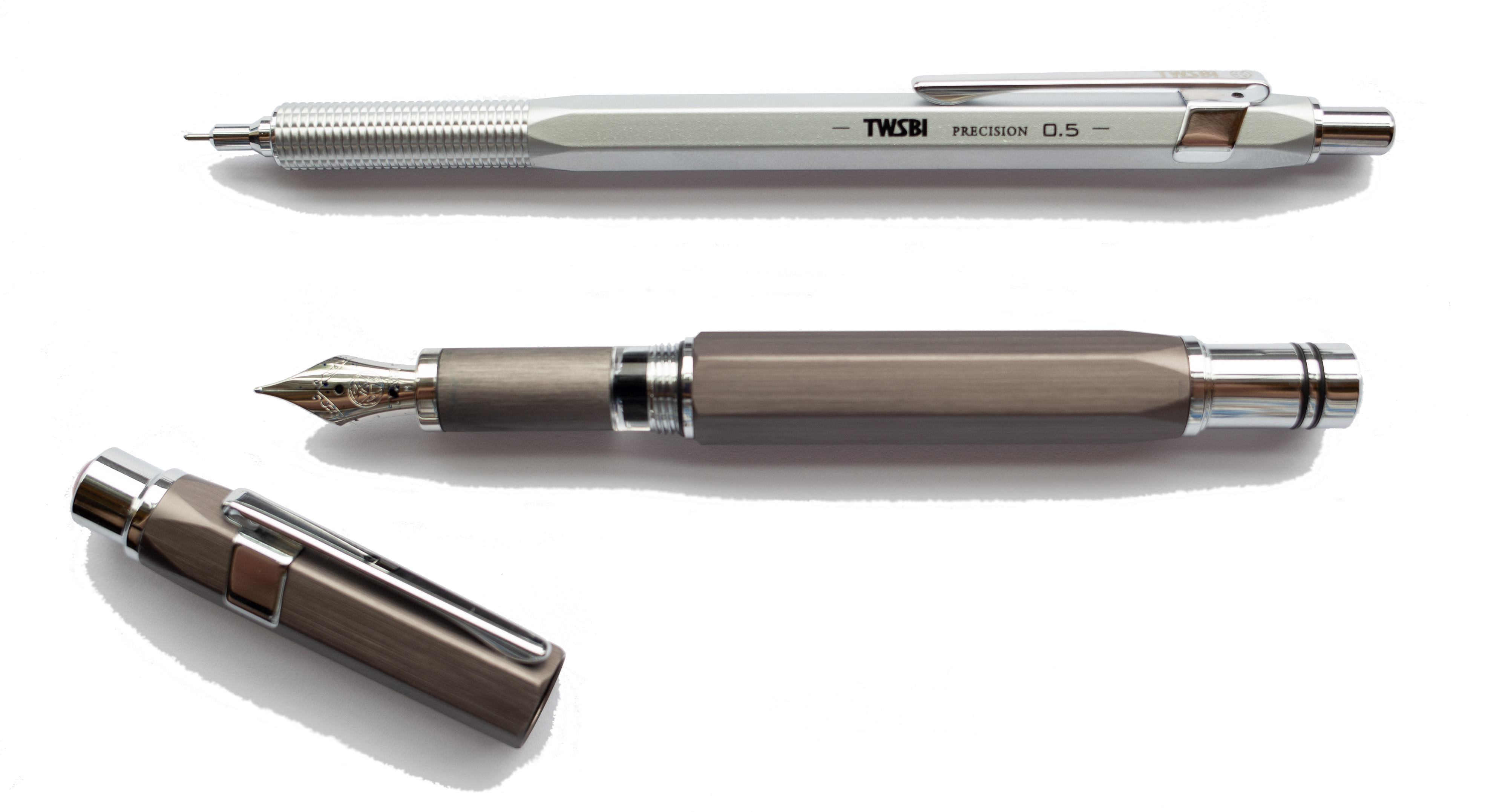 How it looks Some of us had our initial reservations about the fountain pen design, but it grows on you. The shape could be described as an “inverse hourglass” with a chunky middle section and thinner grip section and piston knob which almost gives it a “kit pen” aesthetic. The pencil design has more than a hint of Rotring about it, but this is in no sense a bad thing. 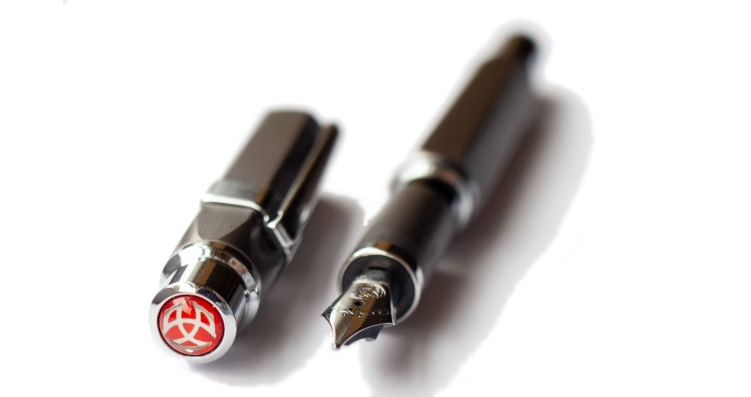 Currently the pen is only available in one finish, which is a matte grey brushed look. It is very smooth to the touch, however. The pencil is available in both silver and black but has a more metallic finish than its fountain pen counterpart, and also comes with a rather nice knurled grip. Those who really insist can also obtain a ballpoint in a similar body to that of the pencil, although we can’t imagine why you’d want to. The barrel on both the pen and pencil are faceted, which is a distinct design feature. Here it is compared to Daniel’s Montegrappa NeroUno Linea to show the facets: 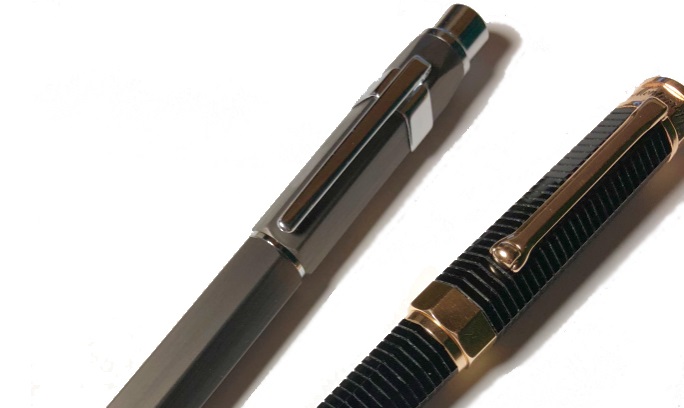 How it feels  Because of the materials used to make these instruments, they can feel reassuringly heavy in the hand once wielded. Both the pen and the pencil are nicely balanced, however, and this gives for a nice writing experience. The fountain pen cap does post, with a firm push, but this may not be the wisest move, partly for the obvious reason of making the pen top-heavy, but also because an accidental pumping of the piston may occur – and that can get very messy (Scribble’s carpet is reportedly still recovering).

It’s quite easy to write with both the pen and pencil for a long time without any sort of fatigue. This is especially pleasing considering that fountain pen is a piston filler, which leads nicely on to…

How it fills  Segues! The fountain pen is, in typical TWSBI fashion, a piston filler. This gives you plenty of ink and allows you to write for quite a while. Some people do have their reservations about piston fillers as they can require a bit more maintenance when cleaning, though it isn’t too much hassle truth be told – and as is the case for all TWSBI pens, the tools required are all in the box.

The pencil refills are standard leads that you can buy from your favourite stationer – be it online or on the high street.

Crucially, how it writes  Both the fountain pen and the pencil both write very well. In part, the pencil performance is dependent upon what lead you have in it (partly the case with inks in the pen, though not to such an extent). Because both are well balanced, you do get a nice writing experience coupled with the nib/lead. The pen is available in all the normal TWSBI steel offerings, including stub nibs. We found no problems in terms of hard starts or skips with the pen. Our bleistift expert did notice, however, that the test pencil pushed-through rather more lead than is normal beyond the sleeve, which can increase the risk of snapping. 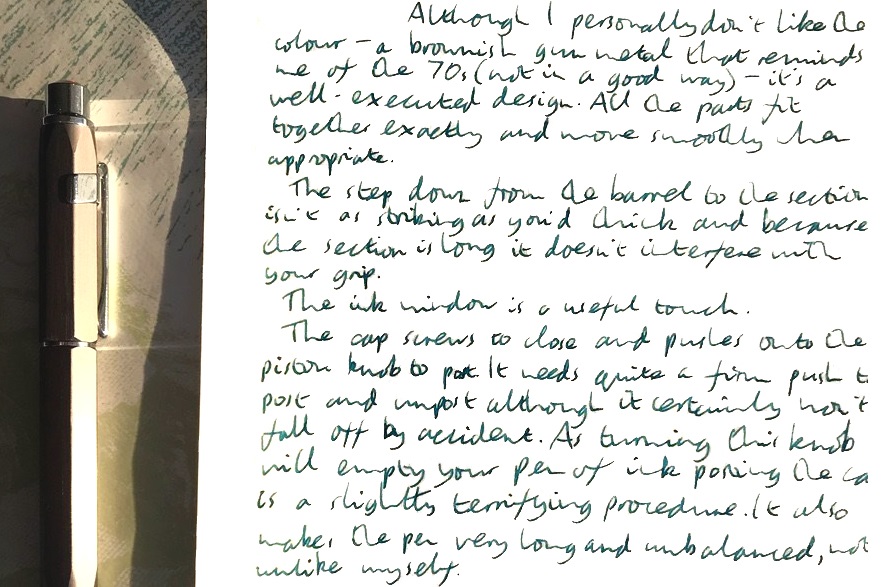 Pen(cil)! What is it good for?  This set would find itself fitting-in nicely in a business context, as well at one’s own table for personal use. The pen design aesthetic is somewhat similar to that of the famed Lamy 2000, but without the price tag (and gold nib, of course). The pencil’s echoing of (and in some senses improvement upon) the Rotring tradition would fit it for a design studio – if you can find one which still uses pencils.

Value For Money  Coming in at around £70-80 for the pen and mid £20s for the pencil, this may be an investment for some. But it’s a reliable pen, and a piston filler too, so it has the makings of a ‘workhorse’ pen which could end up paying for itself if used enough; no overpriced cartridges here, and less plastic waste too. The pencil is decent value, especially compared to the Rotring models it is apparently pitched against.

If this isn’t quite your cup of tea  There’s a lot going for this pen. If you’re looking for recommendations for something similar to this, first you’d have to consider which aspect(s) you’re most put off by. If it’s the piston fill, then look for a cartridge/converter pen (this could possibly push you into gold nib territory if you’re willing to spend a little bit extra – Platinum #3776 comes to mind, which is a fantastic pen). If you enjoy the design, the Lamy 2000, as mentioned above, may be worth looking into; this would set you back an extra ~£50 (almost twice the price of the Precision), though as is the case with the Precision, you’re looking at a reliable workhorse that is worth (to most) the investment and so you can find comfort in that fact – it also comes with a gold nib and is more streamlined if you enjoy the matte grey brushed look on the Precision that you also get on the 2000 but not the “inverse hourglass” shape. If the pencil doesn’t quite float your boat, Rotring really is the obvious place to look.

There are, of course, other pen models within the TWSBI line-up that may tickle your fancy… 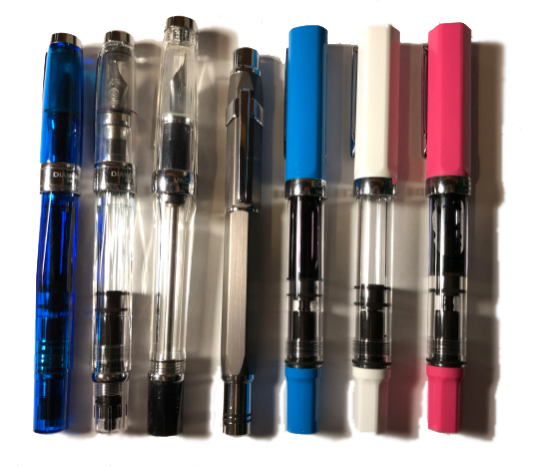 Our overall recommendation  The Precision FP is a good, reliable pen, which has the potential to become a trusty workhorse without breaking the bank. None of us had any problems in terms of the writing experience, and the only cause for concern were our own personal preferences when it comes to design. All in all, a thumbs up! The pencil is a slightly more mixed offering given the issue Matthias identified with excessive lead protrusion, but still great value for the price demanded.

Where to get one  TWSBI have plenty of retailers in the UK now, and they are not difficult to find on the whole, although new models can sell out quickly. Our test pen was contributed by the marvellous Write Here of Shrewsbury (who, at time of writing, have this pen on special offer!) while the pencil was procured in this case from the equally splendid Writing Desk of Bury St. Edmunds.

Thanks to Write Here for sending a pen our way before their initial stock sold out!