A little bit of history  War, according the the Prussian theorist Carl von Clausewitz, is the continuation of diplomacy by other means – and it’s just as well that he created that memorable quote or the idea of a German brand named Diplomat launching a pen shaped like a Zeppelin would seem awfully ironic.  Maybe it’s a just a very subtle joke.  But the design does make for a highly desirable pen, and when Diplomat tipped us off that they were making a gold nib available, and launching a third colour-scheme for the pen too, we had to fire up the engines.

How it looks  Like an iconic Teutonic dirigible with a payload of serious nibbage – and in this case, appearances do not deceive.  Seriously though, this is an instantly recognisable design, but still a huge departure from Diplomat’s usual clean, sober business lines.  At least one of these has sauntered down the Thames during the test period (without being shot at this time), but it’s probably still fair to say that you’ll either love the design or loathe it.  Having said that, we’ve yet to encounter anyone who thinks it’s anything other than massively cool, and that goes for the handsome aluminium box it comes in, too.  That matt finish does make it hard to take a decent snap of, though! 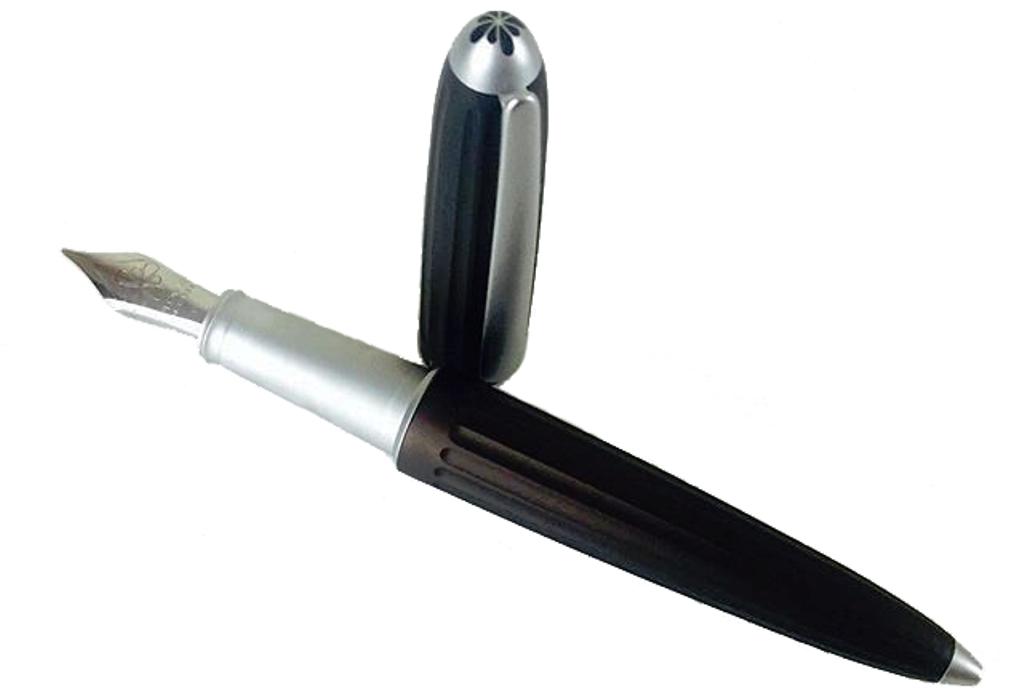 How it feels  Sturdy, and solid; the body is aluminium all the way.  That cap can take a bit of effort to lift off, but then again it does make it less likely to come loose in your pocket. But the grip is quite tactile and the weight is not extreme, by any means.  Long writing sessions are comfortable, and despite the showy looks this is still a pen built for real writing.  ‘Just the thing for recording notes during those long flights over the Atlantic, then.

How it fills  With a cartridge or a converter.  The supplied converter is well-made and holds enough ink for a typical day in the office.

Crucially, how it writes…  This is what Diplomat are famous for; their steel nibs are an advert for steel nibs!  We tried every size going and found them all splendiferously smooth. The gold nib (no prizes for guessing which of us bagged that) is a different proposition altogether; it’s still smooth, but it sings while it slides and produces a modest amount of line variation too.  All four options came out well in our tests.

Pen! What is it good for?  Come on, you have to take this to work, don’t you?  Next time some bore is banging on about their new mobile phone, put an Aero into action and watch everyone’s attention wander over to some old-tech.  It may be shaped like a bomber but it’s not one for, erm, stealth… 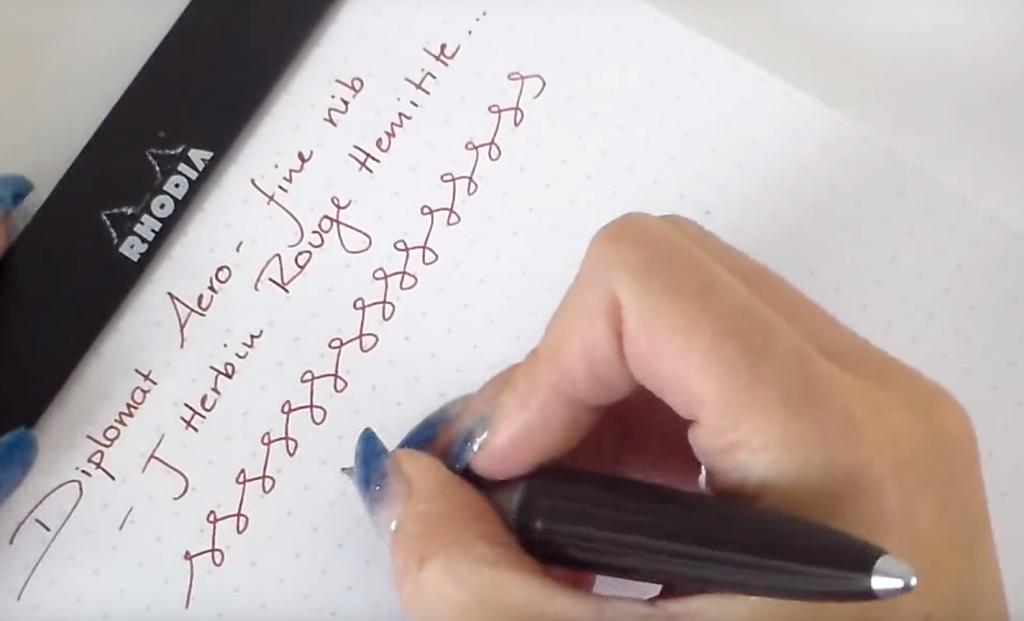 VFM  Well, it’s not cheap, and for most of us this will be a pen to save up for.  On the strength of this four-person review, we think you’re unlikely to feel disappointed, even if the prices tend to be right at the upper end of what it would be reasonable to pay for a steel nib – usually £100 to £120 (although some very competitive deals are available on-line).  We don’t have official UK retail prices for the gold nibbed Aero yet, but our recommendation to retailers would be to avoid a big mark-up; if the price can be kept down to around £150 for the gold nib these ought to fly off the shelves while still making a fair return.

If this isn’t quite your cup of tea, but almost…  Then perhaps you shouldn’t buy a fountain pen shaped like a hydrogen-filled balloon.  The alternative options include… every other fountain pen ever made!  But if you like the Diplomat style generally and those very smooth steel nibs, they do have less airborne designs, some of them for prices down at ground level, too.  There is also a pencil variant of the Aero, which they really should have called the Lead Zeppelin, but someone didn’t get the memo (communication breakdown – it’s always the same). 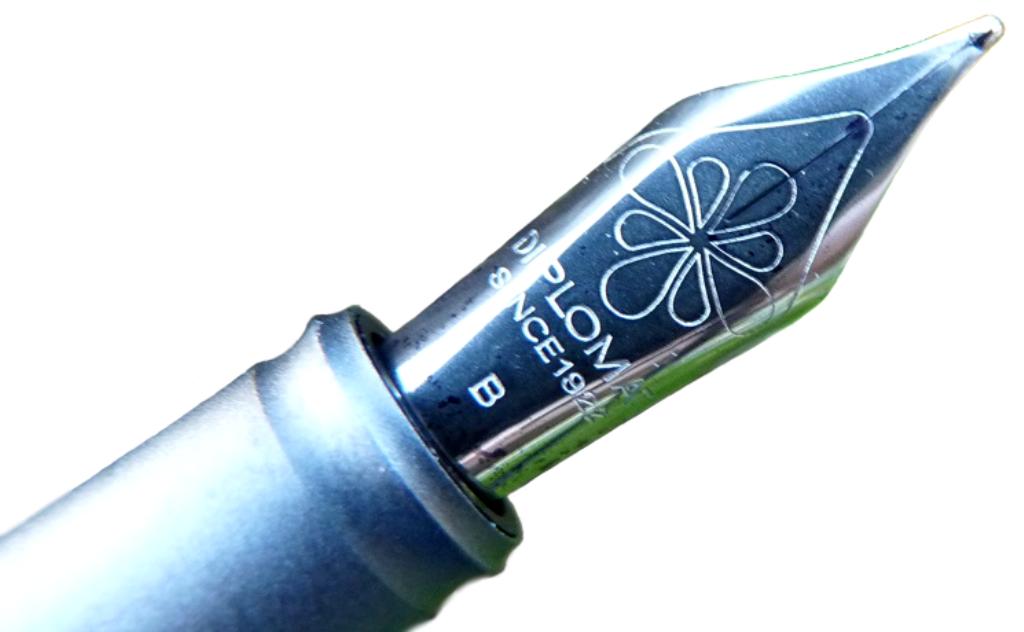 Our overall recommendation  Happy Christmas, war is over – spend the peace dividend on one of these!  Put it this way; we all purchased one (admittedly with a much-appreciated discount) to carry out this meta-review, and none of us are surrendering ours. If you’ve lusted after one of these for ages and were just waiting the white and brown finishes to be joined by a black version, your wait is over.

Where to get hold of one  Cardington Sheds 1 and 2, or failing that, any good pen retailer. Many of our favourite UK pen shops already carry the steel-tipped Aero, and we hope some will start selling the gold-nibbed version soon.

Thanks to  The very helpful team at Helit (the company which owns the Diplomat brand) for getting a sample of every nib and every colour to us, just as the black finish was released – and for a little assistance in making the review affordable too.