A little bit of history  In the eighteenth and nineteenth centuries, a succession of European countries established footholds in the East Indies, and eventually consolidated to the point that a small island off the coast of one continent ‘owned’ a whole sub-continent half way around the globe. Dark deeds were done. Eventually the mists cleared, and India was left with the aftermath of the old Empire, and there were one or two advantages; the railways, English language, the civil service…. OK, maybe not the civil service, but you get the point – it wasn’t all bad. Then a few decades later, a nice chap from Arkansas was travelling in India and found another curious carry-over; people were still using fountain pens – and making them, too. Kevin was so impressed he set up a business to bring these craftily-created pens to an international audience, and so the Fountain Pen Revolution was fomented. The Jaipur is the latest in the line of FPR specials, and when United Inkdom was asked to put them through their paces we gladly took delivery of several different colours and nibs so that we could test the whole range.

How it looks  The Jaipur is available in two main costumes; business suit or party frock. The plain-coloured version looks suitably formal, and includes an ink window which gives a functional view of what’s in the fuel tank. The demonstrator comes in a range of finishes, all of which shout ‘this is a pen for having fun with’. The two-tone nib pulls off the clever trick of fitting in with either message.

How it feels  The natural resin is warm and comfortable to the touch – and ever so slightly fruity to the nose (but you get used to that pretty quickly). It’s a fairly light pen of a comfortable size for the majority of users. 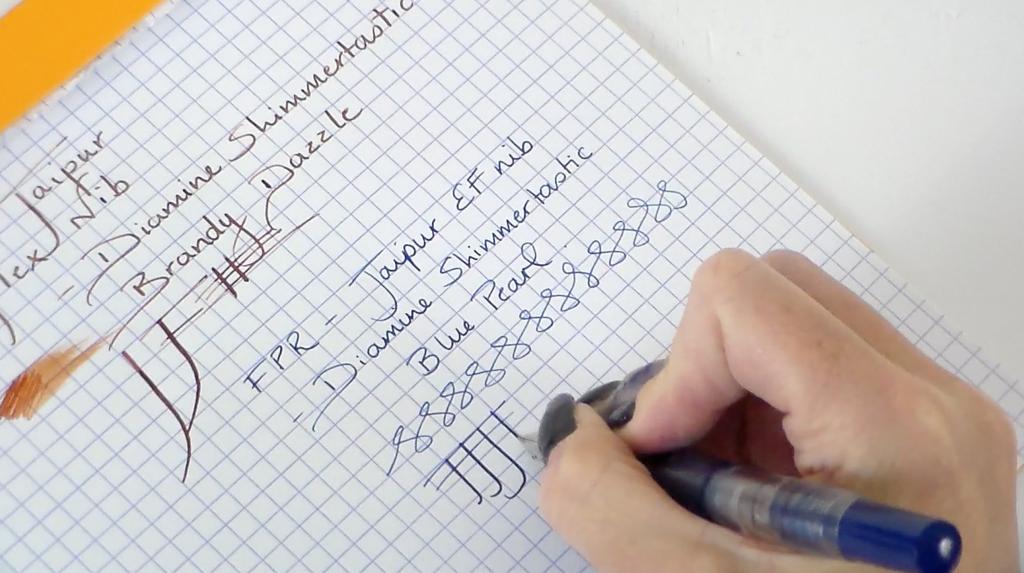 How it fills  Now here’s a novel thing; these are hand-made piston-fillers. They look like nothing else, and the workings visible in the demonstrator body in particular appear almost organic. If the famed Pelikan is a CD, this is the 78rpm vinyl alternative. But it all works, can be dismantled for cleaning, and holds plenty enough ink. Being made by humans rather than laser-guided robots, the Jaipur can experience the occasional minor leak, so it’s perhaps not going to be our top choice for a pen to take to work – but when used at home, a quick wipe with a tissue is all that’s ever required before getting down to writing.

Crucially, how it writes…  Extraordinarily well. The standard round-ended nibs are firm and impressively smooth, and would be a good introduction to the difference a fountain pen makes, should you need to convert anyone languishing in the slough of ballpoint despond. The flex nibs are justly famous as the most affordable flex that money can buy; they produce line variation without enormous effort and no special expertise is required to get started; even some of our reviewers who are not usually flex fans were almost won over!

Pen! What is it good for?  This is a seriously affordable pen, so it’s fairly good for beginners (occasional dribbles notwithstanding), and the ink capacity makes it a strong contender for an artist’s pen too. As a low-risk way of trying out a flex nib, it’s unbeatable; the cost is so low that there’s really nothing to lose, and if you’re at all unsure about whether you’ll like it you can ask for a standard firm nib to be included in the package – the feed is a simple friction-fit affair so swapping them is a straightforward operation.

VFM  These pens give you a chance to play, tinker and experiment, to have fun writing and to support sustainable employment in a developing economy, all for about £16. There is really just no reason to quibble – all our reviewers consider the Jaipur brilliant value. 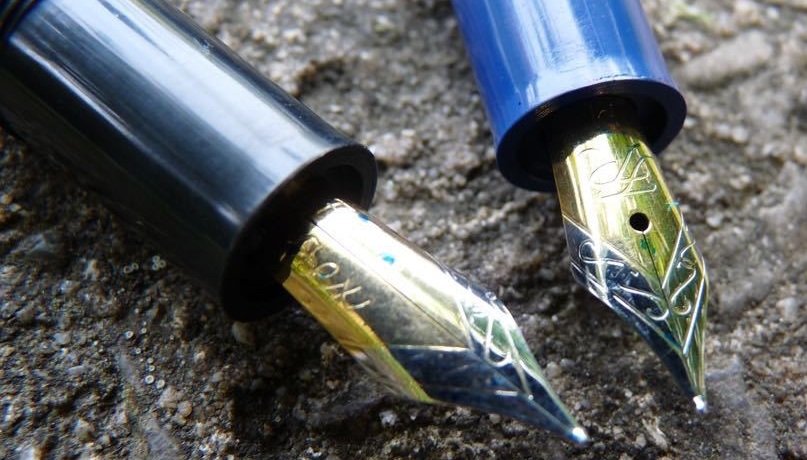 If this isn’t quite your cup of tea, but almost…  Have a mooch around the FPR website and size up a few of their other models; there is quite a range, and most offer the same options as regards nibs.  For flex enthusiasts on a budget, there is little on offer elsewhere which really competes.

Our overall recommendation  Just buy one already! If you enjoy getting to know how a fountain pen works, want to give flex a try, or just want something a bit different in the pen-pot, there’s just no reason not to. These are not hi-tech over-produced pens, certainly, but if something does go wrong FPR’s customer service is fast and friendly. Aside from preparing you for a minor ink leak here and there, we really have no reservations! 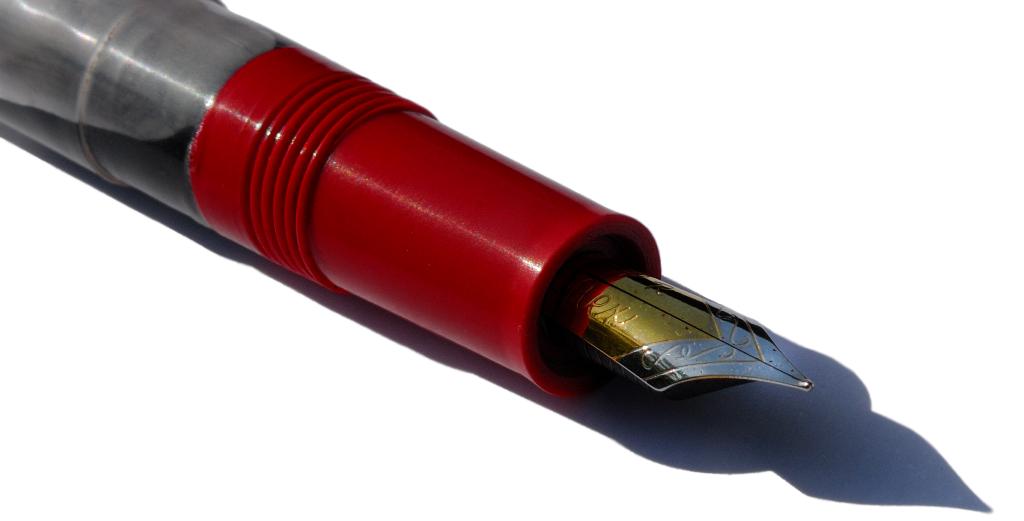 Where to get hold of one  Direct is the only way; head straight to Fountain Pen Revolution’s site and fill your boots. 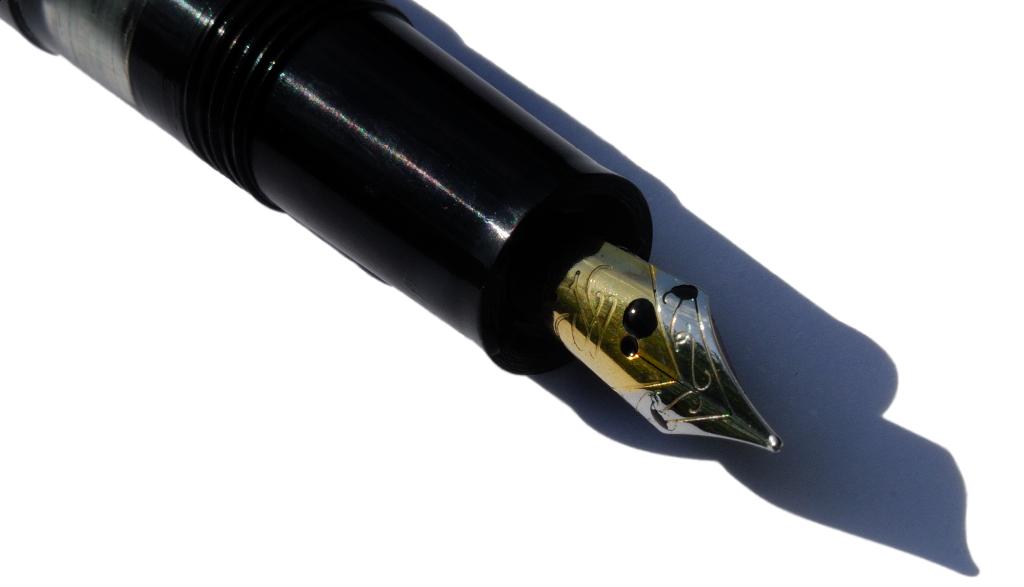 Thanks to  Kevin and the whole family at Fountain Pen Revolution.

Giveaway!  Two lucky readers were given a chance to win a Jaipur in the colour of their choice (with their preferred nib, too) in this week’s piston-powered bonus bonanza (is that a tautology?). We asked entrants to drop us a line in the comments box with their wildest ideas about what the next clever product from FPR should be called, and some of them were very creative indeed! We picked two winners – Mike Church and Rai Toffoletto – via random.org on 15 November, and Kevin will get the booty winging its way as soon as we have their delivery details.