A little bit of history  Fa Vo is a brand that is new to the scene and originates from Portugal (the name means “honeycomb” in Portuguese). The company’s stated mission is to produce simplistic designs that are not just well priced but also environmentally friendly, and we first came across them at the London Stationery Show last April.

How it looks  This is very much a plain, no-nonsense presentation. From a distance the notebooks look fairly standard and plain, but the real magic is when you get up close to them and notice the minute details, like the lie-flat sewn binding. It’s also been noted that the small grains you see in the notebook (we’ve been sent the “vanilla”  colour) gives the notebook character.

How it feels  Initially it would appear that the notebook would have a slight rough texture to it, but the cover is very smooth. Oddly enough, even though made from recycled paper, the pages themselves are smooth – definitely more textured than the likes of Rhodia, but smoother than is typical for recycled paper.

Crucially, how it handles a fountain pen…  As previously mentioned, the notebook uses recycled paper – so what you’re getting isn’t going to be akin to the great writing experience of, say, Clairefontaine. However, it was pleasantly surprising, because for recycled paper this did quite well. We noticed some bleed and minor show-through, but we could also see some shading and a slight amount of sheen on certain tests. So it’s reassuring that the writing won’t look ‘flat’ and without dimension on the page.

Pulp! What is it good for?  This is the perfect notebook for throwing in a bag and using on the go. Great if you want something bigger than a pocket notebook, but without breaking the bank or getting something too fancy that you would be worried about getting scuffed up. It also handles graphite very well indeed, so it has plenty of potential as a small portable sketchbook or design workbook.

If this isn’t quite your cup of tea, but almost…  It depends what you’d like more or less of.  If it’s the design aspect then Paperblanks might be what you want, if it’s paper quality then it’s probably Clairefontaine, Tomoe River or the Madefor.ink range that we’d point you to first.

Our overall recommendation  Thumbs-up from us; a good book for working in.

Where to get hold of one  We got ours from Nero’s Notes, and they’re also available direct from FaVo, on Etsy and more recently from Cult Pens too. 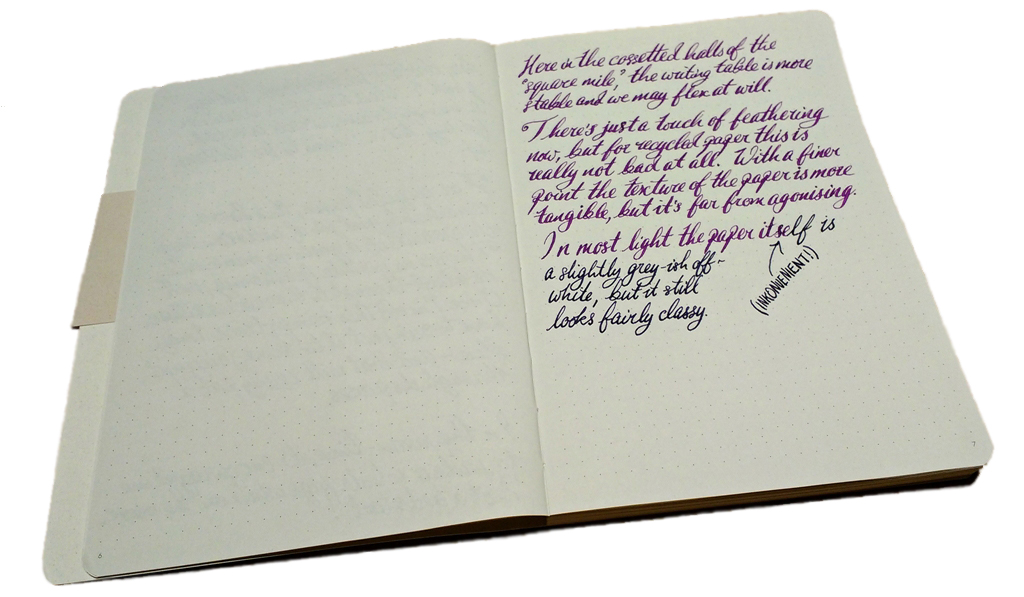 Thanks to  Nero’s Notes for the review samples