A little bit of history When the jurist Lord Monboddo – who we perhaps have to admit was a bit of an eccentric – was in London for one of his yearly visits in 1787, he attended a hearing of the Court of King’s Bench which he, trained in Roman-based law, had relatively little to contribute to. According to legend, the structure started to collapse, plaster rained from the ceiling and everyone rushed from the building, wigs flying, only to realise their esteemed guest had been left behind. Monboddo was entreated to stir himself and asked why he had not already done so; his response was simply that he had assumed this was “an annual ceremony, with which, as an alien, he had nothing to do”. 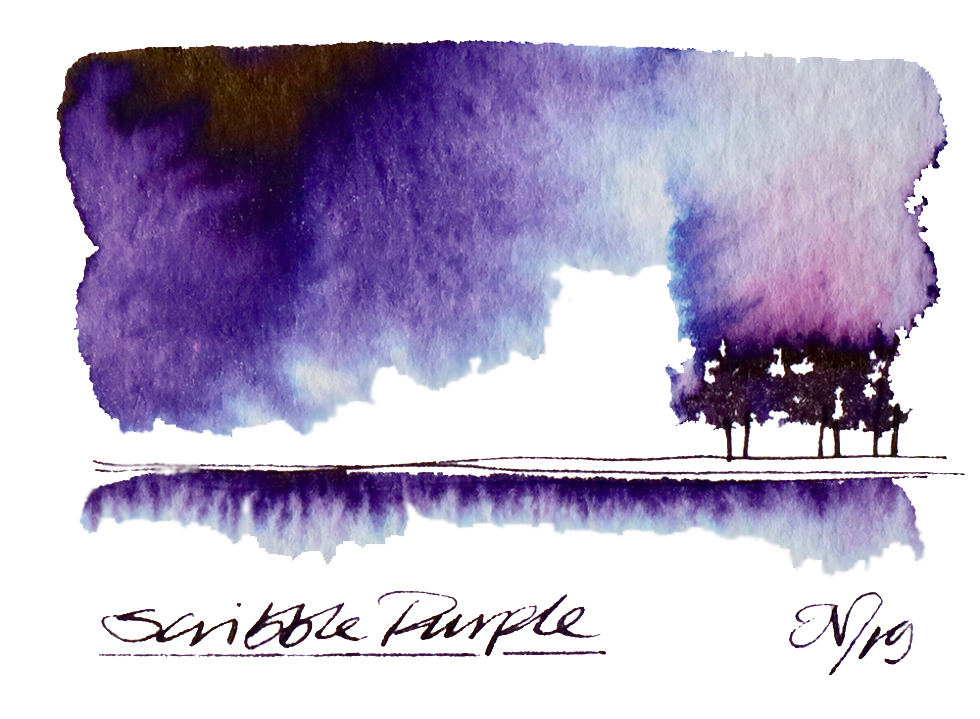 Perhaps he may have had a point; bubbles come, and bubbles go.  When the investment bubble of the Darien Gap scheme bankrupted Scotland in the late seventeenth century, it either sought aid from, or was forced to go cap-in-hand to (depending upon your interpretation) England, and the 1707 Act of Union followed. That Union soon fell prey to its own difficulties with the South Sea Bubble, generating debts so massive that they were only finally paid off in 2015, just in time for a new have-cake-and-eat-it bubble to arise in its place the next year. The latter looks likely to put paid to the local market for luxury writing equipment, and indeed those united kingdoms that this site was named in tribute to. But, thanks to a similarly endangered enterprise entitled ‘Fountain Pens UK’ on social media, we can perhaps at least have one last inky hurrah. 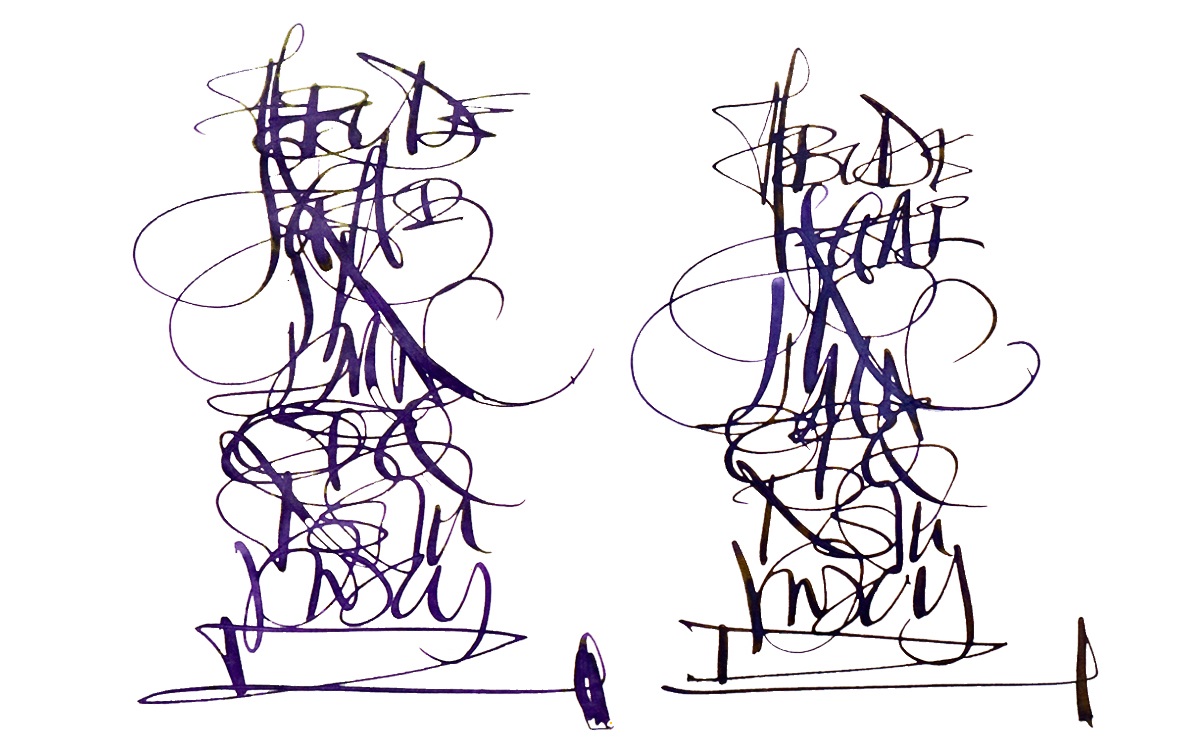 Earlier in 2019, the members of FPUK starting collaborating with Diamine, a brand which has itself been around long enough to have been formally set in a few different countries without actually relocating. The collaboration was fulsome and detailed, with Nick Stewart testing no less than ten prototypes and Scribble then trying the three which made the shortlist. The FPUK group voted on the final formula for production and, in an example of what can happen in properly regulated democracy (perhaps we’d best steer clear of that one here), decided that two should share the winner’s podium. The administrators insisted that one should be named in honour of a certain purple ink enthusiast, and the other as a tribute to his hat, which is somewhat embarrassing for the author of this piece but we’ve got this far using first person plural and it’s too late to come over all gushing now. Lord Monboddo didn’t have a purple hat, because both the millinery style in question and synthesised aniline purple dye came about in the mid nineteenth century, a good fifty years or more after his demise, but the extremely distantly related (probably) Scribble Monboddo does – and is wearing it whilst writing this piece. Pictures or it didn’t happen, eh? 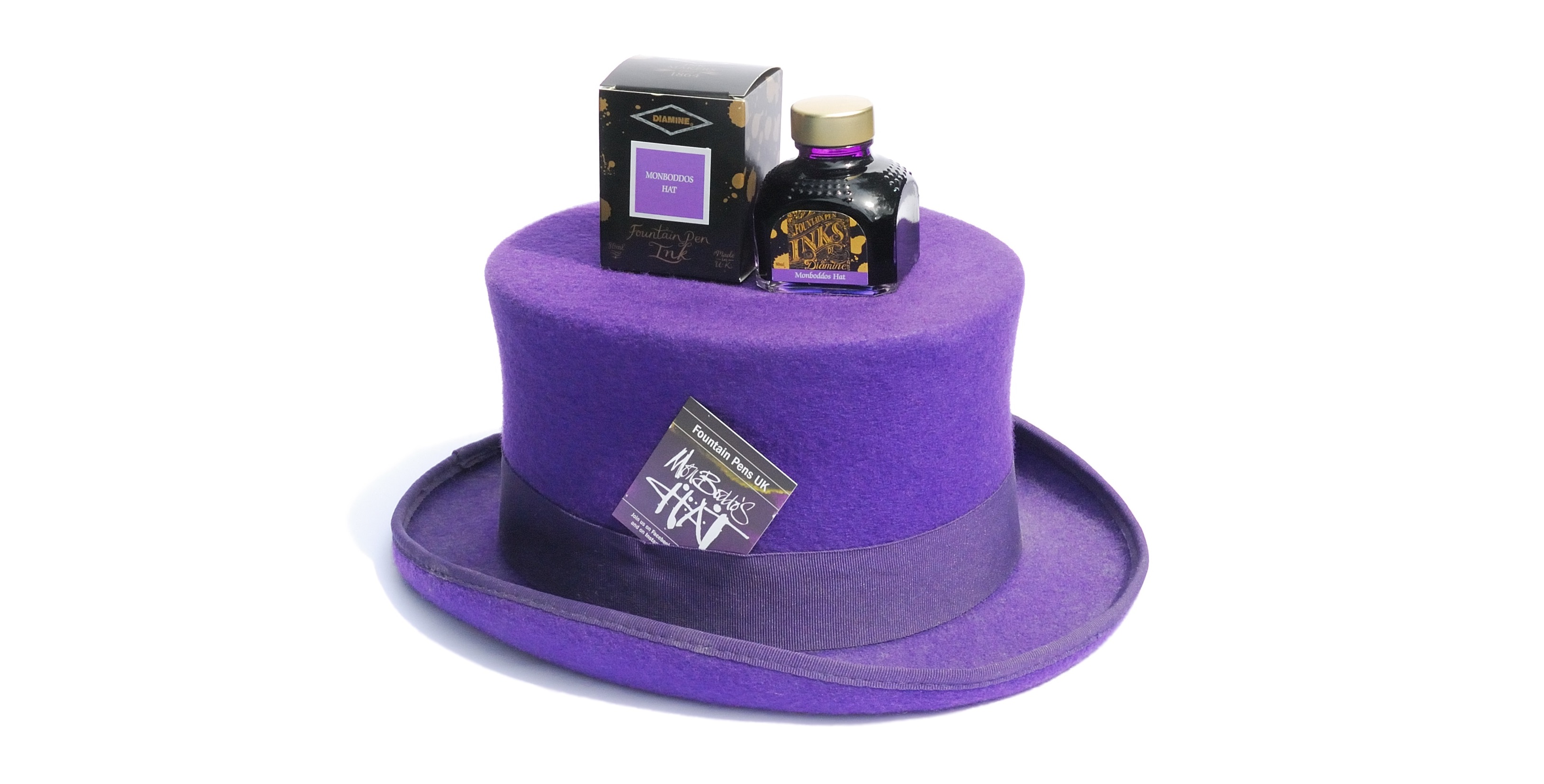 Bubbles come, and bubbles go. Let’s waft this one around for a bit before it pops…

How it looks  Purple, astonishingly enough! Scribble Purple, which started life as prototype #765, is a rich, dark purple with, rather unusually, a golden sheen when it is laid on especially thickly. Prototype #768x became Monboddo’s Hat, a brighter pinkish-red (but not wishy-washy) purple with more of a green sheen. 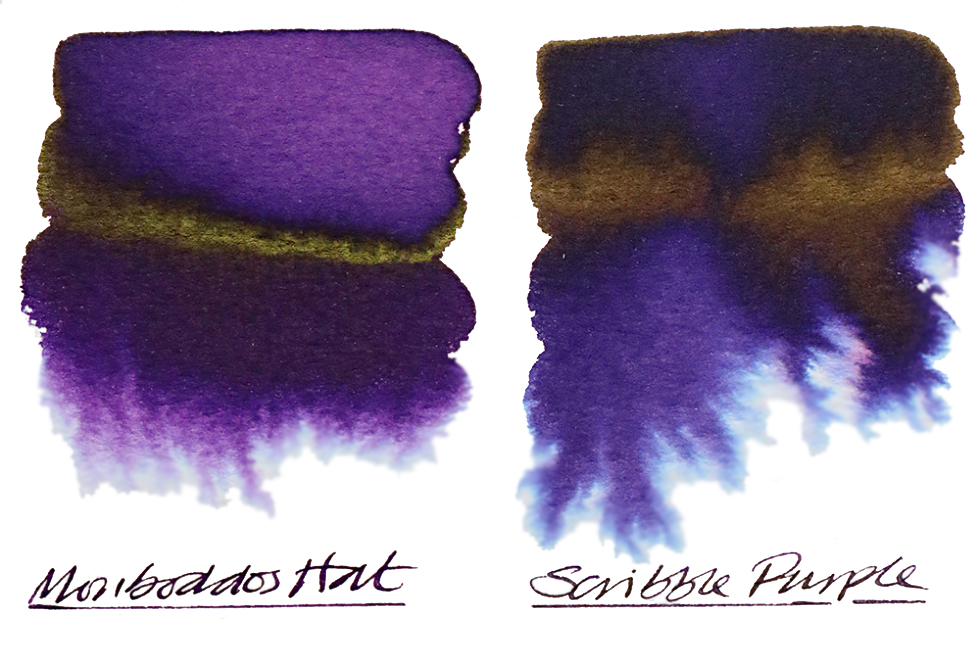 How it smells  Nothing to sniff here – move along benodorously now. 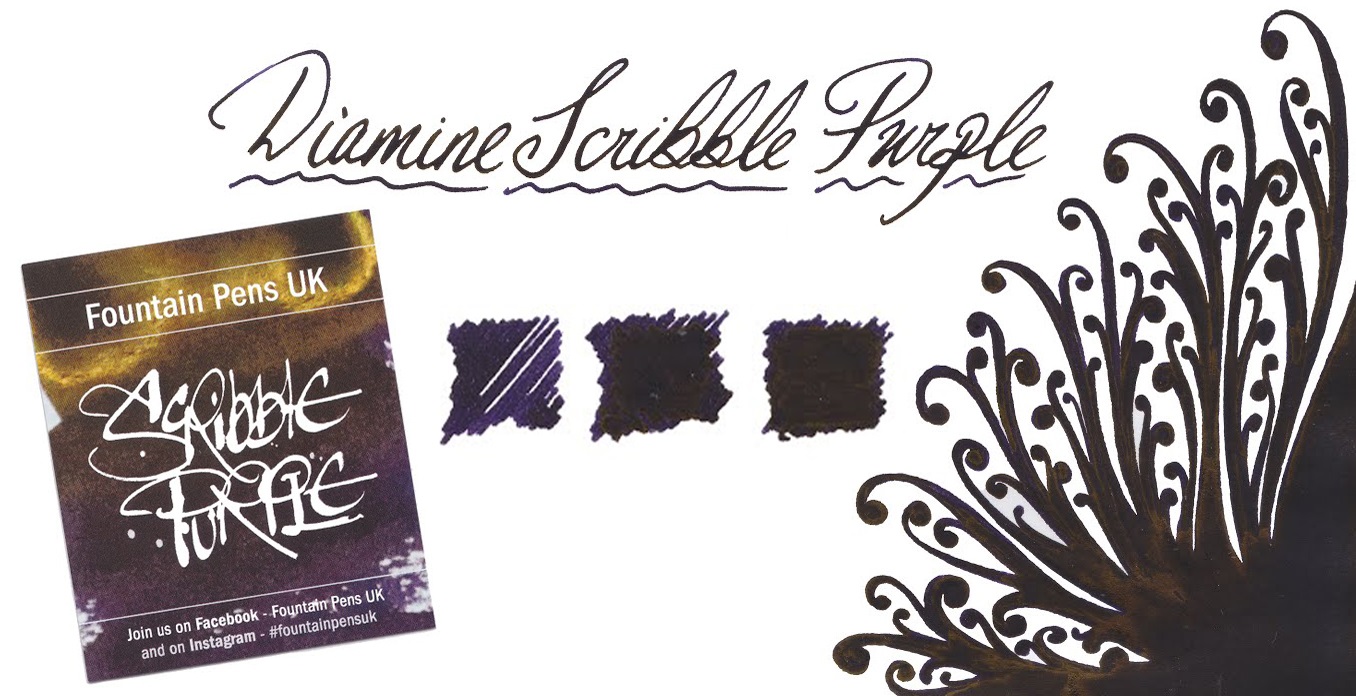 How it travels  These inks are available in both of Diamine’s standard carriers, the 30ml plastic Bradgate bottle (incidentally named after the birthplace of Lady Jane Grey, if you fancy another little bit of history) and the 80ml ‘chicken pox’ glass flask. Both are practical conveyances for the ink, and the larger 80ml size also come with collectable cards designed by Nick Stewart himself.

Crucially, how it writes…  Now, there are some differences here, which may helpfully justify buying both.  Scribble Purple is saturated but nevertheless flows as well as standard fountain pen ink usually does, with no sin to report. Monboddo’s Hat is noticeably drier, so perhaps not so ideal for everyday purposes – but excellent if you have an overly-wet feed to tame, or if you are working on slowly-written calligraphic masterpieces.

Ink! What is it good for?  If you’re lucky enough to find work in the lean years ahead, Scribble Purple is probably an ink which you can take with you; it’s so dark that the uninitiated probably won’t distinguish the difference from boring blue-black from a distance, while cognoscenti will be quietly impressed. Monboddo’s Hat is an ink for creative purposes, as writers of doodle-laden journals and the like are already discovering.

VFM  Diamine have a reputation as one of best-value manufacturers of ink anywhere, and these two special editions are no exception. Writers in what is left of Britain once Scotland departs and the borders go up should be able to enjoy access as long as funds allow. Moderate stockpiling may be wise elsewhere, but don’t go overboard – it may look delicious, but you really shouldn’t drink it.

If this isn’t quite your cup of tea, but almost…  Then buy the other one!

Our overall recommendation  If you want a purple ink which you can use for writing with any fountain pen, without interruptions other than refilling, bag some Scribble Purple. If you enjoy experimenting with calligraphy or have an absolute fire-hose of a vintage pen and wish to, erm, take back control (oh dear) then Monboddo’s Hat is a great choice too.

Where to get hold of some  All of your favourite fountain pen retailers and etailers sell these inks, which have now made it to the standard Diamine range internationally. It’s also possible to buy from Diamine directly.

Thanks to  Bernardo and all the members of the FPUK group for the initiative, Diamine for the enthusiastic collaboration – and all our readers and contributors for making the Inkdom, while it lasted, a kinder, gentler and more creative place.