A little bit of history  For anyone who’s just survived the British summer, it can be hard to believe that wasps do anything useful at all; the big ones ruin picnics and the tiny ones kill bees. But as it happens, some of those very small wasps inadvertently serve a human purpose by making nests on the surface of the sturdy oak tree – because those ‘iron galls’ in turn provide the source material for a permanent ink formula recipe used since Pliny the Elder. Pliny Senior unfortunately failed to describe the formula in sufficient detail before the eruption of Vesuvius did for him, but patient scribes have been perfecting it ever since. When it works well, it can preserve documents for millennia.  When it goes wrong and the ink gets too acidic, it can eat the writing surface – and it has form for eating fountain pens too, so it’s a brave manufacturer who ventures into this market.  But Diamine, KWZ and Rohrer and Klingner have found ways to make the recipe safe, and now Platinum have come along with no less than six shades of iron gall ink to get creative with. The United Inkdom team set out to put it to the test – said team including a chemist, a calligrapher and two historians, so there was no fear of punches being pulled. 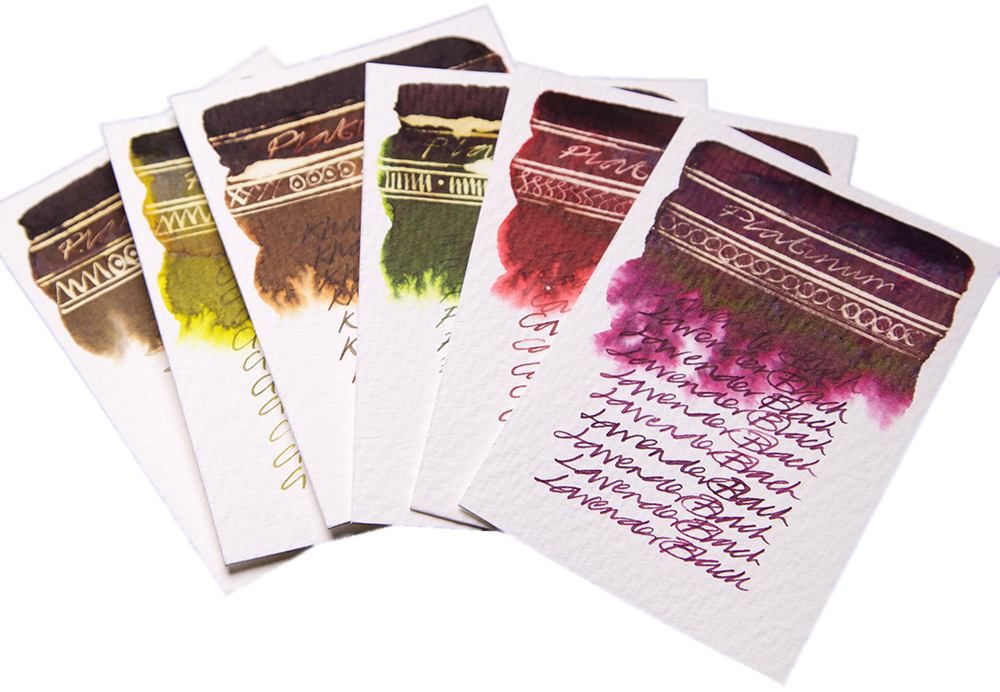 How it looks  This changes in the first minute that it spends on the paper – it goes on quite bright, especially the Citrus and Cassis varieties, then quickly darkens as it oxidises.  None of the shades darken all the way to black, so the naming convention (Lavender Black, Forest Black, etc.) is a little misleading, but the transformation from light to dark is impressive – and rather fascinating to watch. 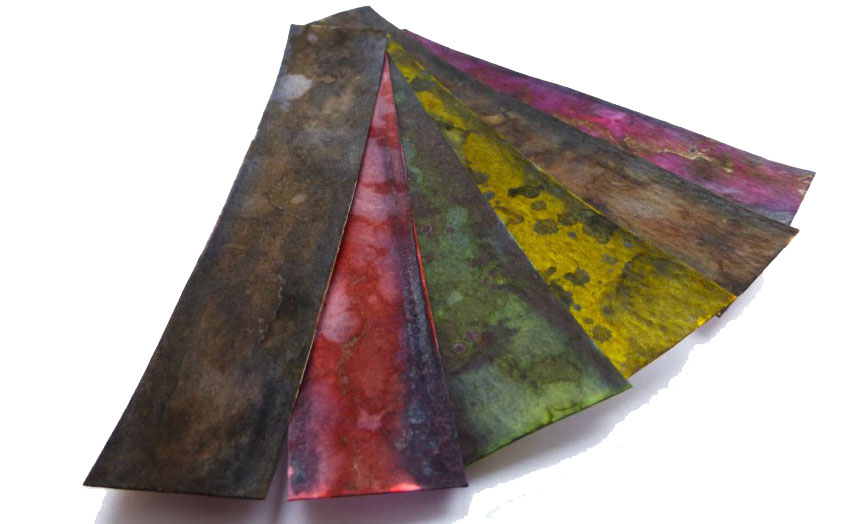 How it smells  Now let’s be honest, not all specialist inks are terribly pleasant to the nose . This one requires a chemical reaction to work, which you can actually see in front of your eyes, as the video below demonstrates – and as this ink is not pigment-based, it’s not technically watching paint dry.  But despite all that exciting stuff going on, there’s nothing malodorous to report.  Phew.

Crucially, how it writes…  Perfectly well! It’s perhaps just a touch drier than some ‘standard’ fountain pen inks, but a decent fountain pen can handle it with ease.  Given that this is still a permanent ink and even the new, gentler, formula has some acidity to it, a fountain pen which doesn’t dry out too easily is a wise choice (one of Platinum’s own #3776 models is a good place to start), and of course it’s worth giving it a good flush out after a few days with iron gall ink in there.  But you can pop it into the barrel of your ‘serious nibbage’ without too much fear of damage. 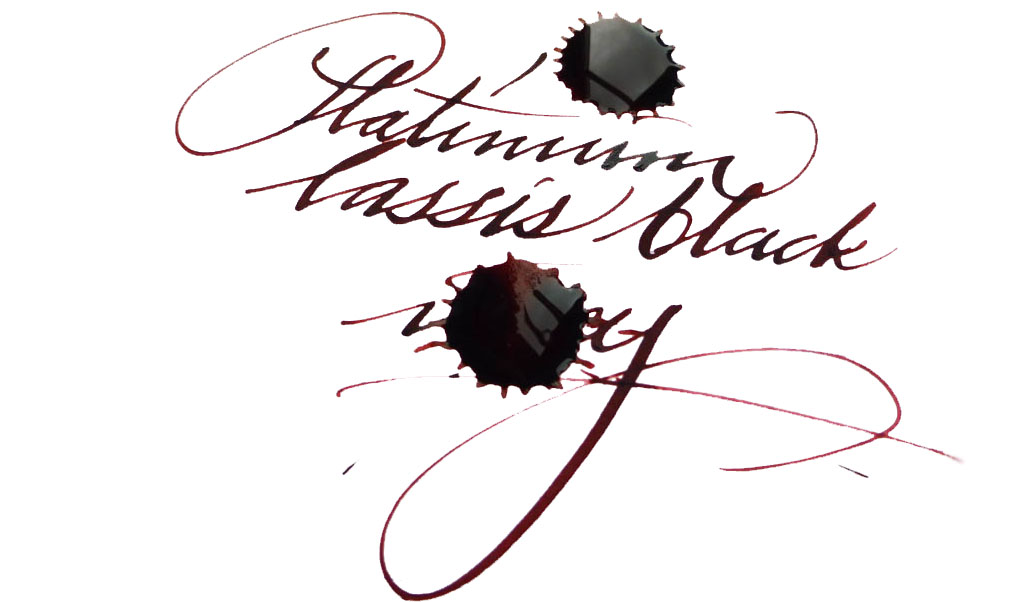 Ink! What is it good for?  As Nick capably demonstrates, it’s great for calligraphy.  Since it’s an iron gall ink it should be acceptable if you’re signing a marriage register, and as it’s permanent it should do for addressing the wedding invitations too (the ink is partially washable, but even if it gets rained on the text will still be legible).  Lavender Black, which seems to be the consensus pick of the bunch, could be good for one’s secret diary (you have one of those, right?). Or you could just have fun with them, like we did!

VFM  These are not cheap inks, it has to be admitted; £22 will buy you a fairly respectable fountain pen these days, after all. But some of Platinum’s ‘Classic’ colours are really easy on the eye – and if you are using this for a special event, it’s not going to be that big a dent in the stationery budget.

If this isn’t quite your cup of tea, but almost…  If you just need an iron gall ink and aren’t too concerned by the traditional blue-grey shade, then standard registrar’s ink will inevitably be quite a bit less expensive, and there’s plenty of that about (try Diamine). There are also other coloured iron gall inks available, usually at a lower price, from KWZ and Rohrer & Klingner.  Alternatively, if you’re a Platinum fan and just need something permanent, some of their pigment-based inks aren’t bad and their carbon ink is amongst the blackest of the black.

Our overall recommendation  We think these are pretty impressive inks, and conjure up a wider and more interesting palette than iron gall formulae can usually manage. If you have a sensible use for a permanent ink and fancy something a bit different, a 60ml bottle will do the job well.  Given the significant cost our tip is to pick one or two which really take your fancy rather than going straight for the whole set.

Where to get hold of some  We got ours direct from Cult Pens, and that’s a good place to start – they are the official Platinum dealers for the UK, and as it happens it’s where many of us have acquired our #3776s from too.

Thanks to  Cult Pens for donating the review samples. 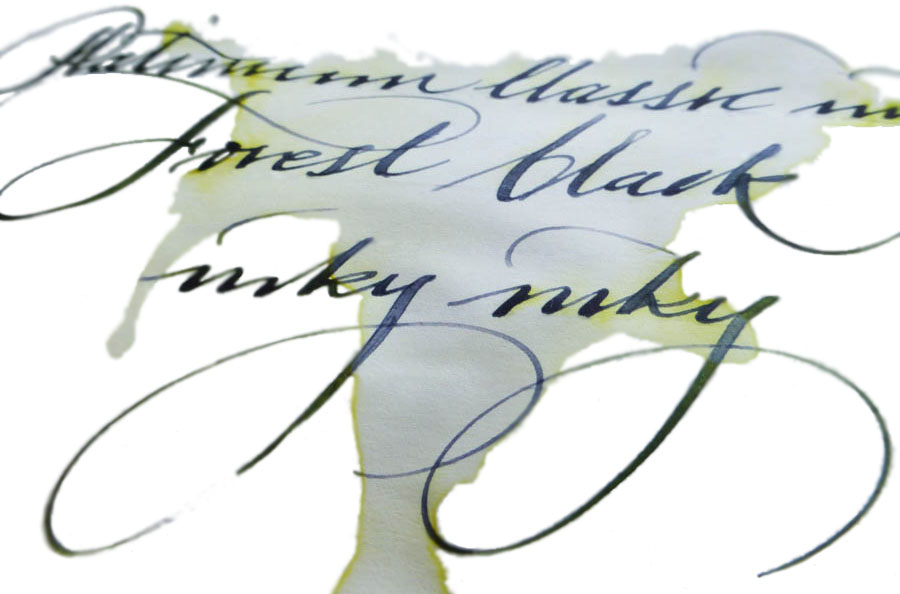 One thought on “Platinum Classic inks”