A little bit of history  There are various theories about where the Austronesian family of languages sprang from, but one of the more popular has the roots on the island of Formosa, or Taiwan as we know it today.  One of these indigenous tribes, the Truku, also gave their name to an area known as Taroko, now a national park. Rather curiously, but entirely suitably for our purposes, this notebook brand therefore indirectly translates as ‘human’.  So we sent samples to a few more humans to put that rather splendid heritage to  the test.

How it looks  It looks like a basic school text book, and a pretty cheap one if truth be told. Appearances are deceptive on both counts; underneath those dull brown covers lies a rather sophisticated offer – at a price to match.

How it feels  Gossamer-thin, unnervingly light and smooooooooooooth.  This is all thanks to the famous/infamous Tomoe River, which like the Taroko national park was a Japanese innovation but is evidently configured a whole lot more usefully in the ROC.

How it fills  This is a stapled notebook, so it’s pretty much pre-filled and the thin nature of the paper makes it difficult to alter that.  But for most purposes there are enough sheets to make use of.

Crucially, how it handles a fountain pen…  This is where the investment pays off. The Tomoe River paper is thick enough to handle a fountain pen nib without wrinkling (albeit it only just), and the smooth surface is a pleasure to write on.  Like other very smooth paper surfaces (Clairefontaine Triomphe, for instance) it shows the sheen well, too. It may be flimsy, but you’re unlikely to be disappointed.

Pulp! What is it good for?  It seems to be very popular for ink journals, thanks to the sheen, although it is perhaps a bit expensive just for leaking dribbly nibs on.  The low profile and featherweight qualities mark it out as an ideal travel journal, however. 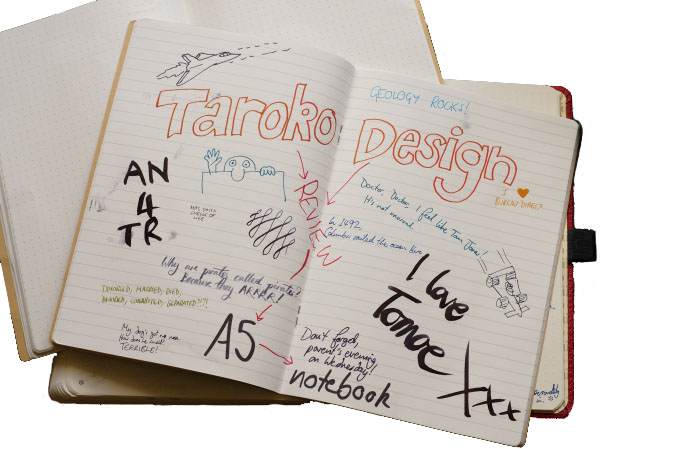 VFM  These are not the cheapest notebooks out there, by any stretch of the imagination. But if you are travelling and don’t want to be without some truly fountain-pen friendly paper, or if you want sneak some inconspicuous exotica which looks like a school exercise book into work, it’s not going to break the bank.

If this isn’t quite your cup of tea, but almost…  There’s nothing quite as thin and light as this on the market which we could recommend, but if it’s just the smoothness and sheen-loving finish you’re after then Clairefontaine’s A5 ‘age bag’ notebook does a similar job at about half the price.

Our overall recommendation  If you’re travelling or have a need for a genuinely nib-loving exercise book which you can squeeze into even the bulgingest briefcase, give it a go.

Where to get hold of one  It is sometimes possible to buy directly from Taroko studio in Taiwan, but it’s not especially straightforward.  Several of us have bought one from Bureau Direct in the UK and had no problems doing so, and the price is no greater so that looks like the smarter option in this case.

Thanks to Bureau Direct for kindly donating the samples.

One thought on “Taroko Design A5 stapled notebook”