A little bit of history  Once upon a time there was a nice chap from Texas called Will Hodges, who had amassed a rather spiffing collection of lathes and was wondering just what sort of toys to make for good boys and girls all over the world – not necessarily just for Christmas, you understand, but the sort of thing that you’d definitely have to be on your very best behaviour to deserve.  Flirting with the seductive magic mirror, or ‘Kickstarter’ as it is known to all the elves, he had immediate success with dark ballpoint doings which shall not be spoken of here – and then stepped into the light and started making proper pens!  Will’s first fountain pen, the Gist, is now available in a truly legendary array of materials including pretty much everything bar kryptonite, and has become a hit on both sides of the Pond.  Several of us had initially obtained one through aforementioned conjuring device, and then a wise stallholder in ye olde Ipswich Bazaar started selling them to passing scribblers here too… 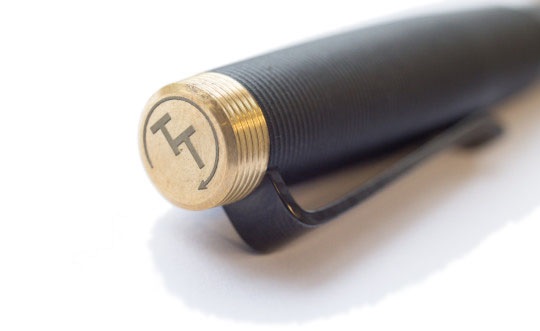 How it looks  As the brand name suggests (just for once, it’s entirely relevant and accurate) the whole pen has been precision-turned to make it a tactile pleasure to use – but we’ll come on to how it feels in a moment.  How it looks is, frankly, pretty much like the stereotypical alien mind-probe; with those eerily-accurate ripples and space-age materials, it wouldn’t look out place in Captain Kirk’s hands (its uses are far less sinister, though, unless you write left-handed of course). The very sharp-eyed may be able to spot some light marks from the lathe chuck on the barrel of the polycarbonate version (as depicted below), but it doesn’t greatly detract from the overall effect. 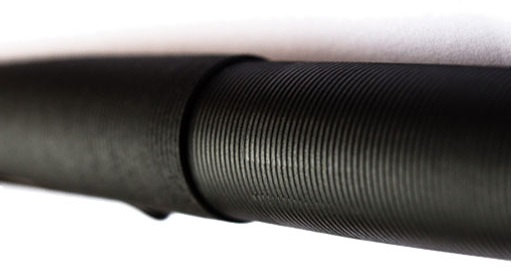 How it feels  Those ripples and ridges provide a good grip without discomfort, and most users have found this a pleasure to pick up and get writing with.  The weight varies considerably depending upon the materials chosen; the all-brass version is without doubt a nicely weighty pen, the all-polycarbonate version is feather-light, and the combinations of polycarbonate barrel and metal section concentrate the weight just where you most want it, near the nib.  Which feels best for you depends largely upon personal taste.  The only catch we detected was that the copper grip can be a little slippery on a warm day.

How it fills  This fills with a straightforward Schmidt converter (provided as standard), or international cartridges if you prefer.  For everyday practicality there’s nothing wrong with that at all.

Crucially, how it writes…  The Gist employs a big #6 Bock nib, available from Tactile Turn in steel, titanium and gold versions.  Bock’s steel nibs are firm but widely admired, and we’ve had no reports of any problems there.  The titanium nib is a bit more of an acquired taste as there is flex, but not always as much smoothness as flex fans generally like. The #6 Bock gold nib writes beautifully (as also seen on the Diplomat Aero and Kaweco Elite/Supra, for instance), albeit following quite an outlay.  If that range of options doesn’t suit, it is also possible to transplant a JoWo #6 into the Bock feed, as seen in the modified example below (displaying rhodium, ruthenium and zirconium from left to right).

Pen! What is it good for?  This is a well thought-through ‘every-day carry’ pen which can be comfortably used for long writing sessions and will serve as a sturdy workhorse.  Some of the all-metal versions are probably great for exhibitionist bling, too, but we’re not going to admit to being interested in that around here, oh no…

VFM  The Gist has to cope with transatlantic tariffs and the buffeting of currency exchange rates, so competing on price with European offerings is not always going to be easy. With a simple steel nib, the all-polycarbonate looks to us like fair, albeit perhaps not stellar, value at £70 – whereas just £30 more will get you the all-copper version which seems an absolute steal.

If this isn’t quite your cup of tea, but almost…  There’s nothing quite like the Gist, really, although there other pens which bear some comparison on the basis of the materials.  If you love the polycarbonate finish then the Lamy 2000 employs similar material, albeit with a much less visible nib. If you really want the brass Gist but are struggling with the import logistics, Kaweco’s Supra has a similar heft and also uses the Bock #6 nib. There are no other Tactile Turn fountain pen designs yet – although just imagine this shape scaled-up to fit JoWo’s #8 nib… hmm, maybe next Christmas.

Our overall recommendation  Try a friend’s Gist first – it’s a bit of a ‘Marmite proposition’ in some guises – but if you like it, buy one.  Individual pen-makers who connect with writers and adapt to their needs like Will does deserve their success – and maybe, just maybe, you’ve been good enough to deserve one of his pens.

Where to get hold of one  Newcomer e-tailer iZods is stocking a broad sample of the Gist range in the UK, including the titanium and copper versions here.  If you want the full range including all the stock options, you can also buy direct from Will here, although beware of those import taxes.

Thanks to  Roy at iZods for lending John a Gist to play with.